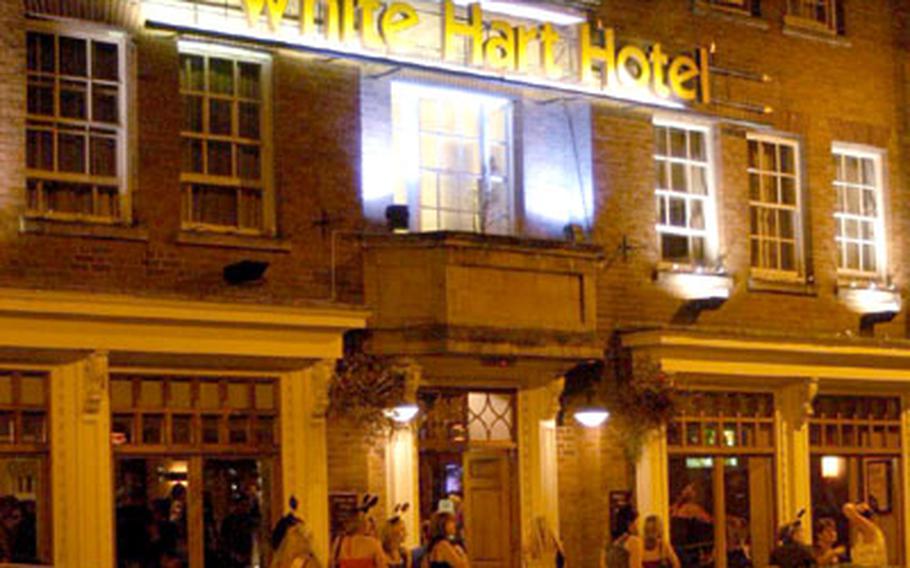 NEWMARKET &#8212; When unsure of where to find a popular, techno-and-liquor-heavy bar in an unfamiliar town, it helps to heed old granddad&#8217;s advice for such situations: Follow the girl in the Chewbacca boots.

It&#8217;s a tactic that rarely fails, and in Newmarket on a recent Saturday, she walked directly past the strip of cozy, murmuring pubs that populate the north end of High Street on the downtown drag and straight into a tall, floodlit building with a bouncer at the door.

Packed to the I-beams and vibrating with electronic rhythm, the White Hart Hotel was exactly the kind of place Chewbacca Boots would meet her friends for a round of shouting over cigarettes and shots of some ungodly iridescent liqueur.

Walking in just after 10 p.m. and beginning to wiggle through the crowd toward the bar, there are two things immediately evident in the White Hart: Smoking is still allowed and thoroughly enjoyed here, and it&#8217;ll probably take a little work to get a beer.

Shaped like an hourglass with a bottleneck at the bar in the middle, the White Hart has the feel of an establishment meant to begin an evening of Red Bull and indiscretion.

Footsteps crunched with the glass on the floor, elbows got wet from the beer on the bar and before long there was a fight between two girls near the back.

It was a charged atmosphere that almost seemed out of place in the trendy, brightly lit bar.

The furniture and decoration in the White Hart have a modern, upscale feel to them (even the enormous disco ball above the bar has asymmetrical reflective tiles), which gives the impression that it could be a comfortable place to enjoy the hotel&#8217;s menu at an earlier hour.

At the front, to either side of the tall doors, are two seating sections centered in giant bay windows that look out onto High Street &#8212; one set up for eating, the other populated by soft sofa chairs circled around coffee tables.

At the back, there&#8217;s more of the same, with a raised eating area, a couple of booths along one wall and more of the sofa chairs, this time resting on carpet.

By later in the evening, the kitchen is shut down and the White Hart&#8217;s function as a stopover on the way to the nightclub around the corner takes effect. Rife with makeup, laughter and flirtation, it&#8217;s a single-person&#8217;s clientele with as many just-turned-drinking-age teens as over-50s. The shirts are tight, the hair is dyed and gelled and the midriffs are absolutely everywhere.

Food: Mid-range prices for a pleasingly urban menu including appetizers, specialty ciabattas and wraps, &#8220;sharers&#8221; for groups and full meals for 6 pounds to 9 pounds.

Drinks: The standard assortment, plus a number of bottled beers, including Corona and Budweiser.

Ambiance: On Friday/Saturday nights, frenetic. Busy, loud and smoky with a crowd two-deep at the bar.

Service: As can be expected at a bustling bar filled with would-be clubbers. There are lots of frantic bartenders, but shouting is common and jostling for attention is required.