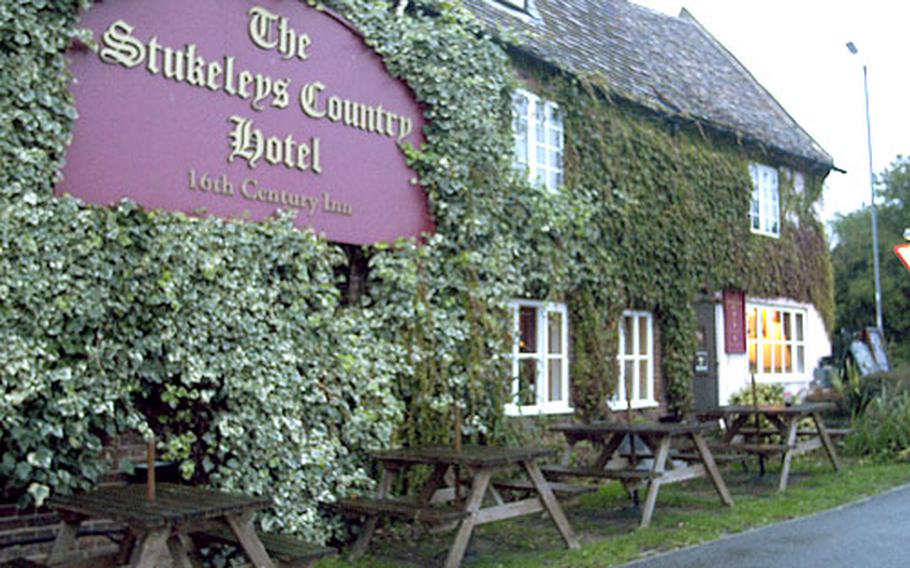 The Stukeleys Inn&#39;s front door is located about a mile south of the main entrance to RAF Alconbury, England. The small, comfortable bar, restaurant and inn is a great place for a first date or a quick off-base dinner and pint. Americans call the inn the Pink Pub because its side wall is painted pink. (Jason Chudy / S&S)

The Stukeleys Inn&#39;s front door is located about a mile south of the main entrance to RAF Alconbury, England. The small, comfortable bar, restaurant and inn is a great place for a first date or a quick off-base dinner and pint. Americans call the inn the Pink Pub because its side wall is painted pink. (Jason Chudy / S&S) 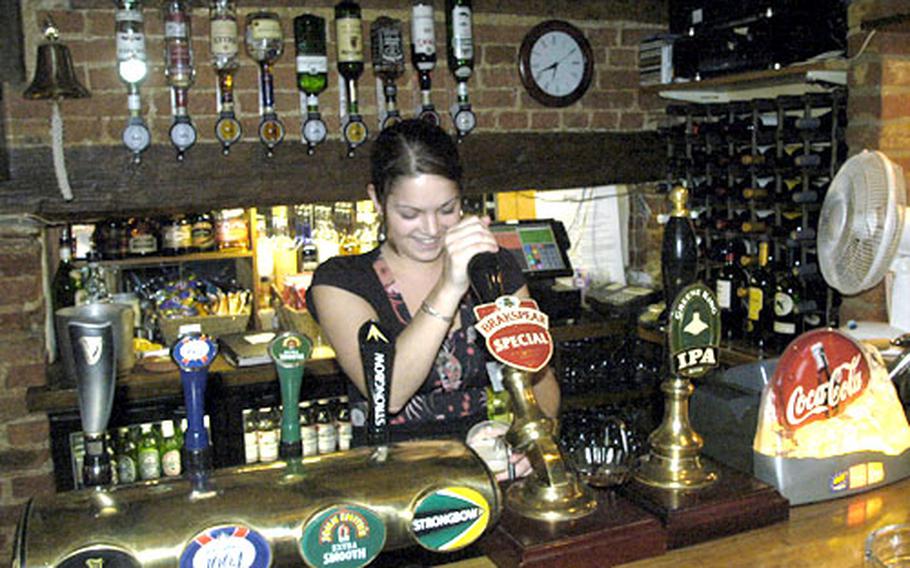 The place is known by Americans on base as the &#8220;pink pub&#8221; because the wall that faces the main road is painted pink.

On a recent Sunday night, the small bar, which is the size of a small living room, was filled with area residents &#8212; rather than Americans &#8212; and 1980s pop hits played a little louder than elevator music, but not loud enough to be a distraction.

Stars and Stripes was told Stukeleys is more of a family place, rather than a place for younger, single patrons, and the clientele bore that out. A husband and wife, celebrating their anniversary with their young daughter, took one of the tables in the barside dining area. Shortly after our arrival, a baby and mother came in, bellied up to a table in the bar area, and as mom sipped wine, baby downed a bottle herself &#8212; of milk, of course.

There are about a half-dozen beers on tap &#8212; two of which the young bartender had to draw using large bronze taps &#8212; at the small, brick bar. And while there&#8217;s an extensive menu in its barside dining area or full-service restaurant in back, Stukeleys is the kind of place better suited to take a special friend, rather than a large group of friends.

It&#8217;s quaint enough to make a nice impression on a significant other. The few younger locals at the bar were quick enough with quips or jokes, wondering if we were Japanese tourists as we snapped pictures outside and inside the inn.

Stukeleys also has nightly menu specials. Although it has some traditional pub foods, its menu is a little more upscale, without being that much more pricey. The chicken and leek pie, complete with French fries and steamed vegetables, for under 10 pounds was very good. A pint of its Brakspear Special beer made the meal that much better.

The inn holds a traditional Sunday roast, and is open daily for English breakfast or brunch on weekends.

In addition to the bar and restaurant, the inn has eight rooms that run from 69 pounds to 95 pounds a night, breakfast included. On Fridays and Saturdays the inn offers a special for 25 pounds per person, per night, including brunch or breakfast.

For younger patrons looking for a night out on the town, Stukeleys may not be the place to go, but for those wanting a quick trip off Alconbury for some good food and a quick pint, this place is definitely worth a visit.

Food: The inn&#8217;s Web site describes it as &#8220;English with a touch of spice&#8221; and the menu has everything from traditional pub food to more refined meals. Varying hours for meals, depending on day of the week or whether someone&#8217;s staying at the inn. Times listed on its Web site.

Ambiance: Relaxed and comfortable in its small bar. Good for families and those trying to impress a special friend.

Service: Very good. The inn&#8217;s bar and adjacent dining area is small enough that, even with just a bartender service, it was prompt.