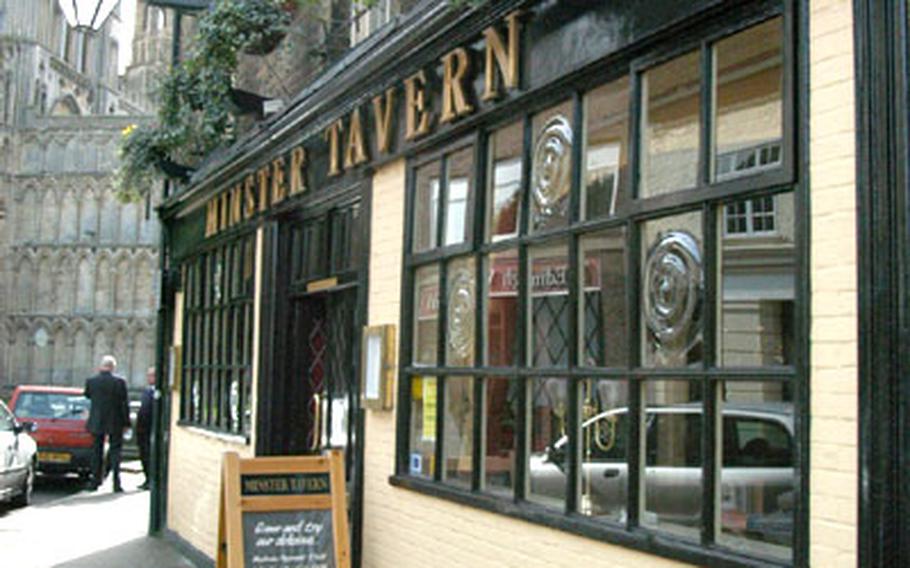 The Minster Tavern in Ely, just a stone&#39;s throw from the stately Ely Cathedral (in background). (Ben Murray / S&S)

There are places to go as a drinker when you want the thud of Friday-night bass and the clack of billiard balls with your tequila, places where the seats are already taken and the bathrooms are crowded.

And then there are pubs that just seem to beckon through their open doors on a sunny weekend afternoon with a quiet, inviting atmosphere and the promise of heavy foods and dense ales to thaw the bones.

Minus a TV and lacking a respectable set of woofers, the Minster Tavern in downtown Ely is one such pub, a bright and appealing locale that issues a compelling summons to step in and heat the marrow &#8212; and the gray matter &#8212; on a bracing October day.

Built nearly in the shadow of the stately Ely Cathedral, the Minster offers visitors sort of a three-tiered approach to hospitality that incorporates the three honored pastimes of such establishments: eating, drinking and smoking. Guests entering through the front find themselves in what could be called the imbibing area, with ample floor space in front of the bar and tables hugging the walls.

There&#8217;s no smoking at the bar, but for those in the habit, there is a horseshoe-shaped alcove in the center of the pub, with leather seats and couches surrounding a central (though unlit) fireplace.

Farther in the back, the Minster has a surprisingly well-lit eating area (also nonsmoking) that sees much of the foot traffic during the day, with patrons clinking silverware and sawing the Sunday roast (5.95 pounds.)

For special features, however, the action is back at the bar, where no less than 12 taps greet the thirsty with an appealing range of brews. Standards are light lagers such as Foster&#8217;s and Staropraman (a Czech beer), and Grolsch, Guinness and Stella Artois. And, the Minster also always keeps three &#8220;guest&#8221; ales on tap &#8212; three individually selected kegs from around the isles kept only until the barrel runs out, when it is replaced by something different.

A recent standout among these guests was a rich Scottish ale from Orkney called Dark Island. A thick, hair-on-your-chest ale with a smooth, chocolate aftertaste, the selection also was paired with a gourmet sausage in an intriguing meal special at the tavern. Minster chefs offer an ale with bangers such as &#8220;lamb and mint&#8221; or &#8220;beef and black pepper&#8221; sausage for a combination dinner and drink (5.25 pounds.)

Grab your knife fast if you order, however, because the bar staff also claims there&#8217;s a ghost in the building, which dates to the 10th century, though the pub has only been operating since about 1817. An unnamed and generally harmless specter, the spirit has been known to throw cutlery around the room and flip the lights on and off, according to the bartender.

Patronized by a mix of cathedral tourists, local folk out for a pint and a few old-timers lost in the smoke and foam, the Minster Tavern might not be a late-night destination for the young and restless, but for a quiet stop on a lazy afternoon, it&#8217;s worth a turn at the taps.

Know a pub you&#8217;d like investigated by the Bar Sleuth? E-mail: uknews@mail.estripes.osd.mil

Food: Thorough menu of pub standards with a unique sausage special that pairs a gourmet flavored sausage with an ale from the same region.

Ambiance: Mixed &#8212; regulars haunt the tables in the front windows, smokers take up the middle lounge and diners head for the back (a nonsmoking section). Generally convivial, but not so cozy as to be a place to go read Chaucer.

Service: Staff was gracious and cheerful on a quiet Sunday, but some Internet reviews claim long waits for both food and beer when the pub is full.