The Bar Sleuth: How do you bend an elbow with no elbow room? 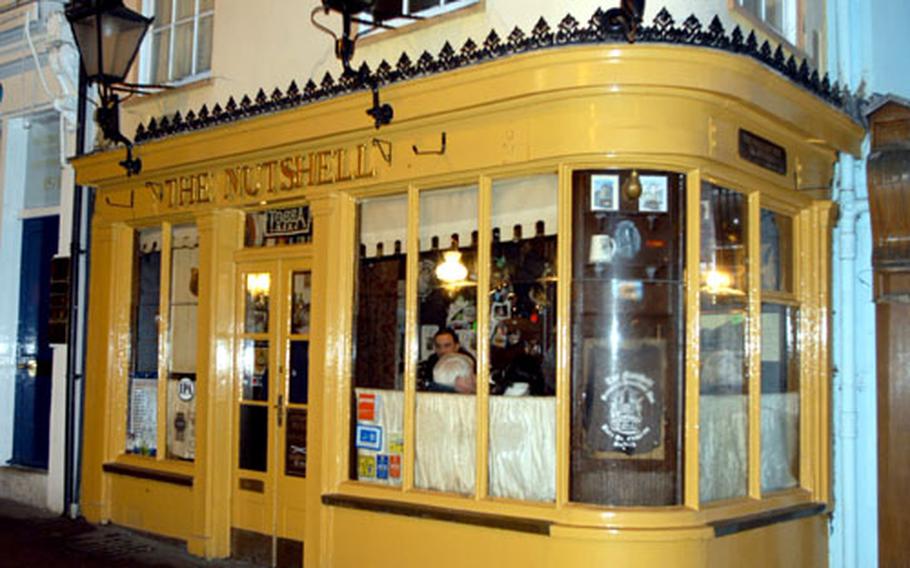 The Nutshell is small, but tough to miss with its distinctive yellow exterior. (Bryan Mitchell / S&S)

The Changing of the Guard.

If you can&#8217;t put a check behind the last English must-see, don&#8217;t fret. The legendary pub is a short drive from RAF Lakenheath or Mildenhall and is open seven days a week.

The Nutshell &#8212; measuring 15 feet long by 7.5 feet wide &#8212; is a two-minute walk from the town square in the picturesque historic district of this charming Suffolk town. The address is 17 The Traverse, but you are better off asking just about anybody walking through downtown where it is and they can quickly point you in the right direction.

If you&#8217;re lucky, you&#8217;ll stop in for a brew &#8212; six are on tap, but drinking the locally brewed Greene King is the civilized thing to do &#8212; and share a conversation with landlord Martin Baylis, whose affinity for Americans is surpassed only by his quick wit.

Despite a plethora of listings on the Internet for this Guinness Book of World Record holder, Baylis is the best man to tell the pub&#8217;s colorful lore.

Baylis can tell you about the day the pub beat its own record for maximum capacity by packing more than 100 revelers into the corner pub.

On most days, though, the pub holds no more than a dozen folks.

The cat is surrounded by scores of currency notes from around the world, although the majority are dollar bills.

Holding the title of Britain&#8217;s smallest pub is more than pouring cold beers and displaying deceased felines. Every now and then, the bar has to defend its title.

A few years ago, the staff of Smith&#8217;s Arms, a pint-size pub in Godmanstone, challenged The Nutshell to a soccer match to settle the squabble over which pub was tinier.

Until someone is entrepreneurial enough to find a smaller space within a more charming location and crafty enough to make so much out of so little, The Nutshell&#8217;s title is secure.

Drinks: Six beers on tap, but the locally brewed Greene King is recommended. Prices are reasonable, certainly not overpriced.

Food: None. You wouldn&#8217;t want to even think about ordering food here anyway. There&#8217;s a dead cat hanging from the ceiling.