The bar sleuth: Bird in Hand held up as a family place The Bird in Hand is a typical British pub and restaurant located a short walk from RAF Mildenhall, England. (Jason Chudy / S&S)

The Bird in Hand is a typical British pub and restaurant located a short walk from RAF Mildenhall, England. (Jason Chudy / S&S) 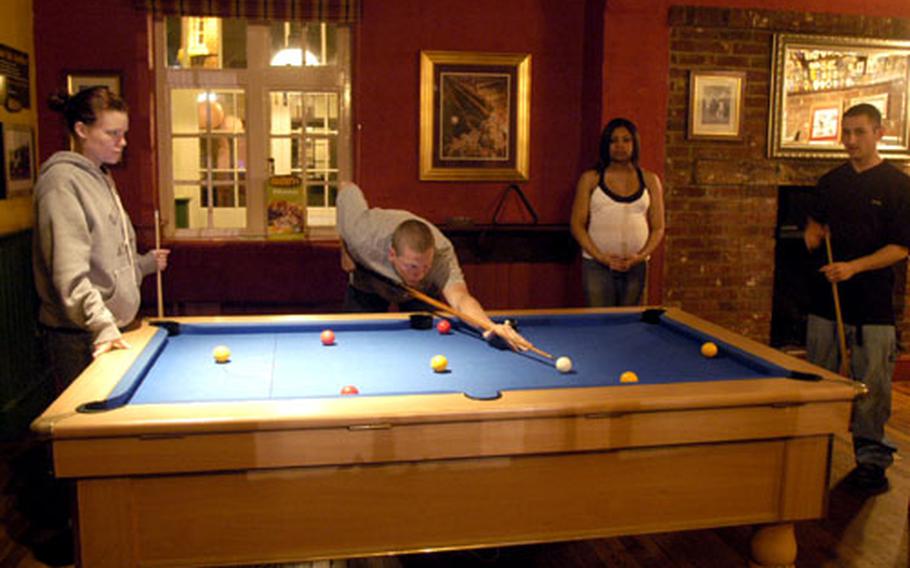 Jason Daffern makes a shot while playing eight-ball billiards at the Bird in Hand pub near RAF Mildenhall recently. With Daffern are, from left, wife Jen, and Rosemary and Philip Harville. (Jason Chudy / S&S)

If the old saying that a bird in the hand is worth two in the bush, then airmen assigned to RAF Mildenhall have something worthwhile in the Bird in Hand pub and restaurant just outside the base&#8217;s fence line.

Bird in Hand is about as stereotypical a &#8220;British pub&#8221; as it gets for an American. It serves plenty of beer and full plates of filling food in its comfortable, homey three rooms.

But since it&#8217;s been a British pub for more than 70 years &#8212; before American airmen started calling Mildenhall home &#8212; maybe the stereotype began because of places like this.

And Bird in Hand balanced the needs of its local British clientele on a recent weekday night with the dozen or so American couples that wandered in for dinner or games of eight-ball.

Throughout the evening, a young bartender repeatedly reminded Stars and Stripes that Bird in Hand was a &#8220;family place.&#8221;

Since the majority of the patrons, with the exception of a talkative local businessman and the questioning out-of-town reporter, seemed to be couples, it wasn&#8217;t a stretch to see that at least on this evening she was right.

Music videos played on a handful of video monitors, low enough so couples didn&#8217;t have to lean in to hear each other as they spoke but loud enough to fill the bar with music.

Bird in Hand has live entertainment a few times each month, with upcoming bands listed on a simple piece of paper hanging next to the bar. On those nights, some said, patrons do need to lean in to hear each other.

The loud, live music is about as wild as it gets nowadays. Patrons&#8217; reminders of recent, but infrequent, fights between bargoers, and wet T-shirt contests from decades ago, brought more calls of &#8220;This is a family place!&#8221; from the bartender as she passed out pints.

A full menu of dishes ranging from lasagna to bangers and mash (sausages and mashed potatoes in gravy) was served in both the restaurant and bar area, proving relatively inexpensive but hearty food.

They also serve the traditional Sunday dinner of roast beef, a roasted half of chicken or pork for 5.95 pounds.

Ambiance: Lively, but not too loud, and well lit. Nice place for family or friends.