The Bar Sleuth: At home at The Smoke House 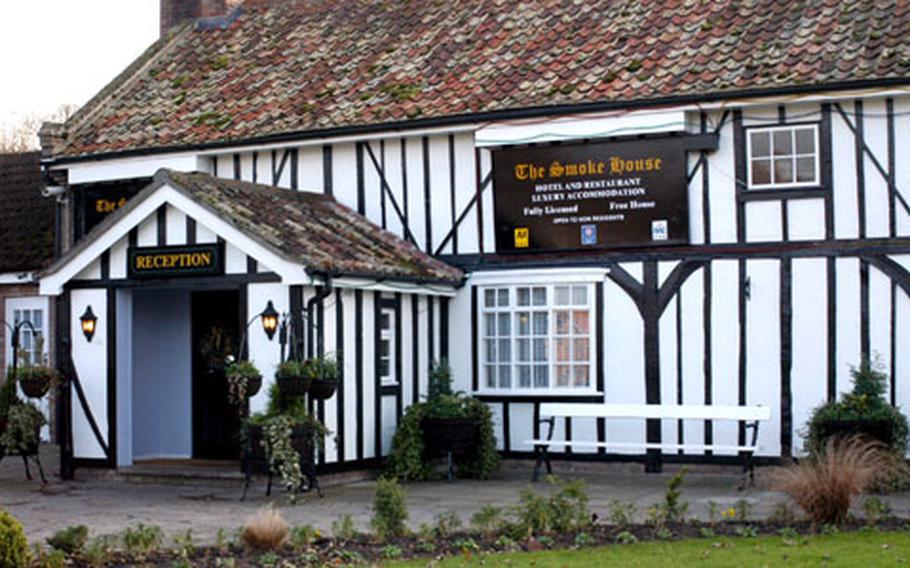 BECK ROW &#8212; The Smoke House is the type of restaurant that invites you in for a beer and cajoles you into staying for dinner.

The kind of place where airmen from Nebraska on temporary duty kill time by the bar reflecting on over-the-top &#8220;American Gladiator&#8221; stunts while British businesswomen sip Chardonnay during their lunch break.

The sort of establishment where a fire welcomes restaurant guests by day and another is ignited by night to cozy up in the Inglenook Bar.

American airmen and their families have been frequenting The Smoke House restaurant and bar for three decades. For many, the soft glow of the fires complemented by the dark oak interior set the mood for a home away from home.

The restaurant is connected to a 96-room hotel that was constructed primarily to lodge Americans and their families. Over the years, however, the Americans have become less of a mainstay and the lodge now caters to a large number of British travelers as well, according to sales executive Lee Chipchase.

Still, more Michigan and Texas accents can be heard echoing in the restaurant than those from East Anglia or Essex. Chipchase said The Smoke House regularly hosts parties for groups from the base, including the recent going-away bash for Maj. Gen. Michael Gould before he departed for Mississippi.

The Inglenook Bar, where you can find a comfortable corner to take in the ambience, is a low-profile place to have a sandwich and brew after a long day on the flight deck.

On tap, the bar offers Cafrey&#8217;s, Worthington, Grolsch, Carling, Scrumpy Jack and Guinness. The bartender also can whip up a liquor drink or offer a glass of wine for the sophisticated sort.

As for food, it was good enough to merit returning for a second dip into The Smoke House&#8217;s culinary pool.

On the second go around, the Special Club Baguette was just right: a slightly toasted long roll with grilled chicken, bacon, lettuce and tomato and a side salad. If you are eating with a spouse, this may be enough to feed you both.

Location: Beck Row, Mildenhall. Directly across the street from Domino&#8217;s Pizza on the road between the back gate and the main gate of RAF Mildenhall.

Drinks: Six beers on tap that are all reasonably priced. Liquor and wine also are available.

Food: A step up from the regular pub grub. The portions are large and filling. The presentation wasn&#8217;t up to five-star standards, but well above average.

Service: On two visits, service was prompt and professional. Expect nothing less.