The Bar Sleuth: A tale of two moons 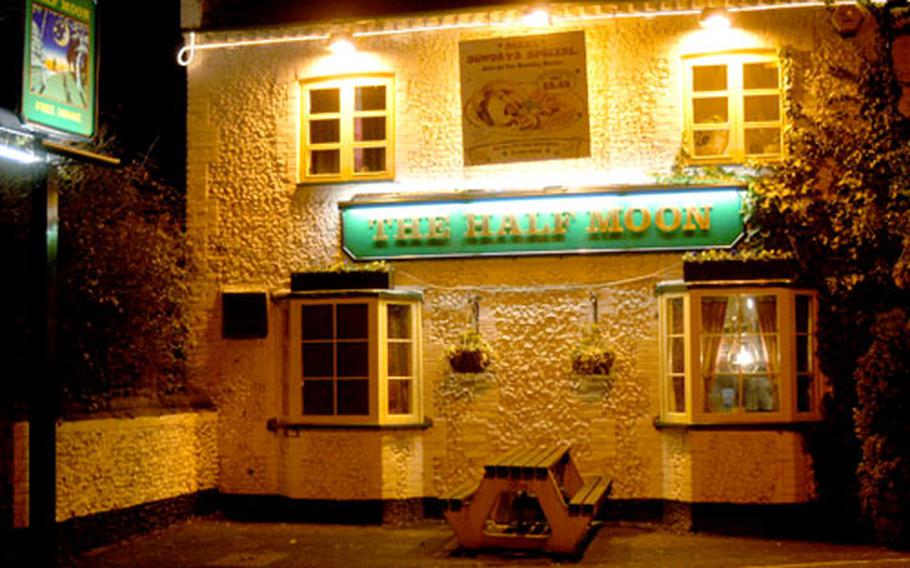 The front facade of The Half Moon in Mildenhall, a short distance from the nearby U.S. base. It serves standard fare from the The Hungry Horse chain — big, heavy meals at a palatable price. (Ben Murray / S&S)

The front facade of The Half Moon in Mildenhall, a short distance from the nearby U.S. base. It serves standard fare from the The Hungry Horse chain — big, heavy meals at a palatable price. (Ben Murray / S&S) 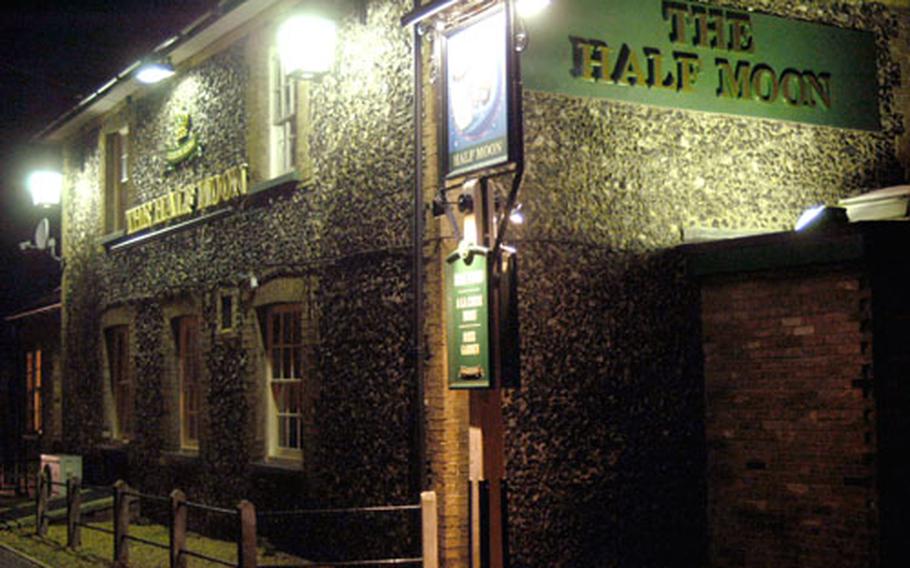 Perched on the edge of town, The Half Moon pub in Lakenheath, England, sits directly on the end of main street. It has two extensive menus, bar and a la carte, offering better than the average pub food. (Ben Murray / S&S)

It&#8217;s a question residents traveling between RAF Lakenheath and RAF Mildenhall may have asked themselves as they shuttle between the two towns outside the local air bases.

Similar in size, outward appearance and even lettering on their signs, the two might seem jointly run to passers-by. But while both are Greene King pubs (i.e. they sell exclusively Greene King ales) a look on the inside reveals two infinitely different establishments.

One (Lakenheath) is a quiet, locally owned watering hole with an experienced chef in the kitchen. The other is an inviting but slightly kitschy chain establishment serving big, Chili&#8217;s-style meals.

For local patrons, it&#8217;s a choice between atmospheres: hushed and small with a side of lobster bisque, or sparkling and open, where the 20-ounce Megasaurus (it&#8217;s a rump steak) is only 9.99 pounds.

The differences in the two Half Moons stem from their management styles. The one in Lakenheath is run by proprietor Rupert Sandells, a local manager who has worked in kitchens from Sydney, Australia, to towns around England.

As a chef, he&#8217;s developed two extensive menus that run the gamut in both price and selection. The bar menu, for instance, has a long list of English favorites for 8 to 9 pounds each, then branches out into seafood (swordfish, smoked salmon pie, whole-tail scampi), with vegetarian and burger options.

Additionally, Sandells has an a la carte menu with the more gourmet options, from a lamb&#8217;s liver Lahore starter (4.95 pounds) to baked pheasant and wild mushrooms (11.95 pounds).

The pub has the regular range of lagers and Guinness, is low on the lighting and scattered with regulars.

The Mildenhall Half Moon is its opposite in many respects. Run by Greene King, it has the feel of the big, comfy chains, such as TGI Friday&#8217;s, that specialize in large meals with mid-range prices and names such as Good Cod Almighty (a deep-fried fillet, 5.99 pounds).

The staff members wear uniforms, and the lights are turned all the way up in the dining room and the bar area, both of which don&#8217;t permit smoking.

The Mildenhall Half Moon also has a side room where patrons can light up, shoot some pool and watch football on a screen the size of a king-sized mattress while drinking from the rows of taps. As a bar, it also has a vast collection of sweet alcopops (ready-mixed soft drinks containing alcohol) and pre-made mixed drinks popular with the younger set, many of whom were in attendance on a recent weeknight.

The establishment seems to attract a little more foot traffic than the Lakenheath Half Moon, and the food prices are, on average, slightly lower, set at the standard for Hungry Horse, the chain that provides the victuals.

Where the two Moons are similar is in the extras they provide: quiz nights, carvery specials, occasional live music and karaoke.

Though different in the ambiance and mood, each does equally well in the niche it occupies and can offer local airmen and their families a pair of diverse local experiences all under one easy name.

Drinks: Greene King ales, and the usual allotment of liquors and beers.

Food: Two extensive menus (bar and a la carte) offering everything from vegetarian lasagna to sausage and mash to a whole pheasant.