Spc. Dylan Nice, a U.S. Army Reserve watercraft operator from the 949th Transportation Company, a unit which specializes in watercraft operations, cargo and watercraft engineering, climbs a ladder from a rescue boat for a series in Baltimore in April 2017. The Army is considering shuttering its National Guard and Reserve mariner units. (200th Military Police Command)

Spc. Dylan Nice, a U.S. Army Reserve watercraft operator from the 949th Transportation Company, a unit which specializes in watercraft operations, cargo and watercraft engineering, climbs a ladder from a rescue boat for a series in Baltimore in April 2017. The Army is considering shuttering its National Guard and Reserve mariner units. (200th Military Police Command) 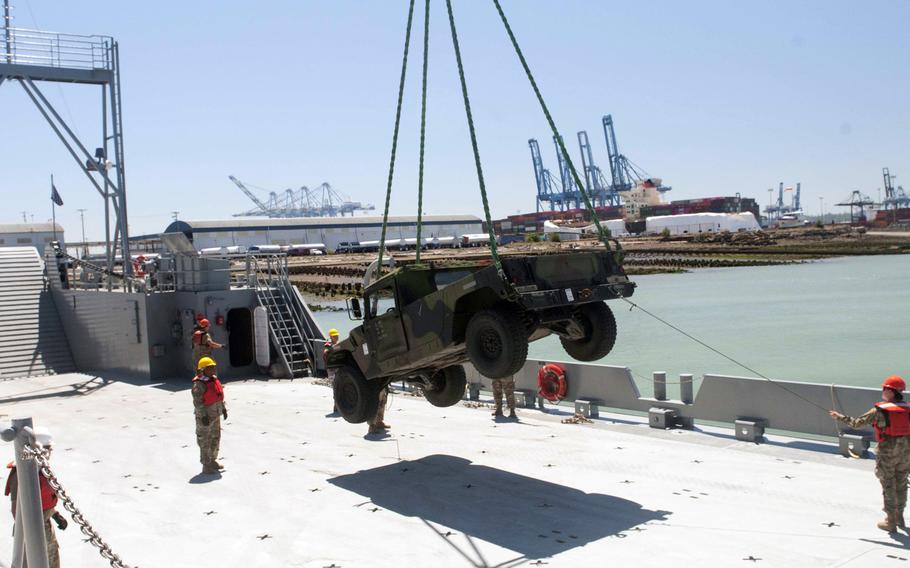 Army Reserve soldiers load the first of six vehicles onto the U.S. Army Vessel Malvern Hill LCU 2025 during an exercise on Joint Base Lewis-McChord, July 11, 2018. The Army is considering shuttering its National Guard and Reserve mariner units. (Exercise News Day)

The Army’s little-known but sizable maritime fleet may be facing cuts, as the service considers eliminating dozens of boats and forcing hundreds of reservists out of their jobs in the next two years.

The service’s watercraft deliver supplies, assist in dive operations and land troops on beachheads during combat operations. But many of those boats are aging, costly to maintain and require upgrades to keep up with modern warfare, according to government reports.

The Army is mulling plans to shutter its National Guard and Reserve component watercraft units, according to a PowerPoint slide deck dated Jan. 8, obtained by Stars and Stripes. The plans come amid warnings of a looming crisis in the military’s transport fleet necessary for carrying troops, equipment and supplies at a time when China and others are spending more on coastal warfare capabilities.

The Army confirmed that a formal analysis of its fleet inventory is underway.

“The Army is assessing its watercraft program to improve readiness, modernize the force and reallocate resources,” spokeswoman Cheryle Rivas said via email.

Soldiers concerned about the cuts told Stars and Stripes they have been briefed on the proposed reductions.

Last June, Army Secretary Mark Esper decided that the Reserve would “divest all watercraft systems,” according to the January briefing. This was prepared in part by Maj. David Finn, chief force manager for the New Orleans, La.-based 377th Theater Sustainment Company, which oversees most of the Reserve’s boats.

The unit could see eight of its watercraft units and civilian maintenance facilities shuttered under the proposal, which would affect at least 746 positions, according to the slides. The move would reduce the size of the regular Army’s seagoing capabilities and “potentially eliminates” all Reserve and National Guard Bureau watercraft systems and support, according to one slide.

It would also halt maintenance spending as well as curtail recruitment and training for mariners until a final decision is made on the disposition of the craft.

Reserve units operated 27 of the Army’s fleet of 105 vessels, according to a statement from last July.

An Army memo quoted in the slides states that Esper directed the Army’s partial divestment and reorganization in preparation for its 2020 budget. Esper told reporters at a conference last fall that the Army had found $25 billion that could be cut and reinvested in other projects.

Notes accompanying the slides point out that units are typically identified for inactivation 2-5 years out.

“What makes this situation different than other in-activations is the short notification, the number of units and positions identified, and the unique equipment and capability being in-activated,” notes for the slides say.

The Army’s review of the boat units comes amid dire warnings about shortfalls in military sealift capabilities.

Many of the transport vessels in the Navy’s Military Sealift Command — which are on average 40 years old — need replacement, a 2017 Government Accountability Office report found.

Meanwhile, defense planners expect greater challenges in massing forces in the event of combat in the Pacific or Europe, said John H. Pendleton, a director at the GAO who oversaw the 2017 report.

The Army has also told Congress that delays in the Navy’s efforts to upgrade its sealift capabilities could undermine its ability to deploy troops as soon as 2024.

The Navy’s large sealift ships ferry most equipment overseas, but many can’t land at austere ports and hostile beaches. The Marine Corps does not have enough ships to train for a full-scale amphibious assault, like one that would be required to take on a “near-peer” opponent like China or Russia.

Army mariners provide a critical link and are trained to land troops and equipment ashore under fire in smaller boats, veterans of the job said. The Army has carried out notable wartime amphibious landings, such as the D-Day and Sicily invasions of World War II, and the Inchon landing during the Korean War. Its mariners played a significant support role during Operation Desert Storm in Iraq and are also called on to support humanitarian missions.

Its inventory today includes eight types of watercraft, from small “Mike boats,” landing craft that date from the Vietnam War, to football field-length vessels able to carry up to 15 M1A2 Abrams tanks at a time. The service also operates tugs, floating cranes, barges and other support craft.

The Mike boats are needed for landing small forces on hostile beaches, but they are currently unable to carry heavier modern tanks and now considered too slow to land ashore under fire, an Army Command and General Staff College research paper found in 2015.

As a result, the service needs to decide whether to keep, get rid of, or contract out the capabilities provided by the Mike boats, Lt. Col. Philip S. Raumberger, the research paper’s author, told Stars and Stripes.

Because the boats are older, maintaining them gets more expensive each year, with costs running at $600,000 a year per boat in 2004. In 2017, the Army awarded a $1 billion contract to build 36 modern landing craft.

Divesting the boats could save money and free up funds elsewhere, but that would get rid of the Army’s only way to move tanks around the coasts, should that need arise later.

“The question is: How much money, how much effort do you put on something that might be need in the future, versus something that is needed now?” Raumberger said.

If the Army goes through with its proposed cuts, Reserve mariners would be reassigned as truck drivers, administrative specialists or supply logisticians.

“Is it really resource-efficient to retrain a 20-year boat driver into something else?” said Michael W. Carr, 63, a retired chief warrant officer four who served as an Army Reserve mariner for half his 30-year military career. “The Army’s plan appears ill-conceived and will lead to devastating consequences.”

It’s unclear what would happen to the Reserve units’ boats, but some could be turned over to the active duty component, according to a part of the briefing prepared by officers from the 377th TSC’s logistics department. Others would be stripped of their military markings and turned over for auction.

Some 18 of the service’s 35 Landing Craft Utility boats, 174-foot workhorses capable of hauling hundreds of tons of cargo and troops, could be sold off, Carr wrote in a blog post on the maritime website gCaptain.

The prospect of losing the boats is a grim one for Carr, who served in the Baltimore-based 949th Transportation Company.

“My fear is the Army doesn’t understand what we have or what we’re getting rid of,” Carr said in a phone interview. “I am concerned the Army will have to respond to something in Southeast Asia or South America, somewhere with hostile shores or underdeveloped ports, and we will need this capability and we won’t have it.”