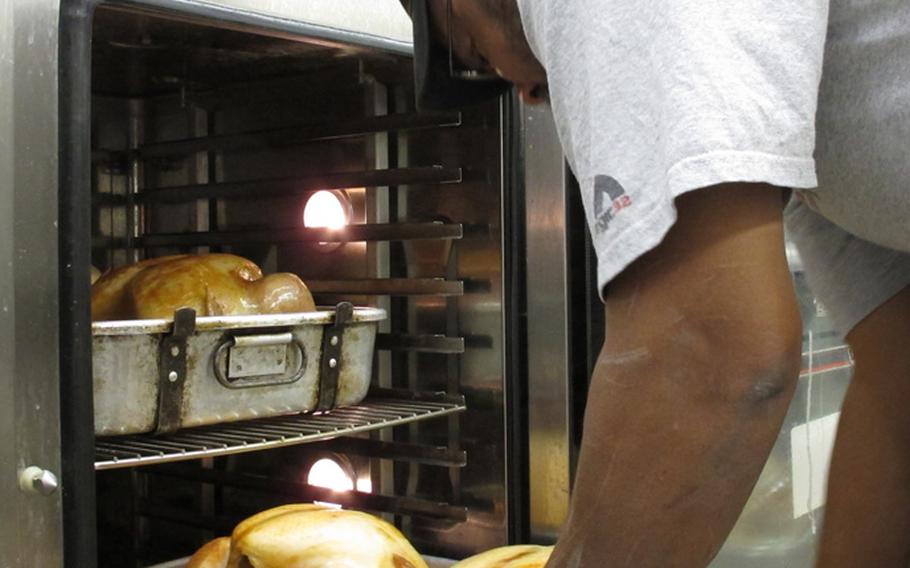 Buy Photo
Haze Hardy, a cook team leader at the Patch Barracks dining facility, checks how the turkeys are progressing in the oven. The cooking team at Patch was busy all day Wednesday getting the food ready for Thanksgiving dinner. (David Rogers/Stars and Stripes)

Buy Photo
Haze Hardy, a cook team leader at the Patch Barracks dining facility, checks how the turkeys are progressing in the oven. The cooking team at Patch was busy all day Wednesday getting the food ready for Thanksgiving dinner. (David Rogers/Stars and Stripes) 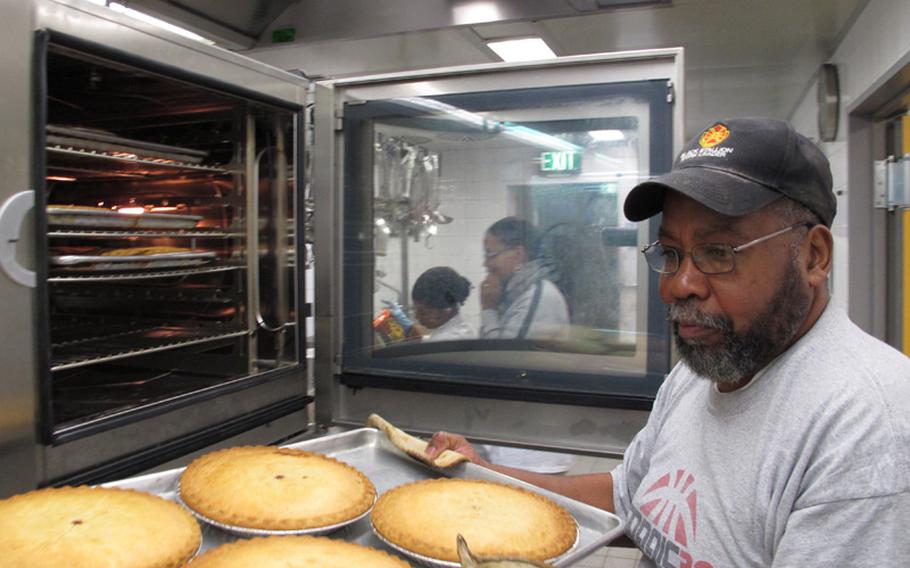 Buy Photo
Haze Hardy, a cook team leader, helps prepare some of the 222 pies that will be served for Thanksgiving at the Patch Barracks dining facility in Stuttgart. (David Rogers/Stars and Stripes) 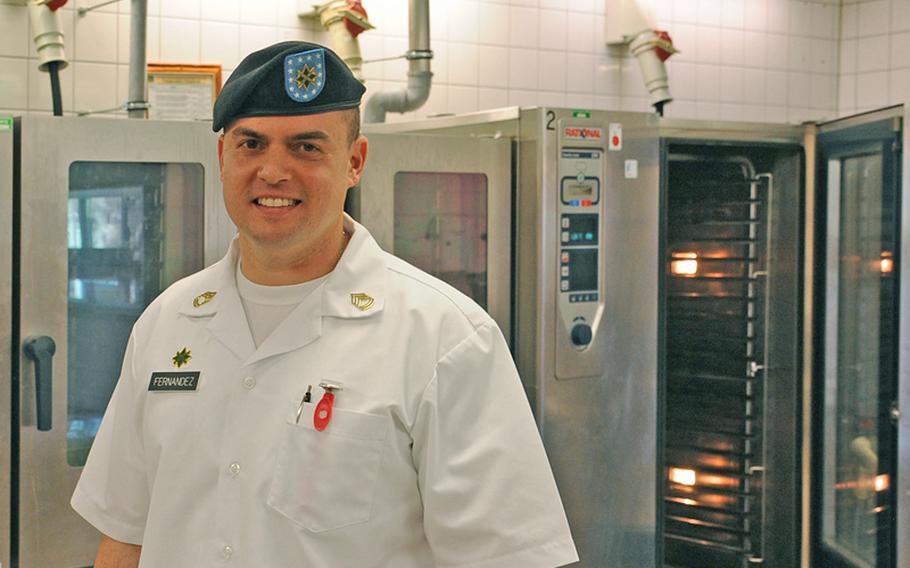 Buy Photo
Sgt. 1st Class Jose Fernandez, the assistant manager of the Kleber dining facility has what he says is the most important tool of his Thanksgiving preparations in his pocket: a meat thermometer. He will be one of three chefs who was to cook all night on Wednesday for Thursday&#39;s big Thanksgiving dinner. (Michael Abrams/Stars and Stripes) 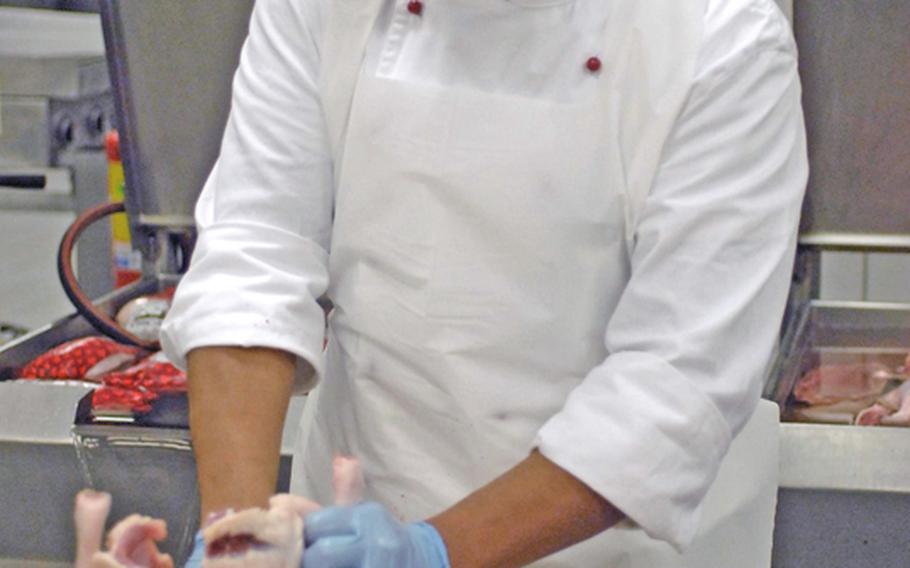 Buy Photo
A dining facility worker at Wiesbaden Army Airfield carves into a duck on Wednesday as preparations were in full swing for Thursday&#39;s Thanksgiving meal. (Mark Patton/Stars and Stripes) 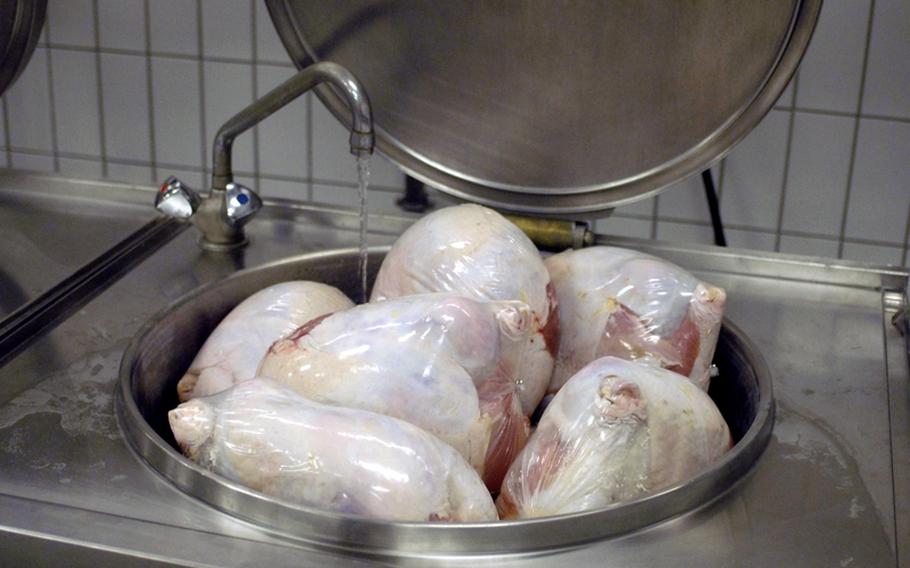 Buy Photo
Turkeys were thawing at the Wiesbaden Army Airfield&#39;s dining facility on Wednesday, in preparation for the airfield&#39;s Thanksgiving meal the next day. (Mark Patton/Stars and Stripes) 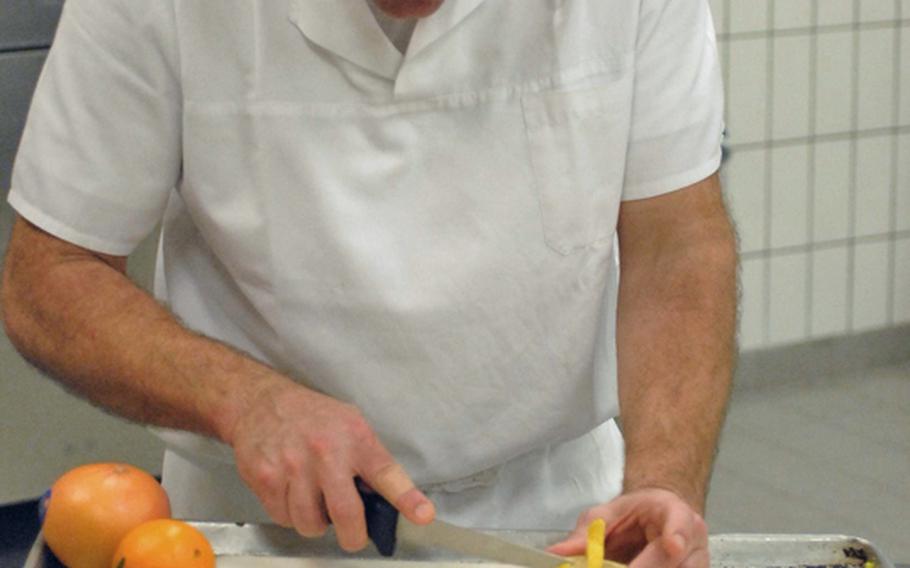 Buy Photo
Thorsten König carves a lemon to add onto decorative fruit garnish for the Thanksgiving Day meal at Wiesbaden Army Airfield. The dining facility says more than 1,500 guests are expected to enjoy their holiday meal there. (Mark Patton/Stars and Stripes) 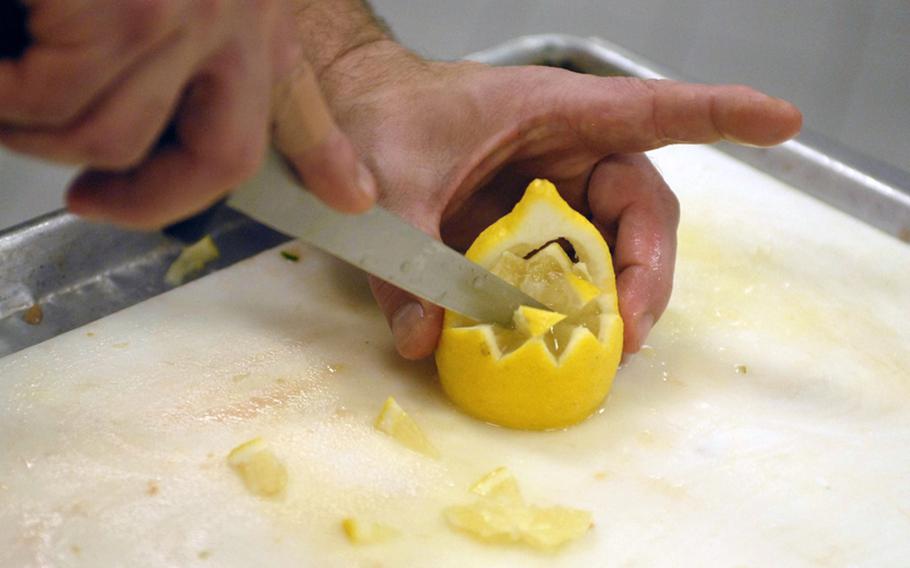 Buy Photo
Thorsten König works on garnish for the Thanksgiving meal at Wiesbaden Army Airfield. On Wednesday, cooks were already busy preparing for the busiest day at the dining facility. (Mark Patton/Stars and Stripes) Buy Photo
These Thanksgiving turkeys wrapped in foil were staying warm in an oven at La Bella Vista Club on Aviano Air Base, Italy, awaiting Wednesday pickups by customers who could serve a full meal cooked on base at their homes. (Kent Harris/Stars and Stripes) Buy Photo
Pages of Thanksgiving recipes and ingredients rest in the kitchen of Erika Cardin, 30, as she begins cooking the holiday meal on Wednesday at her home near Vilseck, Germany. Cardin and her husband, a staff sergeant with the 2nd Stryker Cavalry Regiment, are hosting his squad for the meal. (Steven Beardsley/Stars and Stripes) 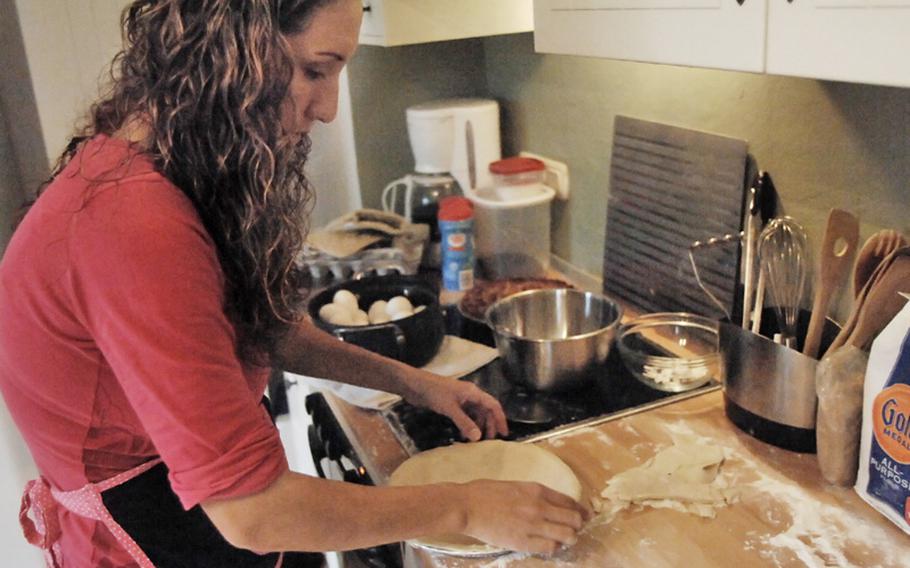 Buy Photo
Erika Cardin, 30, works on an apple pie for Thanksgiving dinner at her home near Vilseck, Germany, on Wednesday. Cardin and her husband, a staff sergeant with the 2nd Stryker Cavalry Regiment, are hosting his squad for the meal. (Steven Beardsley/Stars and Stripes)

KAISERSLAUTERN, Germany &ndash; Two days before Thanksgiving, Sgt. 1st Class Jose E. Fernandez tucked away in his chef&rsquo;s shirt pocket the most important tool he&rsquo;d be using in the kitchen: a meat thermometer.

Foremost on his list of holiday plans was roasting hundreds of pounds of turkey to a savory perfection.

While most U.S. servicemembers and civilians working overseas can look forward to unwinding over Thanksgiving Day, Fernandez, 39, was preparing for his biggest mission of the year.

He was not alone. By Wednesday, dining facilities, clubs and family homes on or near military installations across Europe were hopping with preparations for the big day.

In Grafenw&ouml;hr, stacks of meat lay inside the freezer of the main post dining facility: 450 pounds of turkey, 400 pounds of prime rib, 193 pounds of steamship round &mdash; a hulking side of beef &mdash; and 100 pounds each of ham and shrimp. Facility officials expected 800 diners for Thursday&rsquo;s big meal.

In Stuttgart, home to U.S. European Command headquarters, there were 500 pounds of turkey, 270 pounds of beef, 220 pounds of ham and an 86-pound whole pig on the grill, not to mention barrels of stuffing and 222 pies for good measure.

In Wiesbaden, officials expected from 1,500 to 1,700 guests, compared with the usual few hundred who eat breakfast and lunch at the facility.

&ldquo;A lot of people have always told me that it was considered the Super Bowl of the cooks,&rdquo; said Spc. Daniel Rivera as he prepared food for the Thanksgiving feast in Wiesbaden.

Indeed, preparing the Thanksgiving meal fosters a sense of competition, said Fernandez, assistant manager of the Kleber Kaserne dining facility in Kaiserslautern. His cooks, he said, vie to outdo those at the handful of other Army and Air Force dining halls in Kaiserslautern, to impress commanders and grow a loyal customer base.

&ldquo;We want to hear the customers say we have the best dining facility in the whole Kaiserslautern community,&rdquo; Fernandez said.

To that end, Kleber cooks on Wednesday were busy carving three ice sculptures for display on Thursday, an embellishment to make the day feel special, Fernandez said. Cooking was to begin Wednesday night. In addition to the traditional fare, Kleber was preparing Cornish hens, duck and rabbit.

&ldquo;As everyone else is constantly training or some other mission, this is our mission,&rdquo; Fernandez said of Army cooks. &ldquo;This is the biggest meal of the year.&rdquo;

Scott Shimon, DFAC manager at Patch Barracks in Stuttgart, said the effort, including 10 hours of prep work Wednesday &mdash; building gingerbread houses in addition to cooking &mdash; and another long day Thursday starting at the crack of dawn was worth it.

&ldquo;You get a lot of praise. People are very happy to get a good meal.&rdquo;

At Aviano Air Base in northern Italy, people had the option Thursday of eating at the La Bella Vista Club &ndash; a combined enlisted and officer club &ndash; or taking a ready-made meal home. A crew of about a dozen at the club prepared 60 take-home meals designed to serve from eight to 10 people each, according to Mary Ann Lauro, chef and kitchen manager.

The comprehensive meals, including sides and desserts, had to be ordered three days in advance, and started at $70 for club members, with extras available.

The definition of cooking for a crowd was relative, however.

Erika Cardin of Vilseck decided to prepare a home-cooked meal for 15 members of her husband&rsquo;s squadron, part of the 2nd Stryker Cavalry Regiment.

With only a single, small oven in her German kitchen, Cardin, 30, borrowed pots, pans and food warmers and mapped out a strict cooking schedule that kicked off Tuesday. On the menu: Herbed turkey, sugar ham, sweet potatoes and four kinds of pies, among the offerings.

&ldquo;I want everything to turn out OK,&rdquo; Cardin said, acknowledging she was nervous. &ldquo;I want them to be able to enjoy a home-cooked meal for once.&rdquo;

She allowed herself one convenience, using paper plates and cups for dishware.

&ldquo;Because I&rsquo;m not doing 10 loads of dishes,&rdquo; she laughed.