Thanksgiving dinner at Three Kingdoms a tradition for Americans and Koreans 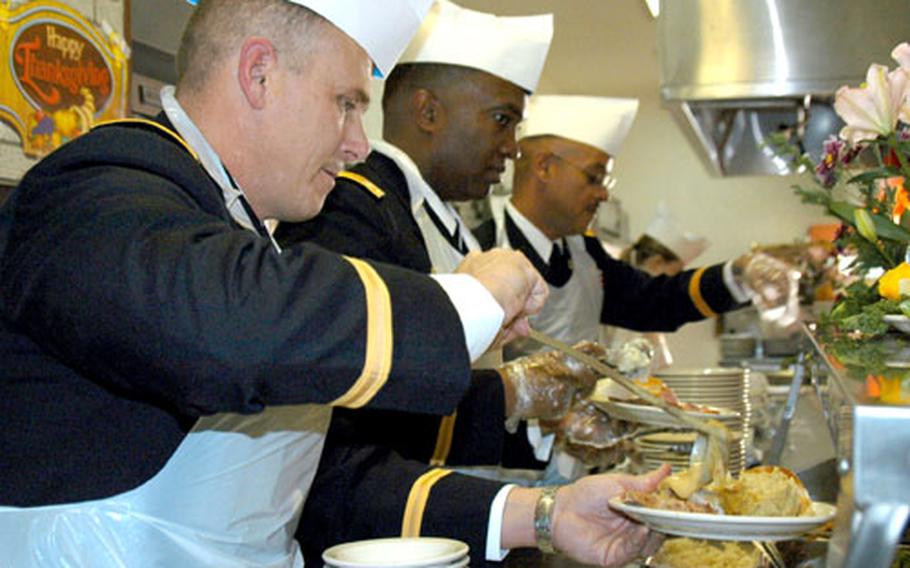 Lt. Col. Steve Bunch, with the 8th Army&#39;s Headquarters and Headquarters Company, ladles gravy onto a Thanksgiving dinner at the Three Kingdoms Inn on Yongsan Garrison. It&#39;s an Army tradition for officers and senior NCOs to serve a Thanksgiving meal to their troops. (Teri Weaver / S&S)

Lt. Col. Steve Bunch, with the 8th Army&#39;s Headquarters and Headquarters Company, ladles gravy onto a Thanksgiving dinner at the Three Kingdoms Inn on Yongsan Garrison. It&#39;s an Army tradition for officers and senior NCOs to serve a Thanksgiving meal to their troops. (Teri Weaver / S&S) 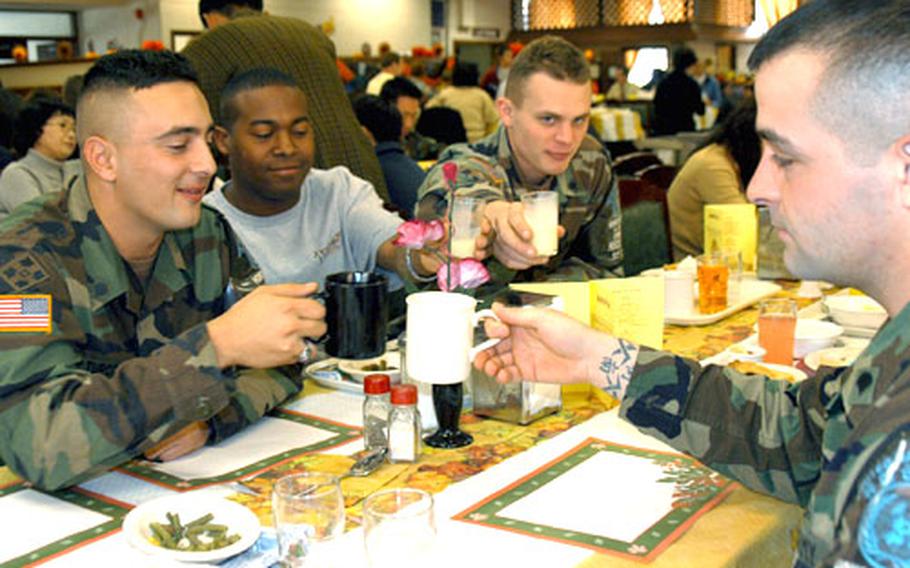 A Thanksgiving toast with coffee and egg nog at the Three Kingdoms Inn on Yongsan Garrison. From left, clockwise, are: Spc. Anthony Turco, 24, of Houston; Spc. Marcellus Fields, 26, of Portsmouth, Va.; Spc. Jon MacAbam, 21, of Harrisburg, Pa.; and Spc. James Baum, 26, of Staten Island. All are members of the United Nations Command Honor Guard, and all worked during the holiday. (Teri Weaver / S&S) Thanksgiving dinner at the Three Kingdoms Inn on Yongsan Garrison attracted many Korean guests at lunchtime. The meal — $5.90 for as much turkey, brisket, ham, and chicken you could carry — included some Korean traditional dishes, such as bulgogi and kimchi. (Teri Weaver / S&S) Maya Florin-Amodeo, 7, gets some help with her reflective vest from her mom, Nannette, before Thursday&#39;s Turkey Trot run at the Dragon Hill Lodge on Yongsan Garrison. (Teri Weaver / S&S) YONGSAN GARRISON, South Korea &#8212; Air Force Master Sgt. Randy Sortino plans to retire next year, and he wanted to take part in one more military tradition before he leaves.

So Thursday he brought his wife, Marsha, and their two sons &#8212; Elijah, 9, and Ezekiel, 6 &#8212; to Yongsan&#8217;s Three Kingdoms Inn dining facility to enjoy Thanksgiving dinner together.

&#8220;I wanted to get out and have the experience,&#8221; he said as his family ate dessert with the Greers, an Army family that has dined at the Three Kingdoms for the past two turkey holidays.

In the Seoul area, five dining facilities were expecting to feed more than 1,500 people, according to Larry Graham, the Area II food program manager. At Three Kingdoms, more than 500 diners were expected for the noon meal, which took place after a morning turkey trot that saw 80 people join in at the Dragon Hill Lodge.

Greer came with her husband, Sgt. First Class Howard Greer, and their children, Kayla, 15; Kevin, 10; and Joshua, 18 months. Joshua&#8217;s favorite seemed to be the soft chocolate-and-vanilla ice cream. Kevin, who had already cleaned his plate, kept busy serving as the family&#8217;s waiter.

Despite his full stomach, he couldn&#8217;t decide which was his favorite Thanksgiving treat. His least favorite was easier to remember.

At Three Kingdoms, most of the diners were Korean workers enjoying the huge feast, so the meal included a couple of local staples: kimchi and a stewed beef called bulgogi.

Some diners, however, were just taking a break from work. Spc. Anthony Turco, of Houston, celebrated his 24th birthday with Thanksgiving dinner at the dining hall. Turco and his friends are members of the United Nations Command Honor Guard; a unit that works every day to ensure safety and ceremony around some of U.S. Forces Korea&#8217;s headquarter buildings.

Last year, Turco spent the day with family at home. He said he didn&#8217;t mind being gone this year; two years ago he spent the holiday in Iraq.