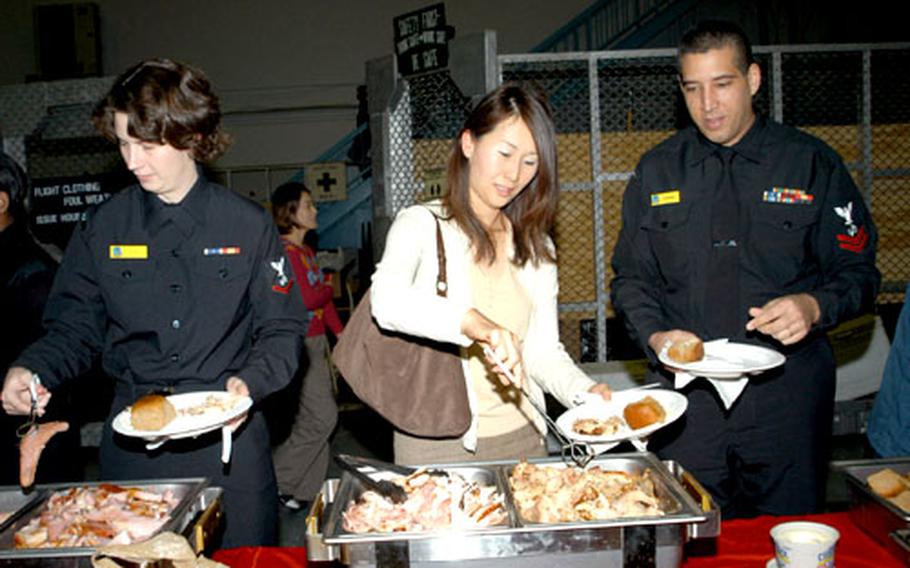 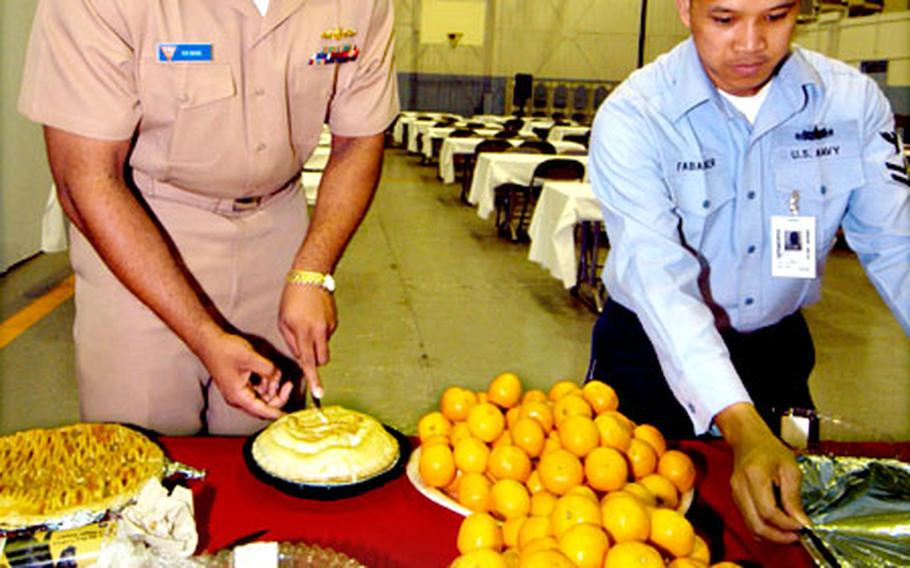 For American servicemembers in the Pacific this week, that means there&#8217;s lots to talk about.

Thanksgiving, that quintessential American holiday, is Thursday &#8212; and the U.S. military isn&#8217;t about to let a little thing like being half a globe away stifle the traditional celebrations.

For a start, servicemembers should know Americans are thankful for their service, Pacific Air Forces Commander Gen. Bill Begert said in a written statement released Monday.

&#8220;As always, the demands of our profession require many of you to spend this Thanksgiving Day holiday far away from home,&#8221; Begert said. &#8220;Know that your sacrifice is recognized and appreciated by your peers, your leaders and fellow Americans.&#8221;

Many servicemembers will find those thanks being expressed very traditionally: with mega-calories.

Most base clubs and mess halls are offering Thanksgiving dinner with all the fixings &#8212; turkey, mashed potatoes, stuffing, cranberry sauce, etc.

And at some bases, officers and their wives will be the ones dishing up the dressing.

In Tokyo, some U.S. Embassy families are serving dinner to some from Yokosuka Naval Base, base spokesman Mike Chase said Monday. &#8220;They have opened their homes to sailors&#8221; for a traditional meal, he said.

Back on base, those standing duty Thursday at Okinawa&#8217;s camps Hansen and Schwab will receive a free meal courtesy of Marine Corps Community Clubs, while Marines from the Okinawa&#8217;s Jungle Warfare Training Center and Ie Shima will be treated to a free barbecue.

But many servicemembers this Thanksgiving will have opportunities to do more than just collect carbohydrates.

The barbecues at Jungle Warfare Training Center and Ie Shima, for instance, also are to feature games and giveaways, as are Thanksgiving Extravaganza activities at camps Hansen and Schwab.

Vendors are helping servicemembers keep in touch with families this holiday. Konnect Cafes on Okinawa are offering up to 30 minutes of free connect time and Futenma USO and AT&T are giving servicemembers a free 15-minute call home to the States.

Several bases have slated recreational activities to help servicemembers make sure that third helping of stuffing doesn&#8217;t stick around &#8212; on their hips.

Camp Kinser will host a recreational basketball tournament, and Marines at camps Courtney, Hansen and Schwab can pass the afternoon bowling for prizes &#8212; without having to pay for time on the alley.

Too stuffed to sprint? That&#8217;s no excuse at Negishi, where Morale, Welfare and Recreation has a 5K run slated for 8:45 a.m. Saturday. The Gobblers 5K Run/Walk, open at no charge to all servicemembers, begins in front of Negishi All-Hands Club, said Tommy Daniels, MWR director. Runners may register this week by calling DSN 242-4120.

But the winner might want to hold off feeling too smug about all those divested calories: The prize is a turkey for Christmas.