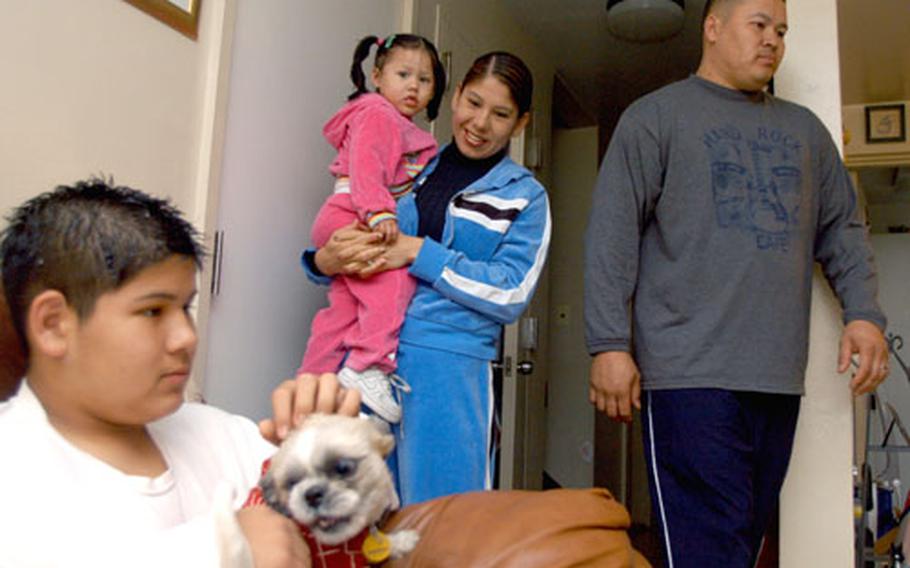 The Wood family waits for a Thanksgiving call from President Bush on Thursday. From left are Steven Christopher, Christine with 2-year old Rayna, and Steven. (Allison Batdorff / S&S)

Though President Bush was scheduled to call her in a few hours, the 34-year-old Navy corpsman wasn&#8217;t nervous, she said.

Bush&#8217;s holiday phone call originally was to be a surprise, but the White House called Wood&#8217;s Naval Air Facility Atsugi home all week to make sure the line was working, she said. The last call informed her that Bush was rescheduling, leaving her more time to hammer out the logistics with her family.

Speakerphone was nixed, but Wood told her husband, Steven, also a Navy petty officer first class, to ready the video camera for some reaction shots while she chats with the commander in chief.

Wood said she was &#8220;pretty excited&#8221; to speak to the president and that it made her feel pretty important the &#8220;president took time out of his busy schedule to wish me a happy Thanksgiving.&#8221;

Bush telephones two members from each branch of the armed forces on Thanksgiving every year. Wood was the Navy pick in the Pacific; the other Navy representative was in Europe.

Wood returned from Camp Phoenix outside Kabul earlier this month after spending about six months working in a troop medical clinic. The majority of patients were Afghan civilians &#8212; many of them children suffering from burns from playing near boiling cooking water, she said. That hit her hard, she said, as she&#8217;s also mother to a 2-year-old girl, Rayna.

Wood also treated a gunshot wound and children who had accidentally detonated an IED, but most of her time was spent supervising a fleet of ambulances, she said.

Wood said she wasn&#8217;t sure why she was picked for the call, as many of her colleagues are still in Afghanistan on extended tours.

Her friends are happy for her and have lots of messages for the president &#8212; nothing too political, Wood said.

But she didn&#8217;t have time to relay the message. When the phone call came, it lasted about three minutes, Wood said.

So what did the president say?

But mostly, they talked about Thanksgiving &#8212; the president asked her how she celebrated the holiday and wished her a happy one, she said.

Steven videotaped the conversation and said Wood was &#8220;smiling and happy the whole time.&#8221;

The Woods had a lot to be thankful for this year, Steven said.