Thanksgiving Army-style at remote base in Afghanistan 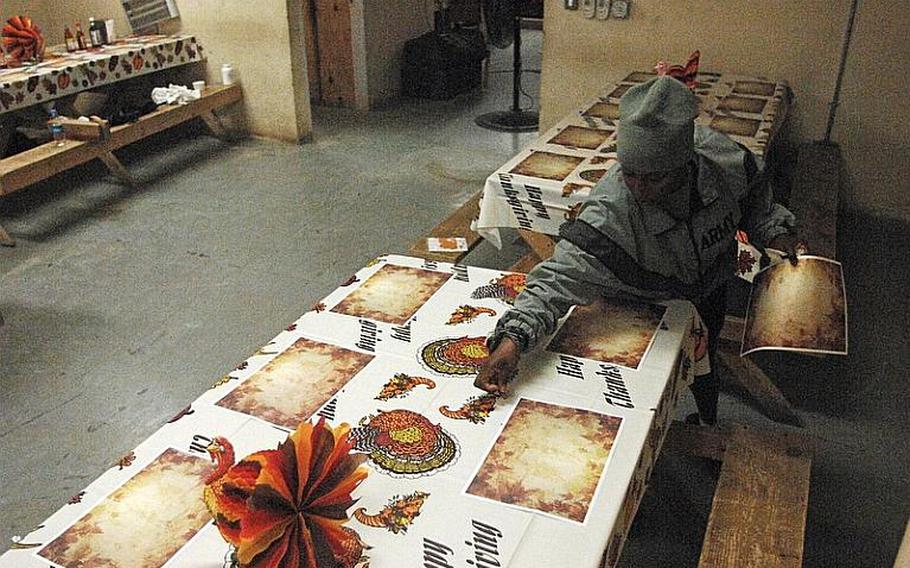 Buy Photo
Spc. Shannel Cox, of Brooklyn, N.Y., sets out Thanksgiving Day decorations in the dining facility at Combat Outpost Bawri Tana in Khost province, Afghanistan, Nov. 21, 2012, . For the holiday, soldiers at the outpost were to have turkey, ham and the traditional sides for both lunch and dinner. (Steve Beardsley/Stars and Stripes)

Buy Photo
Spc. Shannel Cox, of Brooklyn, N.Y., sets out Thanksgiving Day decorations in the dining facility at Combat Outpost Bawri Tana in Khost province, Afghanistan, Nov. 21, 2012, . For the holiday, soldiers at the outpost were to have turkey, ham and the traditional sides for both lunch and dinner. (Steve Beardsley/Stars and Stripes) 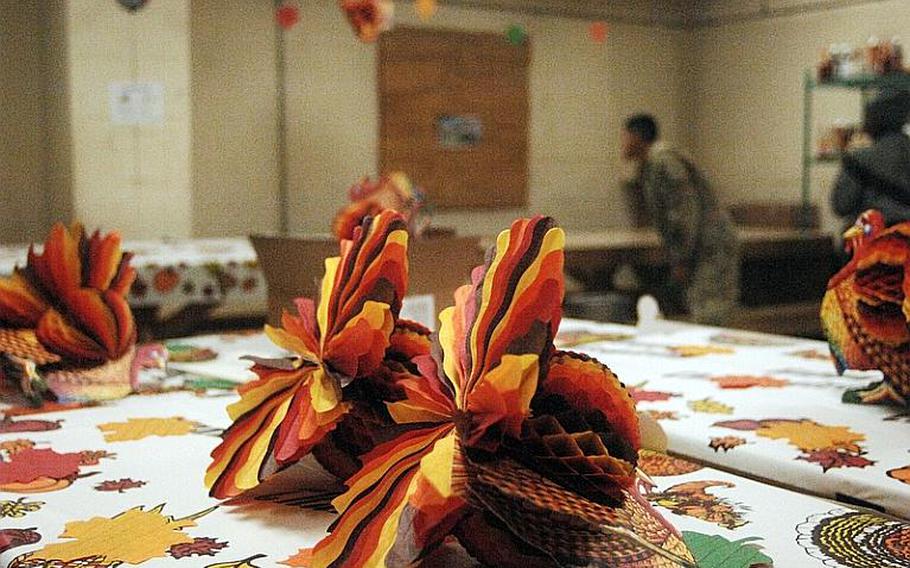 Buy Photo
Thanksgiving Day decorations adorn the tables at the dining facility at Combat Outpost Bawri Tana in Khost province, Afghanistan. Soldiers at the outpost were having turkey, ham and the traditional sides for both lunch and dinner on Nov. 22, 2012. (Steve Beardsley/Stars and Stripes)

Barthelemey is head cook for an Army infantry company at this outpost in remote east Afghanistan near the Pakistan border, a transit region for militants entering the country, and an unlikely setting for a traditional American Thanksgiving.

Yet that&rsquo;s how Barthelemey is spending the day, cooking a meal that rivals what Company C, 3rd Battalion, 187th Infantry Regiment, is missing during deployment.

&ldquo;Just want everybody to be happy,&rdquo; she said. &ldquo;You can&rsquo;t be with your family, but you can be with me.&rdquo;

She&rsquo;s offering a full menu, from fried and roasted turkey to ham and a 75-pound beef &ldquo;steamship round&rdquo; roast. She&rsquo;ll have traditional sides such as stuffing, green bean casserole and cranberry sauce, and dessert that includes pie, cookies and ice cream.

&ldquo;I&rsquo;ll have to cut a split on the back of my PT shorts,&rdquo; Sgt. 1st Class Frederick Robinson, of Huntington, W.Va., quipped.

Entering the third month of a nine-month deployment, soldiers with the 3-187 and its parent unit, the 3rd Brigade, 101st Airborne Division, have spent their days patrolling villages and training local security forces, and their evenings on guard duty or running nighttime operations.

Other soldiers at Bowri Tana, like Robinson, are part of an adviser team for Afghan security forces.

Although it&rsquo;s been a relatively quiet deployment so far at the outpost in Khost province, violence occasionally rears its head. Bowri Tana has taken mortar fire a handful of times, and it defeated a dismounted attack several weeks ago.

Barthelemey, of New Orleans, an Army cook for five years, faces a few minor challenges in the kitchen. Fuel sometimes runs out, and electricity isn&rsquo;t guaranteed. The oven is broken, so heat comes from a fuel burner beneath it. That makes temperature difficult to gauge, but not impossible, said Spc. Lizeth Wakasa, who works with Barthelemey in the kitchen.

&ldquo;Sometimes you have to improvise, like I did with the alfredo last night &hellip; you have to work with what you have,&rdquo; said Wakasa, of Queens, N.Y.

Big meals will be prepared at other outposts in the brigade&rsquo;s footprint in east Afghanistan as well, according to a unit spokeswoman, Maj. Stacy Hopwood. Commands will aim to keep duties light, she said.

&ldquo;We&rsquo;ll just break bread and enjoy ourselves,&rdquo; Hopwood said. &ldquo;One thing we try to do is stand down for the day.&rdquo;

At Forward Operating Base Salerno, a larger base and supply point for the smaller outposts, Fox Sports will broadcast a live &ldquo;shout-out&rdquo; by members of the brigade, Hopwood said, which will air during the annual Dallas Cowboys game, this year against the Washington Redskins. Soldiers at FOB Salerno can also participate in an early morning 5K Turkey Trot, she said.

Visits by brigade officials are another possibility at the outposts, Hopwood said.

&ldquo;I miss my family,&rdquo; said Spc. Samuel Prentice, of Santa Rosa, Calif. &ldquo;We&rsquo;d always have the whole family over at my house. My dad cooked the turkey. Cheesecakes, too.&rdquo;

Barthelemy hopes her food can fill part of what&rsquo;s missing from home.