Thanks to new transmitters, AFN signal better at Baumholder 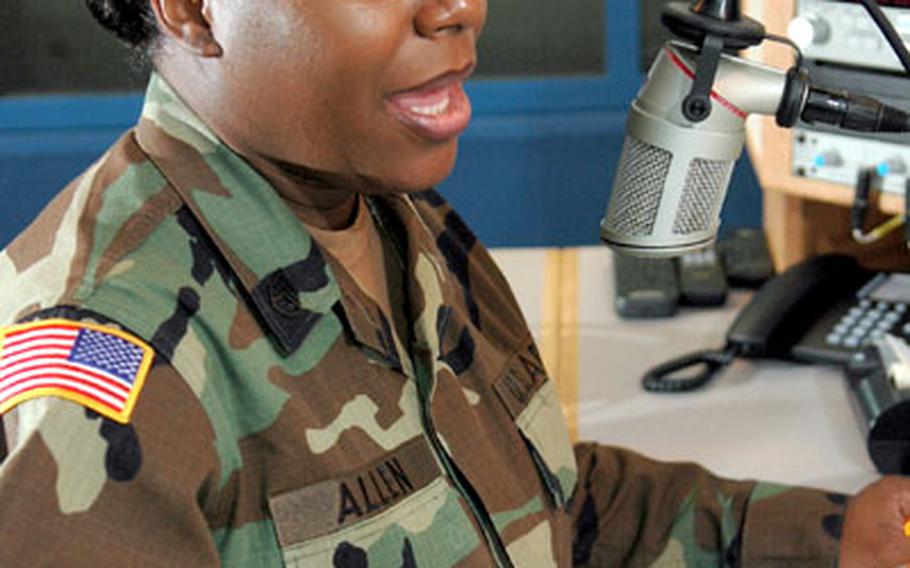 BAUMHOLDER, Germany &#8212; About a year ago, Brig. Gen. Michael Tucker was driving around the Baumholder area, trying with little success to tune into his favorite talk-radio and sports programming.

What Tucker found as he looked into the issue is that H.D. Smith Barracks, where he&#8217;s 1st Armored Division&#8217;s assistant division commander-support, is on the very edge of two AFN signals; one from Wiesbaden at 98.7 FM, and another from Ramstein, at 100.2 FM. Why couldn&#8217;t the American Forces Network, he mused, just put up a transmitter in Baumholder?

Radio may be the oldest and simplest broadcast technology, short of shouting out of a window. But 100 years after the first radio show, it turns out that no one person at AFN has all the answers &#8212; or all the authority.

What AFN technicians ended up doing was adding two low-power transmitters in the Baumholder area, according to Lon Blair, operations director and acting station for AFN Hessen in Wiesbaden. A 10-watt transmitter at H.D. Smith Barracks broadcasts on the new 106.1 FM frequency. A 200-watt transmitter in Birkenfeld, about 15 miles northeast of Baumholder, brings the 98.7 FM signal to 1st AD housing units in Birkenfeld and Idar-Oberstein.

Both frequencies carry programming from AFN Hessen, which originates from 1st AD headquarters in Wiesbaden, Clark said. But even the signal boosts may not bring crystal- clear reception.

Ironically, the best way to listen to AFN radio may be on television: &#8220;We do want people to recognize there&#8217;s more value to decoders than only TV,&#8221; Clark said.

On AFN television channel 21 through channel 33, AFN transmits various feeds, feeds from which different radio operations around Europe pull their content, he said. So, if a listener wants all three hours of &#8220;The Rush Limbaugh Show&#8221; or &#8220;The Tom Joyner Show,&#8221; instead of just one hour on AFN AM talk radio, they&#8217;re available via the decoder.

Aside from music and talk radio, Tucker said, he wants access to AFN for more Baumholder-centric command information and weather updates so he can get news quickly to families of deployed 2nd Brigade soldiers. And with local feeds and a stronger signal, he&#8217;s getting it, though it took a year, he said.

Now, AFN Hessen personnel are seeking feedback on the quality of the new signals, which could be amplified if they are not clear. Listeners are asked to call Blair at DSN 337-6852 or commercial (0) 611-705-9123.

How many people listen to the radio in Baumholder? Potentially a lot, since there are about 10,000 Americans among military personnel and families in the area when the 2nd Brigade units and Division Artillery aren&#8217;t deployed.

BAUMHOLDER, Germany &#8212; For a radio &#8220;network&#8221; with a potential audience of fewer than 250,000 Americans, American Forces Network radio in Europe offers a huge variety of operations that are basically locally run.

In addition to AFN Europe, operated by the Army, there&#8217;s also:

AFN Spangdahlem in western Germany, &#8220;owned and operated&#8221; by the Air Force.AFN Vicenza, serving a military community in northern Italy.AFN Rota in southwest Spain, operated by the Navy.AFN Incirlik in south-central Turkey, operated by the Air Force.That&#8217;s just a partial list that includes communities from Sigonella, Italy, to Brussels, Belgium, as well as operations in Iraq and Afghanistan.

What audiences hear varies based on listener surveys and the average age of military members in that area.

All stations draw from the same advertising-free content, originating with Armed Forces Radio and Television Service in Riverside, Calif., and transmitted via satellite to Europe. But what listeners hear in their communities can vary dramatically.

In large markets such as Kaiserslautern, for example, almost all FM programming is local, Clark said. Operations with smaller staffs may use syndicated shows, such as the &#8220;Jonathan and Mary Morning Show&#8221; from ABC Radio.