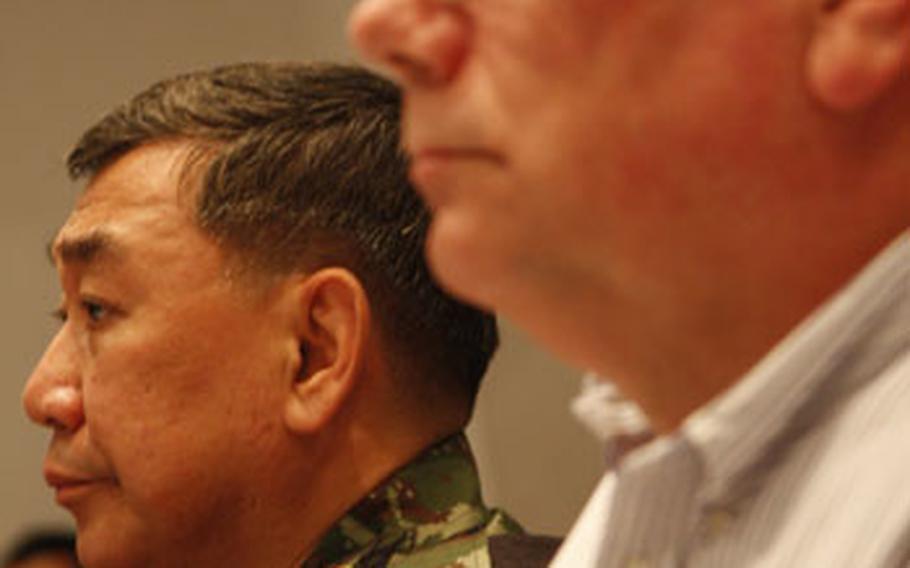 CHIANG MAI, Thailand &#8212; Training with the U.S. military is crucial to the ability of Southeast Asia&#8217;s armed forces to work together in disasters or crises, the chief of the Thai military&#8217;s joint staff said Tuesday.

With field exercises under way across the country, the general said he was pleased how this year&#8217;s "realistic" exercise will help the region react to future threat scenarios with a multinational, coalition-style response.

"What we are getting out of Cobra Gold is extremely valuable for various countries in this region, whether it be a matter of maintaining peace, internal security, humanitarian assistance, and training on new technologies and military training," he said.

"The great benefit that the Royal Armed Forces get out of Cobra Gold is the preparation for operations, especially peacekeeping operations which they can then apply in internal security efforts."

Amid a blend of field uniforms from five Southeast Asian nations, Kanchanawat met participants of the staff-level mock United Nations crisis scenario being played out in the fictional country of "Arcadia."

Next year, the Arcadia simulation will move out to the field, where large operational exercises will play out in real time.

This year&#8217;s field exercises are separate from the Arcadia scenario.

In the simulation, resembling internal conflicts of the Balkans in the 1990s, a displaced population has been terrorized by ethnic cleansing. After the U.N. force is pushed back, a regional coalition called UNPACFOR must regroup and regain peace and security.

The scenario includes extensive maps of a fictional region of the Pacific depicting the country, its towns and military installations, as well as neighboring countries of "Kuhistan" and "Free Mojave."

Even military lawyers must go through simulated elements, such as working on status of forces agreements, United Nations resolutions and ensuring human rights in detainee camps.

"It is good preparation; it is good information," Kanchanawat said.

Thailand&#8217;s north and west share a long border with Myanmar, led by a military dictatorship that has received worldwide scorn for human rights abuses.

"They keep an eye on what happens along the western half of Thailand," Kanchanawat said when asked if U.S. forces had detected any border movement by Myanmar troops.

But U.S. Army Col. John Hansen, director of USARPAC&#8217;s training and exercise division, reassured the general. "We&#8217;ve detected no issues at all there," he said.