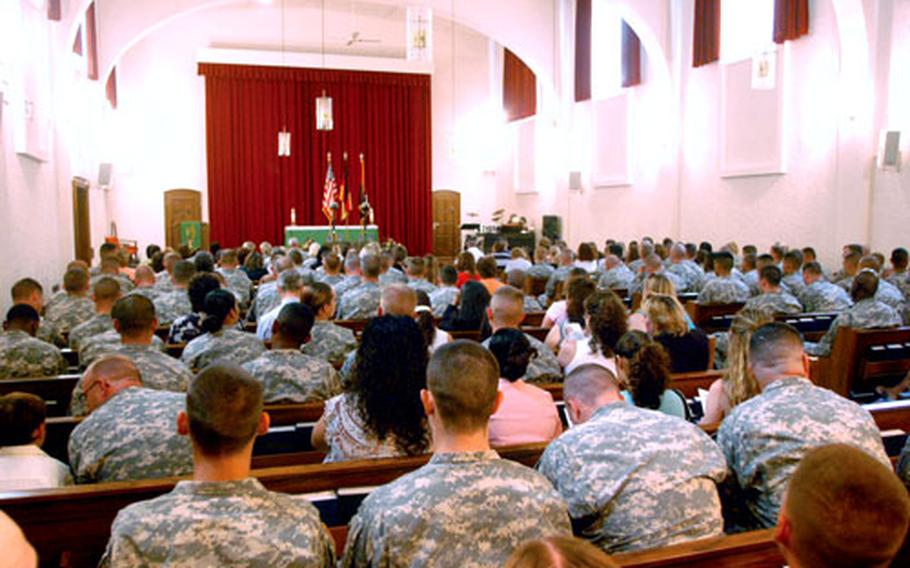 Mourners gather for a memorial service on July 19 at Ledward Chapel in Schweinfurt, Germany. A year into the deployment of Schweinfurt’s 2nd Brigade, more than 50 of tis soldiers have died in Iraq. (Charlie Coon / S&S)

Taking care of the 4,000 deployed troops and 3,000 family members in Schweinfurt, Germany, wasn&#8217;t easy, but 2nd Brigade Combat Team, 1st Infantry Division&#8217;s Task Force Guardian was up to the challenge.

That vision materialized when Guardian&#8217;s small group of soldiers partnered with the local schools and German military units. They coached baseball and soccer. They became Boy Scout leaders. They held countless training, appreciation and memorial seminars, dinners and ceremonies. They visited every one of the unit&#8217;s wounded.

They managed to fill the roles of 50 times their number.

&#8220;We made sure there were enough volunteers so the (post schools) never had to cancel a field trip,&#8221; Whittle said.

&#8220;They have been recognized across our Army &#8230; as a model for how things should be done. They (were) hard at work at home while our soldiers (were) hard at work in the combat zone,&#8221; Burton said of Guardian&#8217;s staff, which also managed to move more than 500 new soldiers into Iraq to join the brigade&#8217;s ranks during the deployment.

Because of its provisional status, when the unit formed in January 2006, Guardian didn&#8217;t have an insignia: Whittle and his staff made their own.

Whittle&#8217;s wife even had a unit flag sewn, one which he and 1st Sgt. David Morgan, Guardian&#8217;s senior enlisted man, were able to proudly case Jan. 8, when the unit was deactivated.

Whittle said the task force&#8217;s main purpose was &#8220;(to) allow the Dagger Brigade Combat Team to focus on combat operations by providing quality support to soldiers and family members.&#8221;

When Burton returned from Iraq, he had this to say: &#8220;Task Force Guardian set the brigade up for success. They cared for the family members, cared for our fallen and wounded and allowed us to focus on the fight.&#8221;