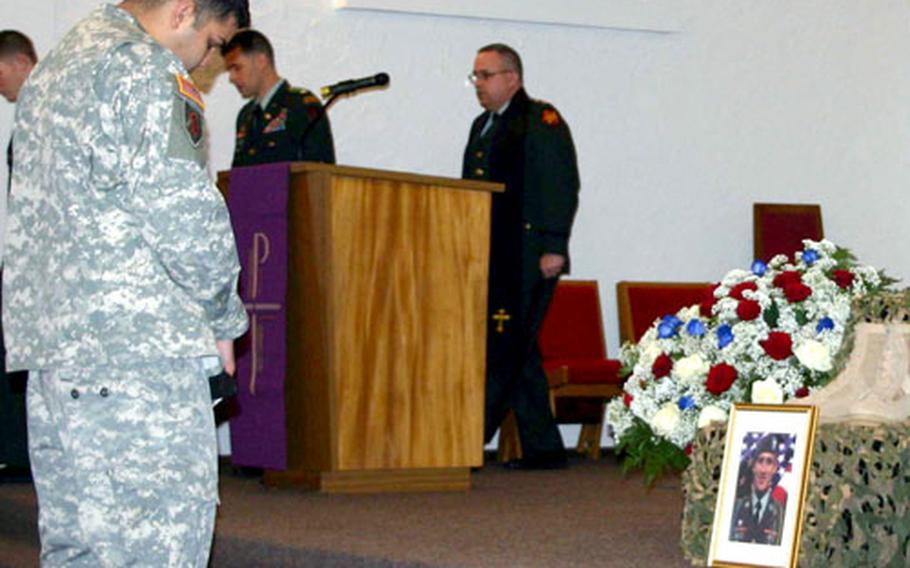 A soldier bows his head during the memorial service Friday in Schweinfurt, Germany, for Pfc. Paul Balint Jr., who was killed in action Dec. 15 in Ramadi, Iraq. (Sandra Wilson / U.S. Army)

There are three things Pfc. Paul Balint Jr. is likely to be remembered for: his devotion to his family, his ability to make people laugh and his barbecue.

He&#8217;ll also be remembered as an outstanding soldier whose life ended too early.

Balint, 22, of Willow Park, Texas, was killed Dec. 15 in Ramadi, Iraq, when his unit came under fire during combat operations. He was assigned to Company B, 1st Battalion, 26th Infantry Regiment, 2nd Brigade Combat Team, 1st Infantry Division, based in Schweinfurt, Germany.

The Schweinfurt community held a memorial ceremony Friday to remember Balint. A similar ceremony also was held Friday in Iraq.

Before deploying to Iraq in August, Balint and the rest of his team would gather for barbecues at Sgt. Paul Able&#8217;s place. Able was the team leader.

&#8220;He would tell me about barbecues that his mom&#8217;s side of the family would throw,&#8221; Able said during the memorial service in Iraq, according to copies of the remarks provided to Stars and Stripes.

The barbecues were one of the things that helped remind the young soldier of home, which he often talked about with his buddies.

Another of his squad mates, Pfc. Justin Armenta, remembered meeting Balint for the first time during a training rotation in Grafenw&#246;hr and Hohenfels, Germany.

Able said Balint joined the Army to make a better life for himself, and he had. One of his goals was to be a team leader, like Able.