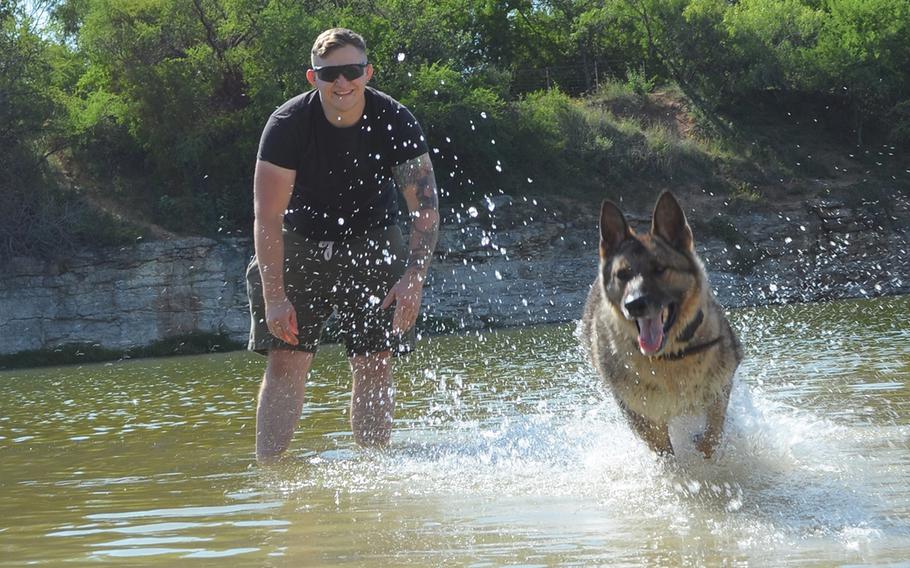 Buy Photo
Army Sgt. Jake Ferkin adopted his former military working dog Iskra in May. The 10-year-old German shepherd is adapting to retirement in San Antonio, Texas and loves to play in the water. (Rose L. Thayer/Stars and Stripes)

Buy Photo
Army Sgt. Jake Ferkin adopted his former military working dog Iskra in May. The 10-year-old German shepherd is adapting to retirement in San Antonio, Texas and loves to play in the water. (Rose L. Thayer/Stars and Stripes) 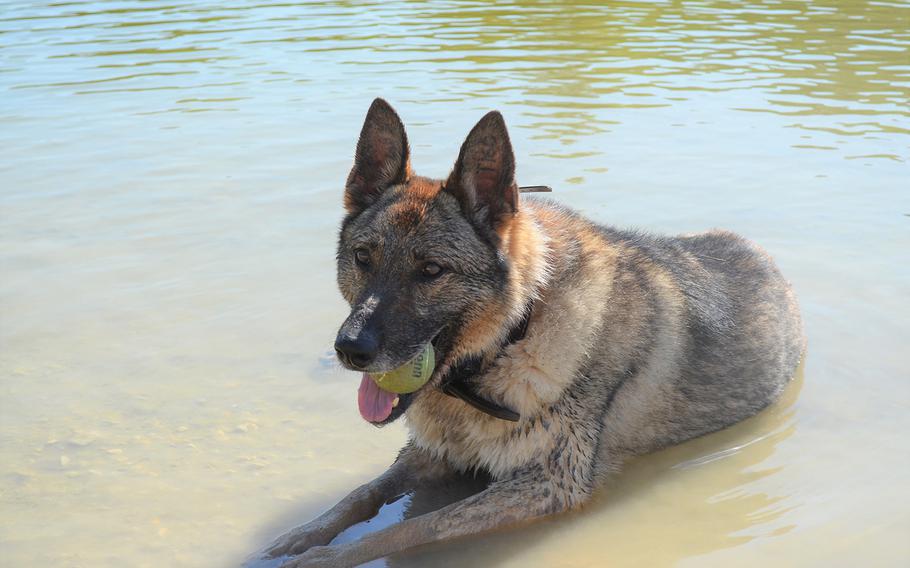 Buy Photo
Though Iskra, a 10-year-old German shepherd, has had trouble adjusting to retirement after a lifetime of detecting explosives for the Army, she does enjoy playing in the water, said Army Sgt. Jake Ferkin, who adopted his former partner last month with the help of Mission K9 Rescue. (Rose L. Thayer/Stars and Stripes) 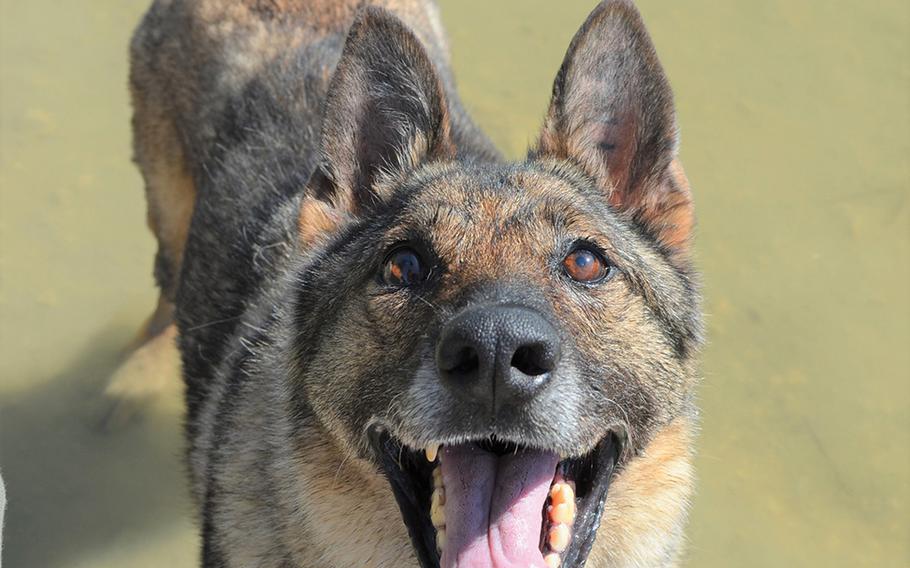 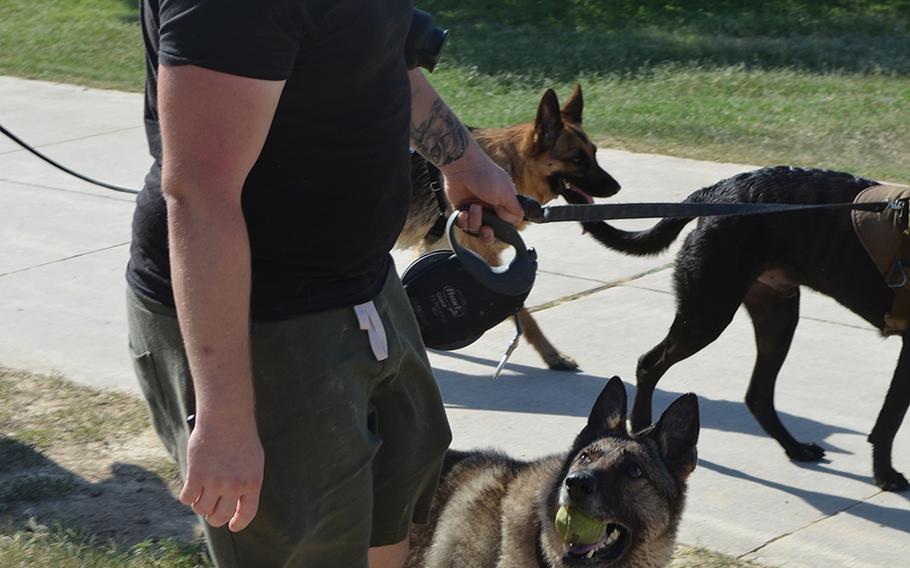 SAN ANTONIO, Texas — Work for Iskra, a 10-year-old German shepherd, once included searching vehicles at a checkpoint in Baghdad or patrolling Trump Tower in New York City for explosives as part of the team keeping the then-president-elect safe.

These days, the retired military working dog is more focused on searching out scents along park trails in San Antonio and keeping close watch on her favorite human, Jake Ferkin.

“She’s kind of obsessed with me,” the 23-year-old Army sergeant said with a laugh.

He found himself attached to Iskra after serving as her handler at Fort Myer, Va., for more than two years beginning in February 2016. Together, Ferkin and Iskra, a dog with specialized training to identify explosives, served on various stateside security missions, including protecting President Donald Trump as he prepared to take office and securing Arlington National Cemetery for a wreath-laying ceremony that was part of inauguration events. The pair also served overseas on missions in Israel and a 10-month stint in Iraq.

“She’s really friendly to people and didn’t have too much trouble with travel,” Ferkin said.

Once they returned from Iraq in 2018, Ferkin got orders to Joint Base San Antonio, where he now works training new dog recruits with the 341st Training Squadron. When he left Iskra, he knew she was beginning to show signs of age and pain in her hips and knees, and he began efforts to get her retired so he could adopt her.

He turned to Mission K9 Rescue, a nonprofit that works with the Defense Department, military contractors and police departments to rehabilitate working dogs to retire into civilian homes — quite often with former handlers.

Since its founding in 2013, the group has rescued more than 990 dogs, with about 640 returning to former handlers, said Bob Bryant, co-founder and chief technology officer for Mission K9 Rescue.

Many of the retiring dogs go through a rehabilitation process at the nonprofit’s ranch near Houston, where they learn to decompress and function in a home-like environment. Many have quirks that come from years of training and working — a fear of thunder, because of exposure to gunfire, or a bias against other animals, people or clothing.

The Houston-area facility, which welcomes volunteers, can hold up to 40 dogs at a time. Mission K9 Rescue would like to expand to hold 60 dogs and install a place for the dogs to swim, Bryant said.

The nonprofit also helps fund medical treatment, and prospective owners must show they are capable of meeting the dog’s medical needs before an adoption is approved. Age is also a factor for a dog’s health, with the average age of dogs that come through the rescue at 9.5 years old, Bryant said.

“We are extremely stringent in our adoption requirements,” he said. “We have over 1,500 applications sitting right now. We got in over 100 last weekend. A lot of people want to adopt these dogs, but not all are able to invest the time, money or resources required to maintain them.”

There is a $300 fee to adopt from the group, but Bryant said they invest far more into the dogs than they ask for in return.

Iskra officially retired from service in early May and returned to Ferkin on May 25. In a video of their reunion, Iskra spends about 45 seconds checking out the cameras and people documenting the event before she recognizes it is Ferkin holding her leash. She then begins to jump at him and turn circles at his feet.

“Yeah, there was a lot going on, so it took a minute,” Ferkin said. “I’m really grateful for [Mission K9 Rescue], because I would not have been able to go get her myself.”

Because of travel restrictions in place for the coronavirus pandemic, Ferkin was not allowed to go to Virginia to collect Iskra. Instead, volunteers from Mission K9 Rescue drove the dog to Texas.

Just a couple of weeks into their reunion, Iskra is adjusting to retirement and her new home with two dog siblings and Ferkin’s wife, Felicia. She still has the drive to work or play, but even after a few rounds of fetch, Jake Ferkin said the dog begins to show pain in her hips.

“What’s she’s having trouble adapting to is that she wants to continuously work,” he said. “Her body just can’t really handle it.”

Iskra will occasionally wander out into the yard on her own or venture farther along the trail at the park, but Jake Ferkin said it’s not long before she returns to him.

“She just likes to be with me,” he said.

For more information on Mission K9 Rescue, go to https://missionk9rescue.org/.