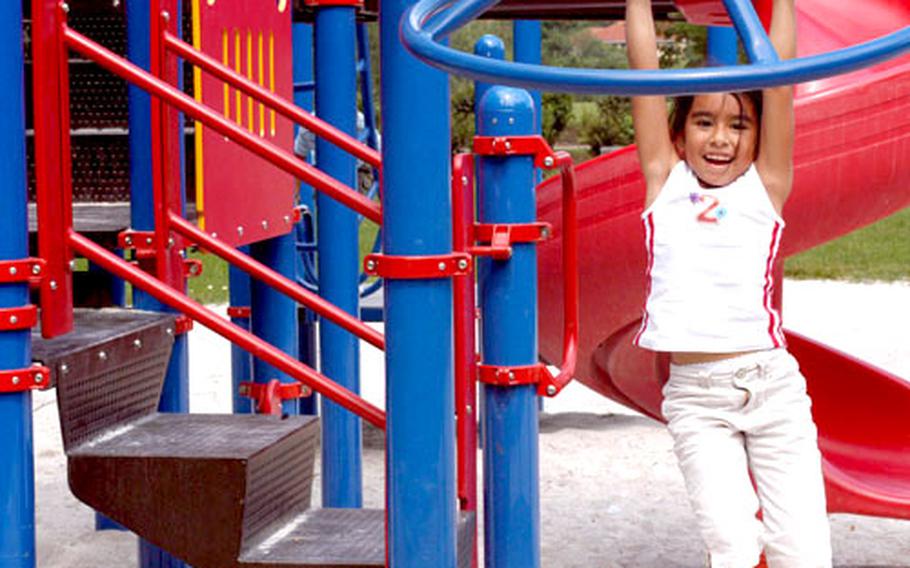 Six-year-old McKenna Luna takes advantage of some of the remaining playground equipment Tuesday in Vilseck, Germany. The base was one of three in the 100th Area Support Group, along with Hohenfels and Grafenwöhr, to recently find that some of its school and community playground equipment was contaminated with lead-based paint. (Ben Murray / S&S)

Three more samples of paint collected from Department of Defense Dependents Schools in Vilseck and Hohenfels tested positive for the paint, along with 10 more samples of on-post community playgrounds at the same two bases, said John Svalina, an industrial hygienist for the U.S. Army Center for Health Promotion and Preventive Medicine Europe.

That brings the total number of positive lead samples to 23 in the Grafenw&#246;hr-Vilseck-Hohenfels area after three rounds of testing that started in late May. The results have prompted local officials to expand their warning about avoiding playground equipment to include pieces with painted metal.

The remaining cases all were in Vilseck, at the Empire Court, Pecos Court, Tennessee Court and Golden Gate playgrounds, he said. One DODDS piece of equipment at Vilseck elementary school tested at the acceptable limit of .01 percent lead and will remain on the grounds, he said.

All the affected equipment has been marked with signs and likely will be removed by Thursday evening by the 100th ASG Directorate of Public Works and the manufacturer of much of the equipment, a firm called ABC-TEAM, said the acting DPW director for the region, Patrick Bennett.

A full roster of which playgrounds are completely clean and an update on the status of equipment removal will be available in time for a July 20 community meeting in Vilseck, 100th ASG spokeswoman Kathy Gibbs said. The meeting is set for 6 p.m. at the Vilseck chapel.

Community testing for the lead-based paint started in May when a regular assessment of DODDS schools in Grafenw&#246;hr and Vilseck by Svalina turned up positive samples, prompting him to expand the testing into the community.

The tests were expanded again, eventually including 80 samples from DODDS and community playground equipment in all three 100th ASG communities.

The paint was applied when allowable lead concentrations were higher back in the early- to mid-1990s, and has remained after tighter restrictions were enacted under German law several years ago, officials said.

Europe Regional Medical Command officials said last week that no cases of lead poisoning have been identified in U.S. military communities in Europe in the last 10 years. Nevertheless, DPW has decided to remove any contaminated equipment before even identifying the manufacturer that installed some of it, Bennett said.

Bennett&#8217;s agency will also perform limited testing of playground equipment in German-built American housing outside of garrison fences, though no lead paint is suspected.