Tests of wits and mettle at interrogation training ground 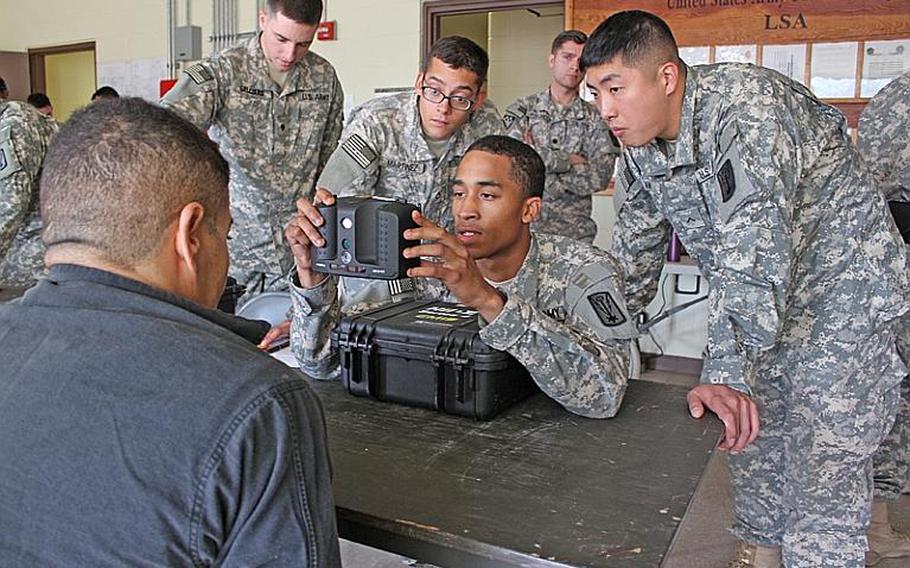 Soldiers with the 524th Military Intelligence Battalion collect biometric data from a mock North Korean "detainee" using Handheld Interagency Identity Detection Equipment during the recent Northern Vigilance exercise at Camp Carroll. The detainee's facial photo, iris scan and fingerprints were compared against a watch list for identification during the intelligence-gathering exercise, which including approximately 200 troops. (Courtesy of the U.S. Army)

Soldiers with the 524th Military Intelligence Battalion collect biometric data from a mock North Korean "detainee" using Handheld Interagency Identity Detection Equipment during the recent Northern Vigilance exercise at Camp Carroll. The detainee's facial photo, iris scan and fingerprints were compared against a watch list for identification during the intelligence-gathering exercise, which including approximately 200 troops. (Courtesy of the U.S. Army) 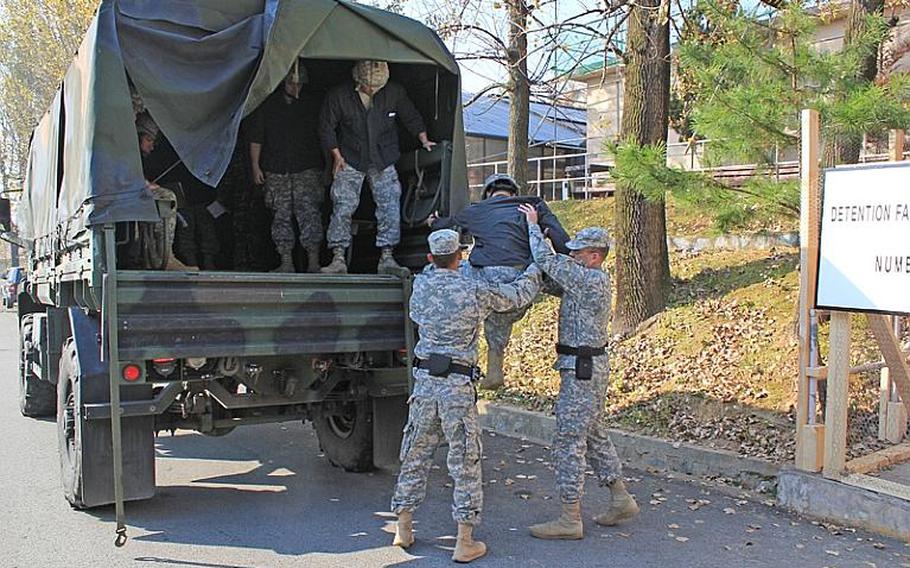 WAEGWAN, South Korea &mdash; The prisoner, a stocky, middle-age North Korean sergeant with a deep voice and an arrogant manner, glared at the petite young soldier sitting across the table from him, rolled his eyes and laughed.

&ldquo;Why should I cooperate with you?&rdquo; he asked, speaking through a translator.

Pfc. Abigail Cornejo looked down at her notepad and then at the detainee, a sniper who had ambushed a supply route and tried to assassinate approaching South Korean senior leaders.

&ldquo;If you don&rsquo;t want to cooperate, you can go back to your cell,&rdquo; the 20-year-old said politely.

The sniper leaned forward. &ldquo;If I cooperate, will you let me go?&rdquo;

In an hour-and-a-half session that was tense and tedious, the pair went round and round over the same issues.

Cornejo: &ldquo;I can&rsquo;t. I don&rsquo;t have that authority, but I do have the authority to help you out.&rdquo;

For Cornejo, this mock interrogation inside an old Camp Carroll gym turned &ldquo;detainee facility&rdquo; was a test of her mettle and her two years of military training. Not only did she have to interrogate a superior impersonating a North Korean, but she had to do it while another officer listened from the other side of a partition and evaluated her performance.

They were among about 200 participants in the 524th Military Intelligence Battalion&rsquo;s Northern Vigilance exercise in late October, which drew troops from all over South Korea and U.S. Forces Japan.

During the weeklong exercise, one of two held by the battalion each year, soldiers rehearsed what they would be expected to do in case of regime collapse or instability in North Korea, from receiving handcuffed detainees and gathering biometric data to conducting lengthy interrogations.

&ldquo;We get PFCs, and this is the first time they&rsquo;ve done this outside the schoolhouse,&rdquo; battalion commander Lt. Col. Ted Travis said. &ldquo;This is our primary training ground.&rdquo;

But this exercise covered new territory even for seasoned intelligence analysts. While many have real-life experience questioning detainees in Iraq or Afghanistan, none has ever interrogated a North Korean soldier.

And the differences in questioning members of a small insurgent cell in the Middle East or troops in the more than one million-strong, structured North Korean military &mdash; indoctrinated from birth to hate Americans and South Koreans &mdash; would be vast.

&ldquo;They have to get out of that mindset of, &lsquo;I&rsquo;m talking to a farmer by day, Taliban by night,&rsquo;&thinsp;&rdquo; Travis said. &ldquo;It&rsquo;s a different mentality.&rdquo;

As part of the exercise, South Korean officers talked about cultural nuances and things to look for when identifying possible North Korean troops. For instance, a member of North Korea&rsquo;s special operations force &mdash; the world&rsquo;s largest with about 60,000 soldiers &mdash; would be better fed and in better physical shape than a civilian in a country perpetually plagued by famine.

&ldquo;Is this a farmer or a North Korean SOF guy who threw on farmer&rsquo;s clothing to evade capture? It all helps the (intelligence) collector know what to look for,&rdquo; Travis said.

Battalion leaders said the most difficult task for intelligence troops would be gaining the trust of North Korean forces that have been taught from birth to despise Americans and expect to be treated harshly.

Clouding the picture is the fact that U.S. and North Korean troops have not faced each other in active combat in nearly six decades.

Maj. Josef Thrash, battalion executive officer, said the exercise reflects the military&rsquo;s shifting focus to the Pacific region and is an effort to prepare soldiers for what they might face from the North &mdash; not what troops may have faced in the Middle East.

&ldquo;We have to train like we fight,&rdquo; he said. &ldquo;We can go back and read all day long about who our adversary is, but if we have a chance to integrate it into our regular training, we can hone our skills in case we ever needed to use them in the real world.&rdquo;

Thrash said no U.S. servicemembers have questioned North Korean troops in recent history. While the chance for such interrogations appears unlikely any time soon, the exercise gave soldiers a chance to hone interviewing skills they will use elsewhere, including Pfc. Joshua Frederick, 22, who deploys to Afghanistan this month.

&ldquo;They can only make the training as realistic as possible, obviously, but it helps,&rdquo; he said. &ldquo;I feel like I can shake out all the kinks and jitters before I go down there and just do my job.&rdquo;

Thrash said the interrogators were not trying to find detainees&rsquo; weak spots, but to develop a rapport that they could use as leverage in gaining much-needed intelligence. For many of the mock detainees, who were presumably worried about the safety of their families inside a collapsing North Korea, that meant finding out which relatives they were most concerned about and offering to help them.

Chung, who said he tried to intimidate his questioners, estimated Cornejo had extracted only about 30 percent of what he knew. Still, he gave her high marks for finding his character&rsquo;s top concern &mdash; his imaginary brother&rsquo;s safety.