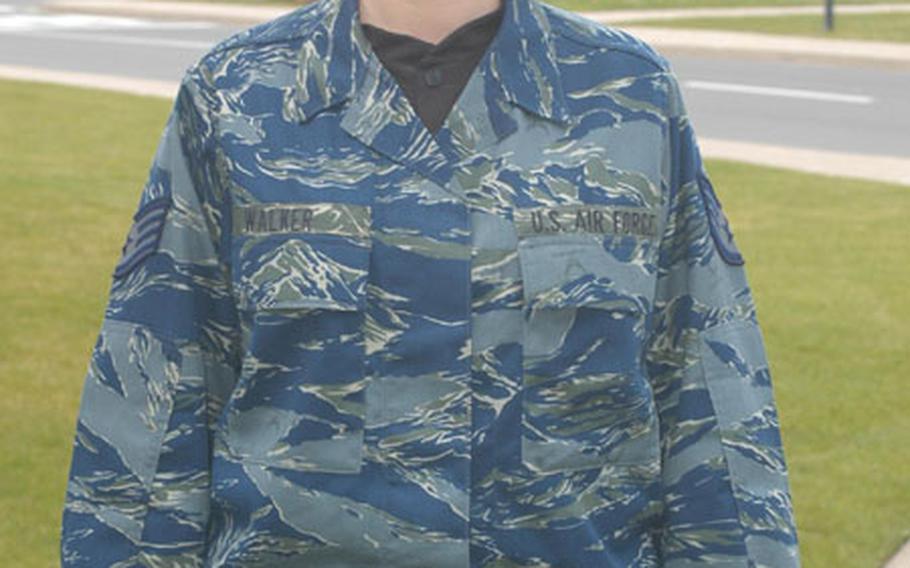 Staff Sgt. Mary Walker of the 435th Comptroller Squadron is test-wearing the Air Force&#39;s prototype uniform. For the first time, the service offers a cut for women that Walker says makes it more comfortable and versatile. (Marni McEntee / S&S)

Staff Sgt. Mary Walker of the 435th Comptroller Squadron is test-wearing the Air Force&#39;s prototype uniform. For the first time, the service offers a cut for women that Walker says makes it more comfortable and versatile. (Marni McEntee / S&S) 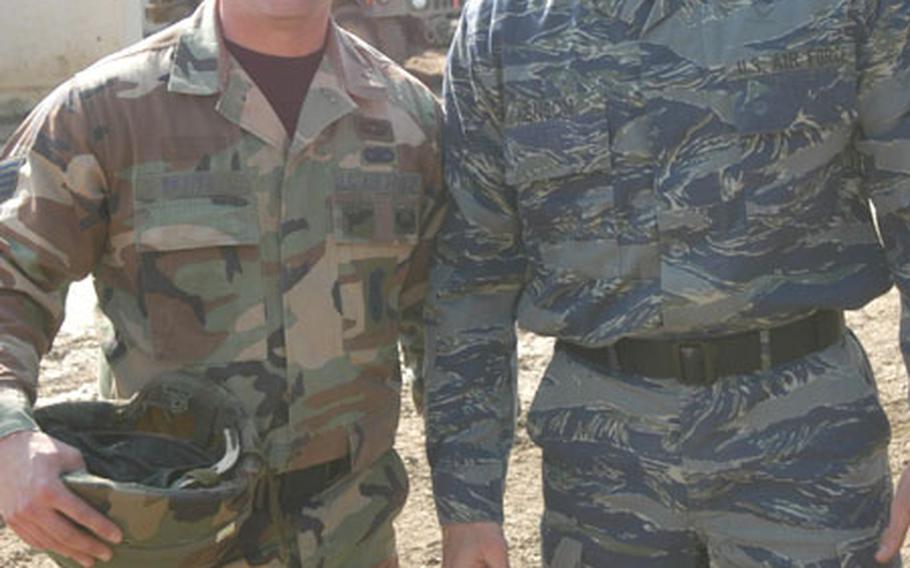 Air Force Tech. Sgt. Tony Castro gets that question a lot, but he doesn&#8217;t take it personally. It&#8217;s not him that random passers-by want to touch, it&#8217;s his new Air Force prototype uniform.

Castro, an Air Force News broadcast producer, is one of 47 airmen in the Kaiserslautern area who are test-wearing the utility uniform. The blue-gray-and-green tiger-stripe design and the eight-point hat get a lot of stares, generate a ton of questions and sometimes get a few guffaws.

By most accounts, the test-wearers like it a lot.

The nylon-cotton fabric is comfortable, durable and wash and wear. No ironing and starching. No sewing down the pockets so they lay flat. No ungainly male-style high waists on petite women. Steel-toed, no-shine boots so comfortable they barely need to be broken in.

Air Force Chief of Staff Gen. John Jumper ordered the new design last year and most bases started testing it in February and March. It will be worn through September.

All airmen will be able to comment on the design via a Web site &#8212; the first ground-up uniform selection process in the military, according to Senior Master Sgt. Robert Henson, the Kaiserslautern military community&#8217;s project officer for the new uniform. The Web site should be up by the end of April.

Henson, of Ramstein&#8217;s 786th Security Forces Squadron, said Jumper had three goals for the new design: to make a distinctive Air Force uniform, to provide a better fit, and to make the material more durable and less expensive to maintain.

Henson said he has saved an average of $50 a month in dry-cleaning bills since he got the uniform and untold hours shining his shoes.

The new uniform comes in men&#8217;s and women&#8217;s sizes with many waist-size and length options. It includes a pen pocket, an inside map pocket and a utility pocket that Walker called a &#8220;Gerber pocket,&#8221; after the popular knives many troops carry.

Two new boots also are being tested; one in black, charcoal gray or tan suede and another that is low-polish, low-shine black leather.

Some are put off by the colors. Others wonder about the tiny Air Force logo that appears all over the fabric &#8212; sometimes upside down.

&#8220;It sort of looks like someone had an address stamp and just stamped it around,&#8221; said Gen. Gregory S. Martin, commander of the Air Force Materiel Command and the first general officer to wear the prototype.

Castro said the Air Force wants to hear the good, the bad and the ugly about the test uniform. Once the feedback is in, a revised outfit could be available within about two years, with full phase-in in about five years.