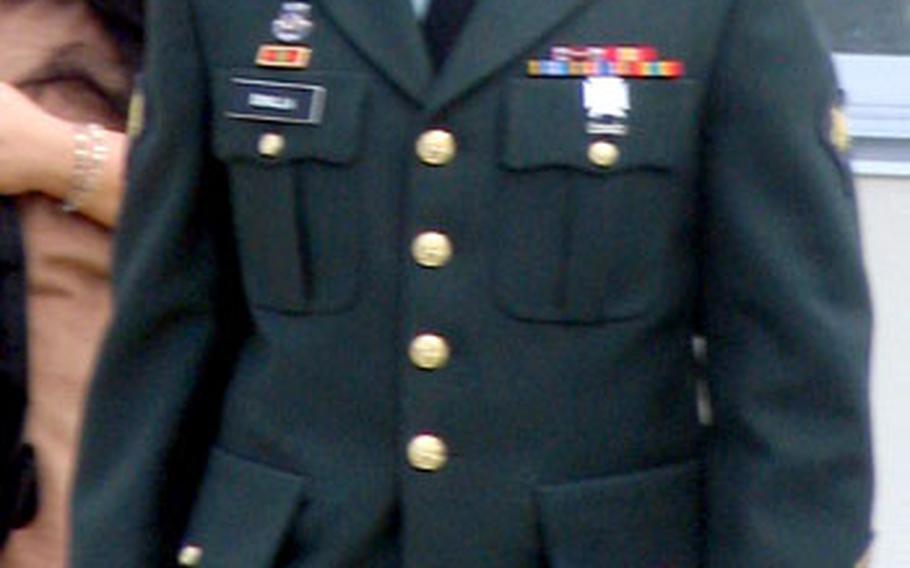 CAMP FOSTER, Okinawa &#8212; Why would a woman being raped in her home neither call police nor leave with her 10-month-old child when she had the chance?

Those are among questions facing a court-martial panel Friday after testimony wrapped up here Thursday in the trial of a soldier accused of multiple charges of rape, attempted rape, sexual assault, sodomy and adultery.

The woman, also an Army specialist and now six months pregnant, testified for almost four hours. She said the night before the incident, she&#8217;d been drinking with friends and danced with Bonilla at an Okinawa City club, practicing moves she&#8217;d learned as a professional exotic dancer.

She denied she invited Bonilla into her Kadena Air Base home after her husband left at 6:30 a.m. When she next saw Bonilla, she said, he was kneeling naked by her bed and stroking her naked body.

She testified that after returning the baby to his crib and donning a T-shirt to be &#8220;less accessible,&#8221; she returned to the living room &#8212; where Bonilla, still naked, groped himself. The woman said she again told him to leave but he again attacked her, attempting sodomy twice, finally raping her.

Army Capt. James Culp, lead defense attorney, countered that the family&#8217;s aggressive, 100-pound Rottweiler neither barked nor attacked the intruder; nor did the woman phone anyone.

Also after the incident, she dressed, left the house, walked her son in his stroller for a half hour, then returned with no assurance Bonilla was gone, Culp said.

In fact, the woman testified, he was asleep in her bed, which the woman discovered only after 11 a.m., when she awoke from a nap on the couch. She said she finally convinced him to leave by saying her husband would be home soon.

She earlier testified she&#8217;d also not wanted to upset her husband and that she&#8217;d had a previous bad experience with Army investigators in connection with a fraudulent damage claim.

Culp argued that the sex was consensual and the dog did not attack because the woman let Bonilla into the house. Also, he said, she did not report the incident until May, when she learned Bonilla was to be court-martialed for attempting to rape another specialist during a Hokkaido exercise in February.

She told a legal clerk then that Bonilla also had &#8220;hit&#8221; on her. She didn&#8217;t tell investigators of the alleged attacks until days before Bonilla was to be tried in July, while she was being prepared to testify to rebut his character. Then the original charge was dropped while the new charges were investigated.

Another specialist also has come forward, accusing Bonilla of sexually assaulting her sometime in November 2003.

The trial was to continue Friday for closing arguments and deliberation by the seven-member court-martial panel.

Stars and Stripes reporter Fred Zimmerman contributed to this report.