Tested under fire: Tiger Brigade members earn CIB in only a few weeks in Iraq Dozens of soldiers from the 256th Brigade Combat Team, known as Tiger Brigade, were presented with the Combat Infantryman Badge at a Wednesday ceremony at Camp Victory, Iraq. (Joseph Giordono / S&S)

Dozens of soldiers from the 256th Brigade Combat Team, known as Tiger Brigade, were presented with the Combat Infantryman Badge at a Wednesday ceremony at Camp Victory, Iraq. (Joseph Giordono / S&S) 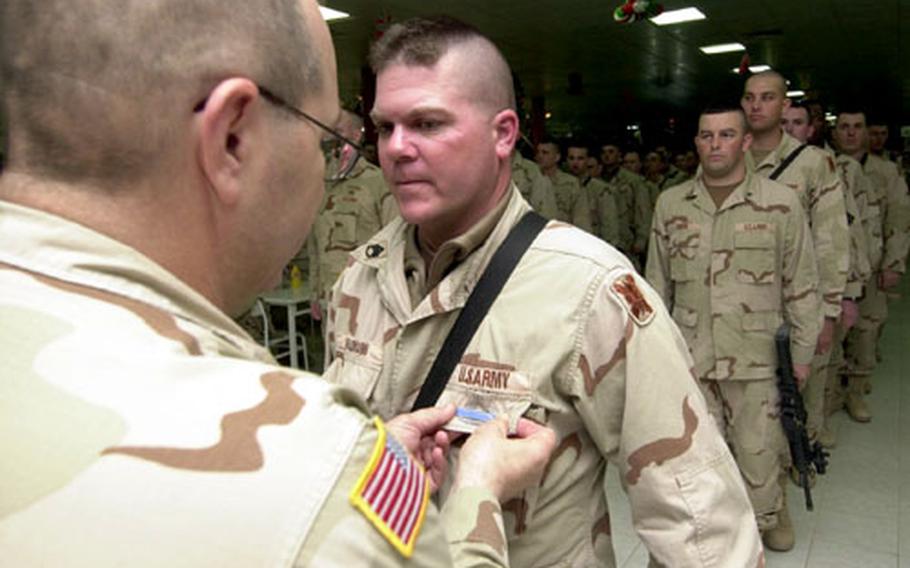 CAMP VICTORY, Iraq &#8212; The vanguard of the third wave of U.S. servicemembers in Iraq is already being tested under fire. Now they have the decorations to prove it.

Wednesday night, less than six weeks after crossing from Kuwait into Iraq, some 370 members of the 256th Brigade Combat Team were awarded the Combat Infantryman Badge, which only infantry soldiers coming under enemy fire can earn. The National Guard unit, which includes infantry battalions from Louisiana and New York, is the first part of Operation Iraqi Freedom III, the latest rotation of troops to Iraq.

Around 30 medics from the Tiger Brigade, as the 256th is known, were also presented with the Combat Medical Badge at the ceremony, held in the unit&#8217;s Tiger Den dining facility.

For some, the wait was shorter than for others.

It surprised him that he was firing at insurgents so early into the deployment, he said. But since then, his unit has had some sort of enemy contact about every other day, he said.

For Staff Sgt. Paul Hiestand, of Company B, 3rd Battalion, 156th Infantry, first contact came about two weeks after arriving in Iraq. He was on a gunslinger mission when insurgent mortars rained down on his patrol from close range.

A few days later, insurgents attacked his six-man team with rocket-propelled grenades and small-arms fire. Hiestand and the other soldiers returned fire, eventually taking prisoners to the brigade detention facility.

But, Hiestand pointed out, only five of the six soldiers earned the CIB. The sixth soldier is an artilleryman who was working with the infantry soldiers. Because the regulations for the CIB specifically state the badge can be earned only by an infantryman, as defined by job title, the artilleryman, who was in combat with the infantry soldiers, does not qualify for the award.

In recent months, with tens of thousands of U.S. troops holding various job titles pressed to serve infantry-type roles, many have questioned whether the award should be broadened.

&#8220;Personally, I think he should get the CIB, too,&#8221; Hiestand said after receiving his badge. When the ceremony ended, Hiestand and other members of the patrol presented their CIBs to the artilleryman, a comrade in arms from the second incident.

Broadening the CIB would not be without precedent.

At Wednesday&#8217;s ceremony, it was noted that the Combat Medical Badge, established in 1945, was expanded in 1991 to medics assigned to ground soldiers other than just to infantry medics.