TEST - Cemetery for children of U.S. servicemembers is site of solemn ceremony 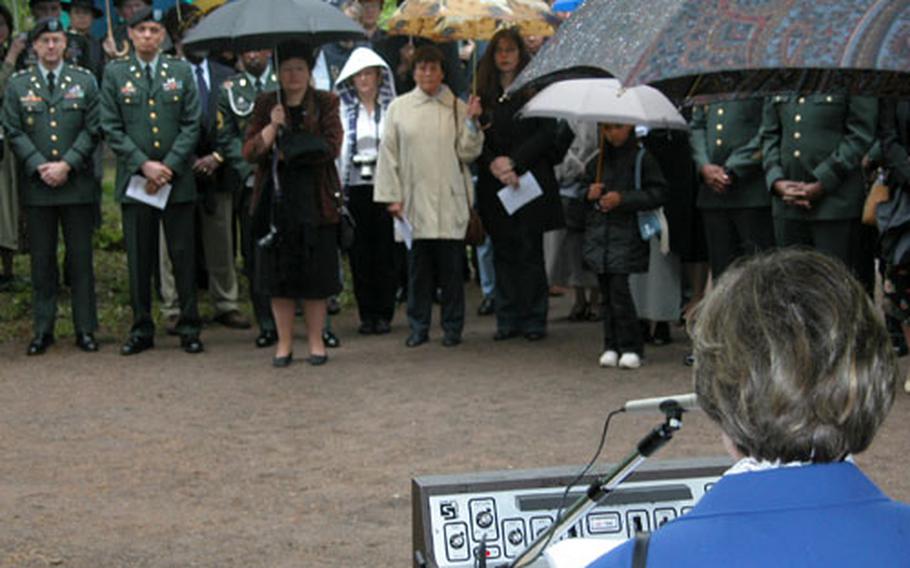 Stefanie Merai, German president of the German American International Women&#39;s Club, addresses the crowd at the May 17 Kindergraves ceremony. The ceremony was to honor the memories of the 451 infant children of U.S. servicemembers buried at the site in the Kaiserslautern cemetery. (Charlie Coon / S&S)

Stefanie Merai, German president of the German American International Women&#39;s Club, addresses the crowd at the May 17 Kindergraves ceremony. The ceremony was to honor the memories of the 451 infant children of U.S. servicemembers buried at the site in the Kaiserslautern cemetery. (Charlie Coon / S&S) The gravestone of "Baby Newman, 1960," among the children&#39;s graves at Kaiserslautern cemetery. Hundreds of infant children of U.S. servicemembers are buried in the cemetery. German and U.S. volunteers care for the graves. (Charlie Coon / S&S) 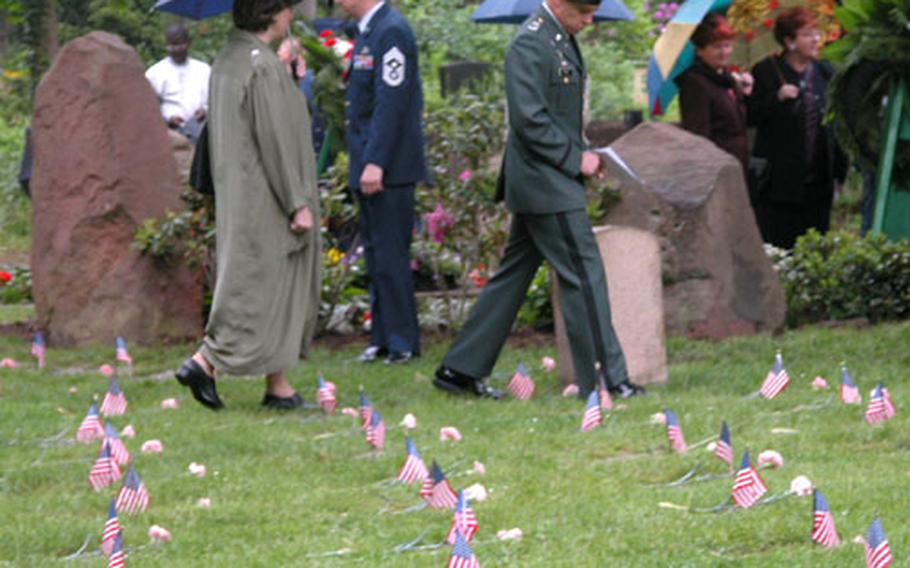 Spectators walk among the children&#39;s graves following the May 17 ceremony to honor the memory of the 451 infants of U.S. servicemembers buried at the Kaiserslautern cemetery. (Charlie Coon / S&S)

KAISERSLAUTERN, Germany &mdash; Not all &ldquo;soldiers&rdquo; make it home.

Some tiny, innocent ones are buried at Kindergraves. They were born to U.S. military members serving in the Kaiserslautern area. Most were infants who lived just a few days.

There are 451 babies interred here, a small plot in the main cemetery of this city in western Germany. The children died between 1952 and 1971 and were so young that no one really &ldquo;knew&rdquo; them.

They&rsquo;d been buried at two locations within the vast cemetery. In 1986, a group of Germans and Americans purchased a plot and brought the babies to one site.

The graves are tended to by volunteers.

&ldquo;We have children of American servicemen and women who were not returned home to the U.S.,&rdquo; said Terence DeLay, co-chairman of the Kaiserslautern Kindergraves Memorial Foundation. &ldquo;It&rsquo;s up to us &mdash; the living &mdash; to care for their graves because their parents are unable to. The parents are in despair, I&rsquo;m sure, because they haven&rsquo;t been able to return their children to the U.S.&rdquo;

The military and American Red Cross would not transport the bodies back to the States. So the parents went home, leaving their infant children behind at the Waldfriedhof (forest cemetery).

&ldquo;They [the parents] have told me how important it is for them to know where their little babies are buried,&rdquo; said Bruni Putz, former president of the Federation of German-American Clubs.

&ldquo;It&rsquo;s a very good thing for the Germans and Americans to do something like this together out of friendship.&rdquo;

A ceremony was held May 17 at the Kindergraves, just as it is every year on the Saturday after Mother&rsquo;s Day. The site itself is small &mdash; about 20-by-40 paces. But it&rsquo;s big enough for 451 gravestones placed closely together. The little babies don&rsquo;t take up much space.

The ceremony featured a color guard and a man who sung the German and American anthems. A light rain fell fittingly from the thick, gray sky. A few umbrellas popped up in the crowd of about 75 people, which was solemn as it listened to the short speeches.

A pink carnation to symbolize a mother&rsquo;s love had been laid across each headstone; a tiny U.S. flag was stuck into the ground next to each.

In Germany, gravesites are recycled. They are leased for 25 years. The lease is up on Kindergraves in 2011.

After the ceremony, most of the crowd retired to the warmth of a nearby chapel for a coffee-and-cake reception. A few, though, stayed behind and walked among the Kindergraves.

The stones had just one year engraved on them instead of the usual &ldquo;born-died&rdquo; dates, noted Lt. Col. Jerry Clinkscales, battalion commander for the 21st Theater Support Command.

Clinkscales, who is black, also saw a marker that bonded him personally to Kindergraves.

&ldquo;There was a headstone that listed the black university fraternities and sororities with their dedication to the sites,&rdquo; said Clinkscales, a graduate of Alabama A&M in Huntsville and a member of Omega Psi Phi.

&ldquo;In 1971 [when the last Kindergraves baby was buried], I was only 10 years. That [listing of black fraternities] drew a connection for me.&rdquo;