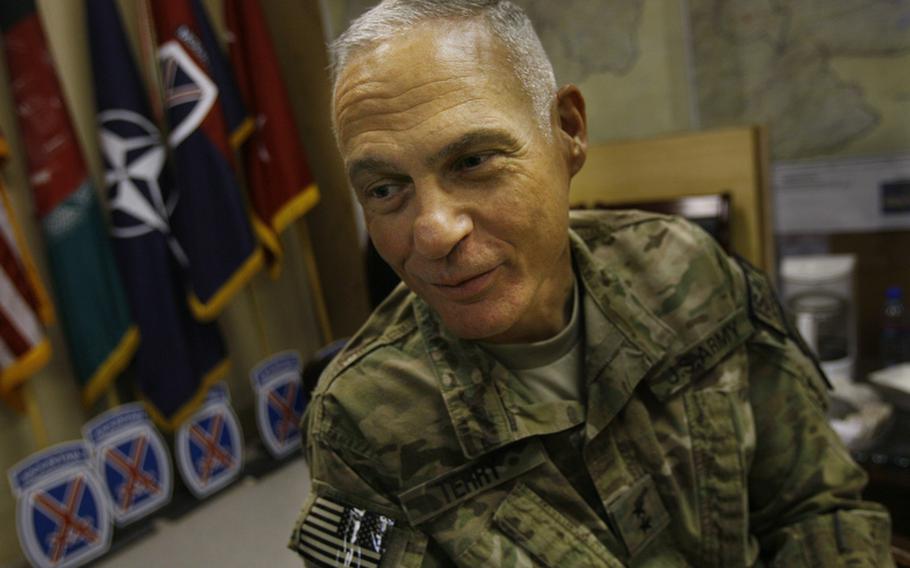 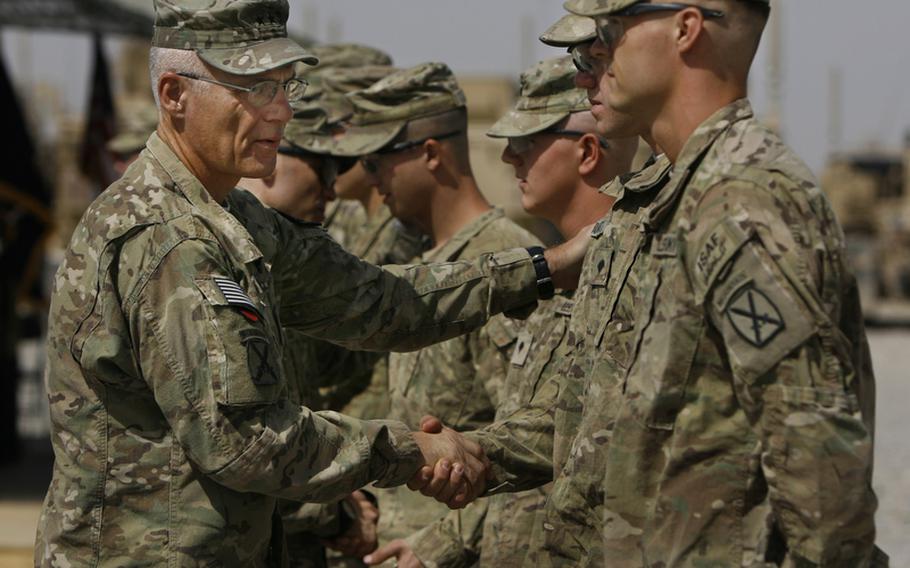 KANDAHAR AIRFIELD, Afghanistan &mdash; Sitting in his office at the headquarters of Regional Command-South, the commander pondered what was toughest about his year in charge. The answer came neither quickly, nor lightly.

&ldquo;Taking care of hard challenges, I think, is our business. So it&rsquo;s not like any one stands out. It&rsquo;s just what you do,&rdquo; said Maj. Gen. James Terry, who on Saturday transfers authority of RC-South to Maj. Gen. James Huggins of the 82nd Airborne Division.

Having overseen much of President Obama&rsquo;s surge strategy in southern Afghanistan, where many of the additional troops and resources have been allocated, Terry has dealt with his share of the hard stuff.

During the last year, coalition forces in the south have taken control of large swaths of land in the Taliban stronghold of the Arghandab River Valley, including Sangsar, hometown of Taliban leader Mullah Mohammed Omar and considered the birthplace of the movement.

&ldquo;You now have Afghan National Security Forces, with coalition forces, sitting and holding the terrain,&rdquo; noting that in previous years, Canadian troops cleared the area but couldn&rsquo;t hold it, &ldquo;simply because they didn&rsquo;t have the density of forces that they needed.

&ldquo;Even if you go back 30 years, the Russians didn&rsquo;t kick the mujahedeen out of Zhari and Panjwai,&rdquo; Terry said.

Aside from cutting off enemy access, the infiltration of U.S. and Afghan forces in the region has affected the narcotics trade, which largely finances the insurgency. According to Terry, nearly $66 million worth of drugs have been interdicted in 2011 in RC-South, a region considered the center of global opium production.

Aside from taking control of the Taliban heartland, Terry is especially proud of strides made toward the professionalization of Afghan security forces and, most notably, the Afghan Local Police.

The division&rsquo;s village stability operations work to connect locals to their provincial and district governments through the shura process, while also helping to provide for long-term security and governance by fortifying areas with local police.

&ldquo;I think it&rsquo;s a great program because it&rsquo;s where the communities decide to push back from the insurgency,&rdquo; Terry said.

Under Terry&rsquo;s leadership, RC-South has also made the reintegration of low-level Taliban a priority. He knows the program has its critics, though, and draws parallels from the American experience when noting its merits.

&ldquo;I think in our own nation&rsquo;s history, we&rsquo;ve had similar challenges post-Civil War, where brothers were fighting brothers. That&rsquo;s kind of the case you have here, relatives fighting relatives. I think it&rsquo;s time for them to come back home,&rdquo; Terry said.

&ldquo;I&rsquo;m not asking anybody to surrender,&rdquo; he said. &ldquo;I think it&rsquo;s time for the insurgents to come back home and be a part of the Afghan community and society and move toward a brighter future out there. That&rsquo;s really what reintegration at our level is all about.&rdquo;

But success in southern Afghanistan has come at a price, and much of the sacrifice has been made by Terry&rsquo;s own 10th Mountain Division.

When he talks about his soldiers, his southern accent slows and deepens. His eyes quickly reveal that this is what is closest to his heart.

&ldquo;They&rsquo;re just young, I look at them like they ought to be my grandkids. To think they were nine, 10 and 11 years old 10 years ago, and understand everything that they signed up for, I think is tremendous testimony to these kids,&rdquo; Terry said. &ldquo;Some real sacrifice going on out there, and they just keep coming back. I think they come back because they feel a certain commitment to getting it right.&rdquo;

Terry will assume command of V Corps, in Wiesbaden, Germany. He is scheduled to return to Afghanistan in June where he&rsquo;ll serve as the International Security Assistance Force Joint Commander in Kabul.

&ldquo;It&rsquo;s a tight turnaround, but I think it&rsquo;s good. I kind of get to missing the place; it kind of grows on you,&rdquo; Terry said.

After wrapping up his duties with the 10th Mountain Division in early November, Terry is looking forward to taking time off at his secluded cabin on Burnt Mountain near Talking Rock, Ga., before heading to Germany in January.