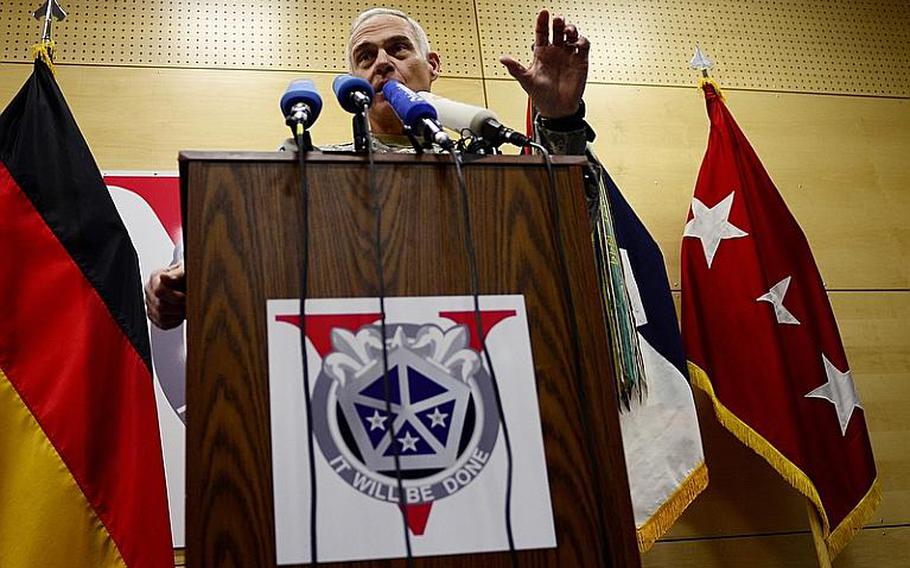 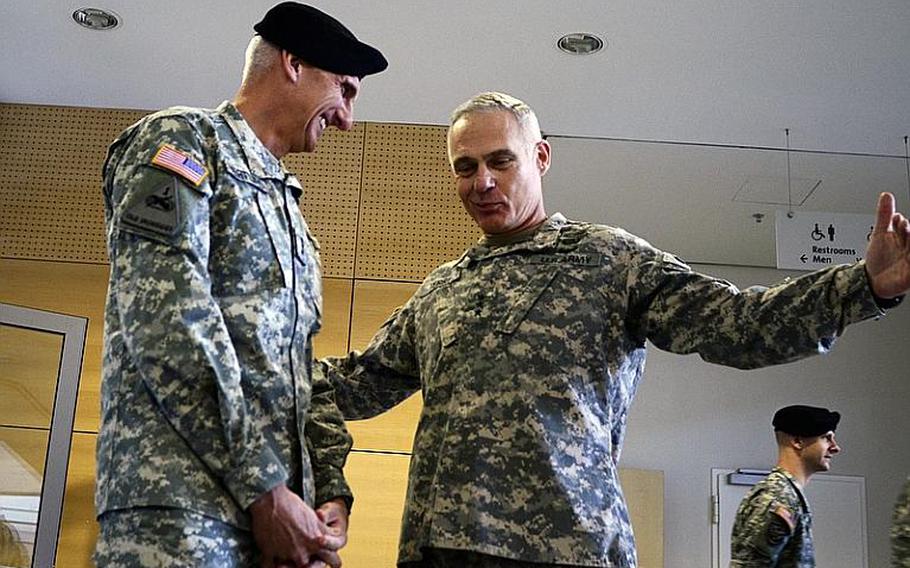 Each day, as Lt. Gen. James L. Terry makes his way into his new office at the end of the hall, he passes the photographs of the corps commanders that came before him.

&ldquo;I walk in every morning and I look at the pictures in the hall and somehow I hold myself accountable to everything that they&rsquo;ve achieved in relationship to the history of the V Corps,&rdquo; he said.

&ldquo;You can never push aside your history and your lineage, and it&rsquo;s those kind of things that carry you forward in a hard moment.&rdquo;

And hard moments haven&rsquo;t been rare for the 33-year veteran and Georgia native, who is known for his visits to the battlefield and his love for the &ldquo;Joes.&rdquo;

&ldquo;I like to get out,&rdquo; he said. &ldquo;You can learn a lot talking to soldiers.&rdquo;

Before taking over V Corps, Terry served as both the commander of the 10th Mountain Division and Regional Command-South in Afghanistan. The 10th Mountain Division, a rapid deployment light infantry force, has had at least one brigade deployed to a war zone for the last 10 years. Their losses, and those of the coalition forces he has commanded, stay with Terry.

&ldquo;I think the hardest decision a commander ever makes, is the decision where you put soldiers in harm&rsquo;s way, where they potentially lose their life, or their life is forever changed,&rdquo; he said. &ldquo;That&rsquo;s the gravity of it. And I always try to weigh that when making decisions.&rdquo;

In June, Terry will return to Afghanistan with most of the 700 soldiers that constitute V Corps, now headquartered in Wiesbaden, to serve as commander of the International Security Assistance Force Joint Command. As IJC commander, Terry will oversee coalition operations nationwide.

&ldquo;We&rsquo;re kind of the connective tissue between that strategic level and a tactical level,&rdquo; he said.

As IJC commander, one of his first priorities will be helping to prepare Afghan forces to take over security operations. In the meantime, he hopes that the civil leadership at both the local and national levels will take hold.

&ldquo;They&rsquo;re already just flat tired of war,&rdquo; Terry said about Afghans. &ldquo;Frankly, you talk to them and they don&rsquo;t want to go back to the Taliban, but they do want a voice.

&ldquo;We have to focus on moving the Afghan security forces into the lead,&rdquo; he said. &ldquo;In 2014, the security transitions over to the Afghans.&rdquo;

The modern incarnation of V Corps represents a shift in the structure of the Army, and is the only corps based outside the U.S. At present, it does not command multiple divisions, but rather is a headquarters unit designed to lead in an increasingly asymmetrical battlefield. In future operations, the command apparatus will be able to remain constant, while various assets are attached to it for evolving missions.

&ldquo;The Army is a learning organization,&rdquo; he said &ldquo;and the ability to adjust has just been phenomenal over the last 10 years.&rdquo;

Formed in 1918, V Corps was nicknamed Victory Corps for its rapid advance in the Meuse-Argonne Offensive during World War I. In 1944, it landed on the beaches of Normandy and fought in the Battle of the Bulge. The corps moved to Germany in 1951 where it defended the Fulda Gap during the Cold War.

Elements of the corps served in Bosnia and Herzegovina as well as Kosovo before shifting to the Middle East for operations in Iraq and Afghanistan. In its history, the 1st Infantry Division, the 3rd Infantry Division and the 101st Airborne Division have all been organized under its command, among others. The corps moved to its current location in Wiesbaden in August 2011.

Terry said he is looking forward to his return to Afghanistan and smiles when he speaks of his affection for Afghans.

&ldquo;The Afghan people remind me a lot of the folks back home&rdquo; he said. &ldquo;I find it pretty easy to connect with them. You just got to love them, they&rsquo;re a resilient people.&rdquo;