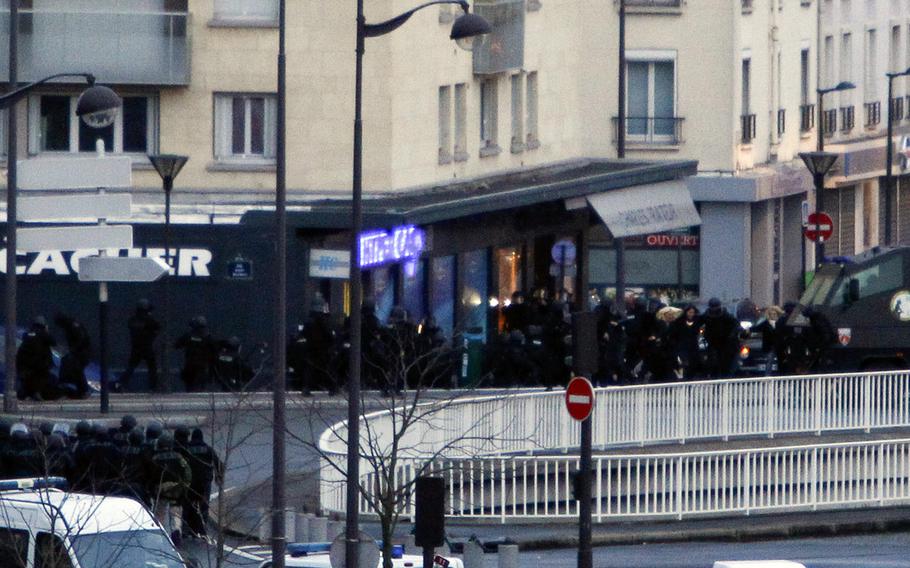 French security forces storm a kosher supermarket in Paris on Friday, Jan. 9, 2015, where a gunman had taken several hostages. (Panoramic/Zuma Press via TNS)

U.S. military installations across Europe are increasing security in the wake of the recent terrorist attack in Paris and disrupted plots in Belgium, Germany and France, U.S. European Command said on Wednesday.

“U.S. European Command directed its component commands to implement additional force-protection measures and random security enhancements at facilities across the EUCOM area of responsibility,” said Navy Capt. Greg Hicks, EUCOM spokesman. “We continually assess threats to our forces with and alongside our host-nation counterparts and take appropriate measures based on those assessments.”

Hicks declined to elaborate on the specific steps being taken or to offer an assessment of the threat.

Typically, enhanced force-protection measures can vary from base to base. They can include such actions as more stringent inspections of cars entering installations, random bag checks and increased security patrols.

“We must be cognizant of the increased risk of counter demonstrations/revenge attacks,” said a Jan. 15 advisory issued to the Army community in Germany, which also called for enhanced measures. “While the current focus may be situated around events in France and Belgium, similar violence may occur within other countries in the USAREUR area of operations or worldwide.”

Some Defense Department schools on base are also taking steps to bolster security, such as Kaiserslautern High School, where officials advised parents on Wednesday that security had been elevated to force protection “Bravo plus.”

Parents are advised to carry multiple forms of identification when picking up children, and the school has implemented other security measures, including random backpack checks.

“As a school system, we rely exclusively on commanders’ assessment of threat conditions” and for adequate security to provide curricular and extracurricular programs, said Bob Purtiman, a DODDS-Europe spokesman.

Force-protection bulletins have urged troops to remove from their cars any stickers or decals that identify them as servicemembers or Americans. While that regulation has been in place for several years, some military communities are now keeping a closer watch to ensure the rules are followed.

The moves are the latest in a series of recent actions by U.S. European Command, which in November ordered all military personnel to refrain from wearing uniforms off base. That directive was part of an effort to lower the profiles of troops in the community. EUCOM also has urged personnel to be cautious about revealing too much information on social media sites to ensure geographical locations are masked.