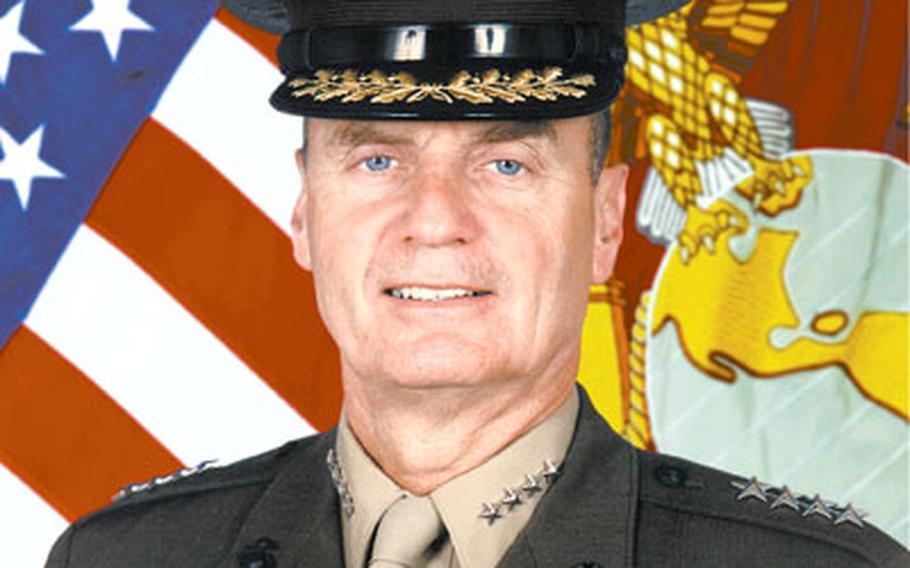 Whether it was a formal signing ceremony or a closed-door meeting, the subject of terrorism dominated a recent two-day visit to Turkey by Gen. James L. Jones, head of the U.S. European Command.

Jones inked a memorandum of understanding that pledges U.S. support to a new NATO center dedicated to fighting terrorism. The Marine general also took part in private meetings with members of the Turkish general staff to discuss what Jones called &#8220;the common struggle against terrorism.&#8221;

&#8220;We discussed specific Turkish concerns, obviously, with regard to the PKK (Kurdistan Workers&#8217; Party),&#8221; Jones said at a brief news conference Friday, according to a EUCOM transcript.

&#8220;We also discussed the wider-ranging issues of terrorism as it affects not only our respective countries, but the international order as well.&#8221;

Pressed for details on the PKK, Jones didn&#8217;t reveal much, except to say that on a bilateral basis, the United States and Turkey have taken steps to improve communications, including the exchanges of liaison officers.

Outside of Turkey, the struggle against the PKK has, for the most part, been largely overlooked since the U.S.-led invasion of Iraq in March 2003. Jones&#8217; visit was intended to assure Turkey that the United States hasn&#8217;t forgotten its battle against terrorism.

Since 1984, when the Turkish-based PKK took up arms, about 30,000 people have died, most of them ethnic Kurds. The Kurds have long wanted a homeland of their own.

Kaufman, who traveled to Turkey, characterized the closed-door meetings with Turkish military officials as &#8220;a productive, frank discussion between two NATO allies on how to address terrorism in the region.&#8221;

A NATO center solely dedicated to fighting terrorism is viewed as a logical step in what many believe will be a lengthy campaign against the likes of Osama bin Laden or Abdullah Ocalan, the jailed leader of the PKK.

&#8220;Turkey is ideally suited to host the Center of Excellence-Defense Against Terrorism,&#8221; Jones was quoted as saying in a EUCOM news release. &#8220;Turkey has the second largest armed forces in NATO, is strategically located, and has over 30 years [of] experience combating terrorism.&#8221;

Besides the United States and Turkey, participants in the venture include Bulgaria, Romania and the United Kingdom. The memorandum of understanding signed by the United States in Ankara, where the center is located, covered the level of funding and participation by U.S. staff, students and guest speakers. Three U.S. military personnel will be assigned to the center, including a Navy captain who will serve as the deputy commandant.

The center held its first class in March, and spent much of the year getting itself up and running. Officials say it will complement the work being done at the George C. Marshall European Center for Security Studies in Garmisch, Germany.