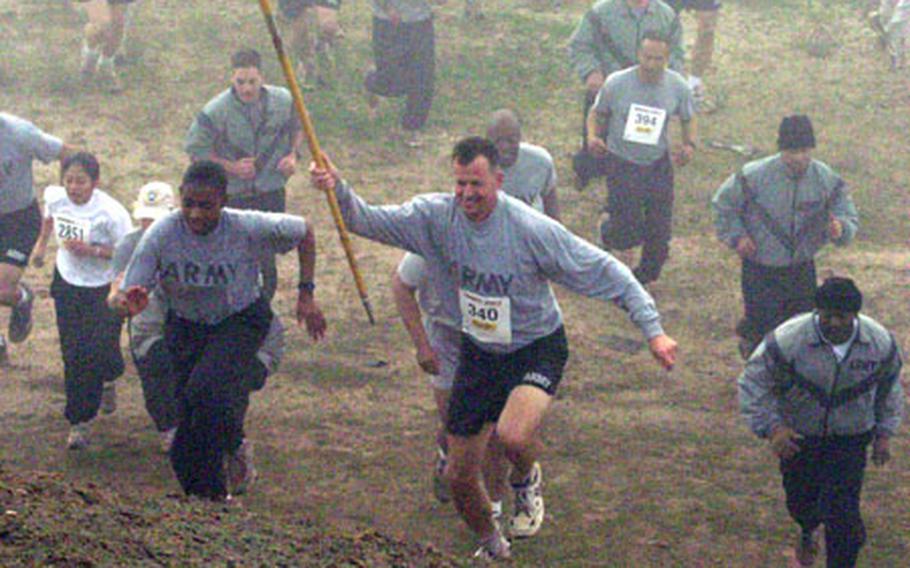 That&#8217;s what the 150 or so runners who fought cement-mixer mud and zero visibility found at Iraq&#8217;s Camp Speicher on Sunday. And the fun run seemed to do them good.

There were 10 kilometers of torment, maybe. But there were no mortars.

The 4th Aviation Brigade, 4th Infantry Division, has hosted several races to let soldiers blow off steam. This one was hosted by the 2nd Battalion on the anniversary of its deployment orders. But the runners came from all over.

They ran for prizes of knives and gift certificates. They collected cards along the route to use in a poker match afterward, vying for a trip to Las Vegas. The event was sponsored by Runner&#8217;s World magazine, Surefire, Pepsi, CamelBak and Stars and Stripes.

Though Tikrit, Saddam Hussein&#8217;s hometown, is reputed to be dangerous, the huge soggy frontier surrounding Speicher made it an ideal place for a rugged 10k.

About 300 people signed up &#8212; organizer Maj. Scot Arey believed it was for the shirts. But about half actually showed, hitching rides via helicopter or Humvee.

Rains pummeled Speicher at about 3 a.m., churning the earth to adhesive brown foam. Fortunately, the charge up two bunkers was on mostly hard green, sort of a natural Iraqi Astroturf.

There were wrecked Iraqi fighter jets along the Speicher route; apparently the camp was once an air force academy and several planes were left behind.

Parts of the course looked more like Ireland than Iraq, all green on the ground while soupy skyward. Others were covered in the rounded gravel of riverbeds. And then there were stealth puddles.

You could hear a hankering for home in their voices. One woman who won a prize told the crowd her unit was headed back in a week. The crowd booed; she smiled.

Arey wished them all good luck, regardless of rotation date.