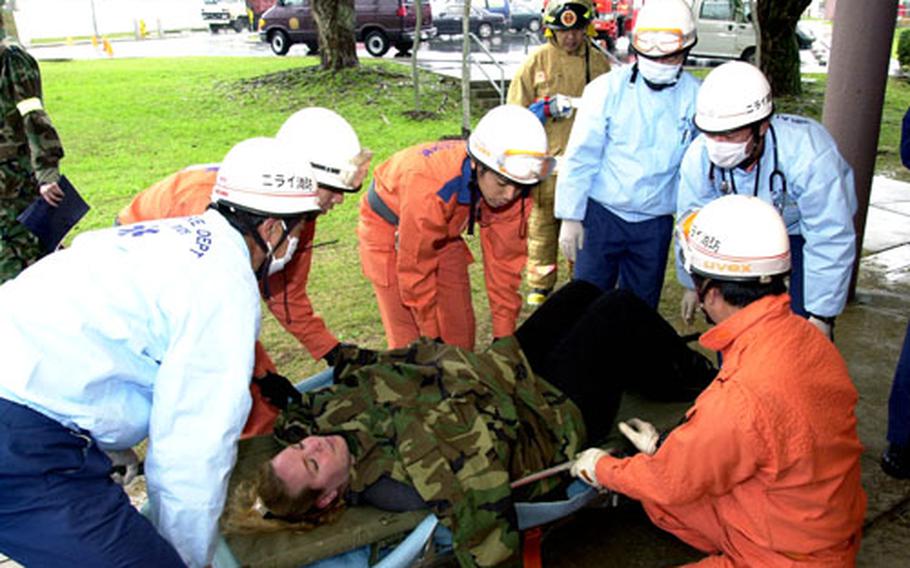 The Nirai Fire Department lifts Judith Canez on a stretcher during a mass casualty exercise at Torii Station, Okinawa, on Tuesday. Canez’s prosthetic abdominal wounds were treated by Army soldiers in an exercise designed to simulate a terrorist attack. (Eric Slavin / S&S)

The Nirai Fire Department lifts Judith Canez on a stretcher during a mass casualty exercise at Torii Station, Okinawa, on Tuesday. Canez’s prosthetic abdominal wounds were treated by Army soldiers in an exercise designed to simulate a terrorist attack. (Eric Slavin / S&S) 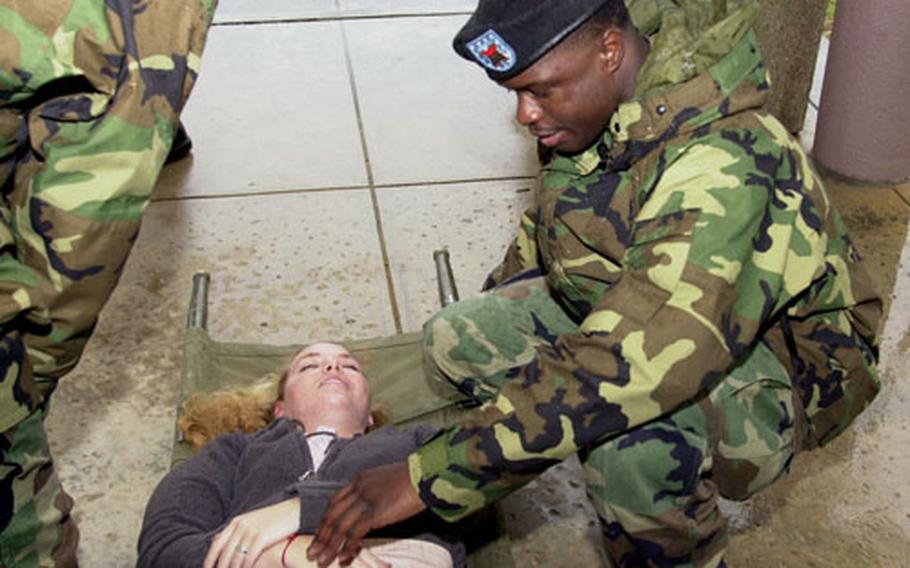 Spc. Keith Parker tends to Canez before she is load onto a stretcher. (Eric Slavin / S&S)

The mortar exploded in the Torii Station Education Center on Okinawa at noon, leaving Crystal Mumphry covered in prosthetic burns and charcoal dust.

She grasped at the concrete wall, trying to support her weakened limbs. Minutes later, Nirai Fire Department first responders found her and others suffering from stomach wounds, smoke inhalation and other maladies.

It may have been only an exercise, but everything from coordination with different commands to triage help from soldiers was designed to simulate a real terrorist attack during the mass casualty exercise Tuesday at Torii Station.

Spcs. Keith Parker and Dara Anderson were drawing their weapons in an unrelated exercise when the call for help blared over the station&#8217;s newly installed speakers.

Both dashed to the triage scene. They checked victims&#8217; wounds and breathing, looking for any new symptoms of trauma.

Two victims at the scene suffered from psychological trauma. While one screamed, the other walked around dazed but otherwise seemed well. The screaming victim drew more attention, but the dazed victim walked around in a circle and passed out on the grass before &#8220;dying.&#8221;

&#8220;That&#8217;s why it&#8217;s important to continue reassessment and keep an eye on everyone,&#8221; said Navy Chief Petty Officer Bruce Barnes, who runs the Torii Station medical clinic and trained the soldiers during the exercise.

Soldiers with nonmedical specialties may be placed in situations during an attack in which someone they know is gravely injured. By practicing under the most realistic conditions, they improve the chances that they&#8217;ll be able to provide the best help possible during an emergency, Barnes said.

Meanwhile, coordinators dispatched information to both the emergency operations center at Torii Station and the Japanese mainland. Anti-terrorism officer Evelyn Byrd reported each part of the emergency process via walkie-talkie to Army command. The demand for immediate information from the command and the local population is immense, Byrd said.

It&#8217;s also a challenge for the medical teams tending to the wounded, Barnes said.