‘Terrain denial’ may be new blueprint for rebuilding in Iraq 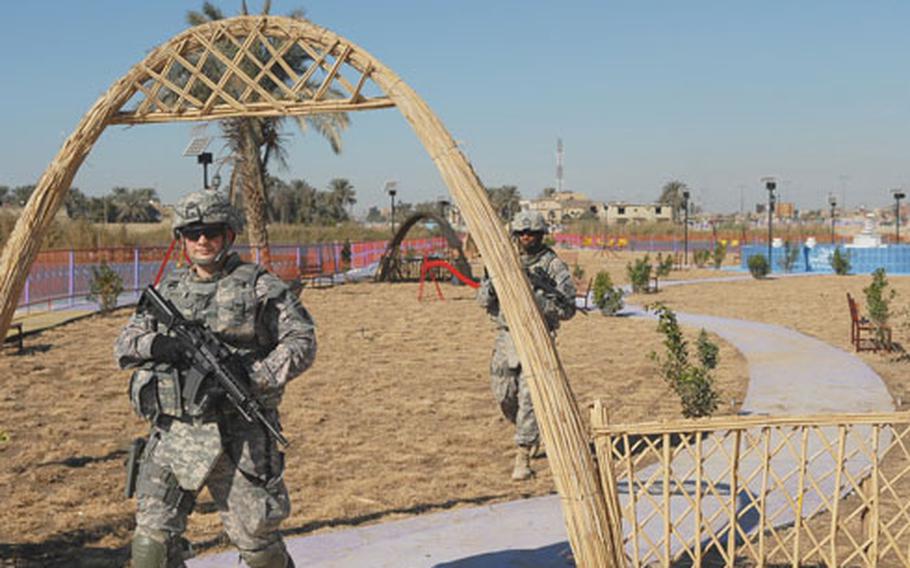 Capt. Philip O’Brien (front) and Sgt. Curtis Calhoun walk under an arch at Wishbone Park in Baghdad’s Sadr City district. The peninsula that the park sits on was once overgrown with weeds, allowing hidden enemy fighters to spy on a nearby joint security station. (James Warden/S&S)

BAGHDAD &#8212; When U.S. forces first went into Sadr City last spring, they knew rebuilding was going to be critical to stamping out tensions in the restive Baghdad slum. Yet the effort was coming over five years into the war.

Sadr City may have been desperately short of key services &#8212; even by current Iraqi standards &#8212; but stateside war weariness meant Congress was no longer willing to sign a blank check for Iraqi reconstruction.

But the Americans brought with them a novel tactic dubbed "non-lethal terrain denial" that the 4th Infantry Division developed in 2007 during its preparations to deploy to Iraq. The tactic, which was called "Steadfast Falcon" during the planning stages, was a new, focused way of using civil reconstruction projects to create an inhospitable environment for enemy fighters.

Leaders brought Steadfast Falcon with them to Iraq but didn&#8217;t have a chance to put it into action for the first several months they were in Baghdad. Then Sadr City exploded in March in response to the Iraqi government&#8217;s crackdown on Shiite militias in Basra.

Muqtada al-Sadr, a cleric whose Mahdi Army dominated the slum, agreed to a cease-fire after hard fighting devastated his supporters. Under the terms of that cease-fire, U.S. forces could go into the southern third of the previously off-limits area, while Iraqi army units would control the northern two-thirds of Sadr City.

The stage was set for Steadfast Falcon to take flight.

Multi-National Division &#8212; Baghdad planners have since duplicated the approach in no fewer than seven areas across the Iraqi capital, creating an approach that leaders think could become doctrine for counterinsurgency warfare.

Rebuilding is nothing new in Iraq. The United States has been in the reconstruction business since shortly after the initial invasion &#8212; with generally dismal results. An unpublished federal study determined that huge portions of money spent on such efforts were wasted because of poor oversight and mismanagement.

But even with the best oversight, many of these rebuilding projects have done little to win over the Iraqi people in the short term. Reconstruction efforts have often been scattered across the capital.

Resources have also been poured into fixing the most persistent problems, such as massive, war-ravaged facilities like wastewater treatment plants and power plants. The projects are so big that leaders will have to wait years in some cases for them to come on line, while even division-level leaders are limited in their ability to influence projects of this scale, said Brig. Gen. Robin Swan, deputy commander of the 4th Infantry Division.

Commanders knew they&#8217;d need to show results much quicker when they went into Sadr City.

"Just like any area of the world, there is an issue of impatience," Swan said.

Leaders have far fewer limits at the local levels. Young lieutenants and mid-level noncommissioned officers have long spearheaded the projects that they thought would best benefit the communities they oversee. These were the people who would take back the cities for 4th Infantry Division, which just returned to Texas after its 15-month tour ended in early February.

Planners worked out the details before they even went to Iraq. The Americans would cede large infrastructure projects to the Iraqi government, who would be helped by the State Department and the most senior military leaders.

Ground forces would push forward numerous, quickly completed, exponentially smaller projects that locals could use shortly after the Americans arrived. The contracts also required local laborers to be hired, although contractors and skilled workers often came from outside the area.

American units in the past have scattered these projects across Baghdad. This time, though, leaders would concentrate the projects in a single problematic area to magnify their impact, similar to the way an attacker would mass forces in a conventional war.

"You can&#8217;t be strong everywhere, but you can be strong at certain points along the way," said Maj. Gen. Jeffery Hammond, the 4th Infantry Division commander.

Soccer fields are typical of the projects that planners envisioned. They can be started and finished in weeks and require few skilled workers. Once complete, children flock to them and families have a stake in seeing that they don&#8217;t become insurgent hotspots.

These projects have both a tactical and a strategic purpose. Insurgents are easier to spot in well-maintained areas and have a physically harder time shooting off mortars and rockets from built up areas. But more importantly, local are more hostile to militants in their neighborhood when they are getting the services they want. In that respect, the "terrain denial" part of the new approach actually comes from everyday Iraqis instead of U.S. or Iraqi forces.

At the same time, units often kicked off the rebuilding process by seeding microgrant money through key business areas to give the economy a shot of adrenaline. In order to improve the impact, soldiers would usually only hand over the second half of their payment once they saw the shop owner had actually made improvements to the store or increased inventory.

Four principles guided everything, officials said: Get in, get results early, get real and lasting results and don&#8217;t do anything that the Iraqi government could do itself. Said Hammond: "We immediately piled on once we reached a level of security with precision non-lethal investments."

By the numbersTotal number of projects: 569

Attacks in the beginning: 13 per day

How does it work?Phase 1 (0-5 days): Meet with local leaders to find out what projects they need.

Phase 2 (5-10 days): Obligate money to quickly completed, short-term projects and sign memorandums of understanding with the appropriate Iraqi authority to ensure they are willing to maintain the projects once they&#8217;re completed. Publicize the work that is being done. Start humanitarian assistance programs if available.

Phase 3 (21+ days): Begin turning over the projects to the Iraqis in highly publicized ceremonies while continuing to manage the remaining projects and transition security to Iraqi Army or Iraqi Police control.