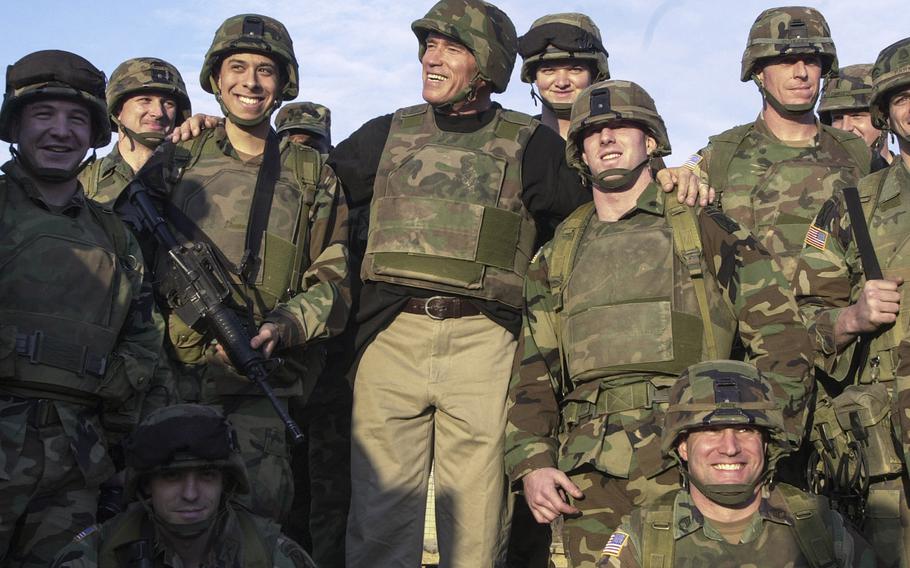 EAGLE BASE, Bosnia and Herzegovina — Army Spc. James Miller calmly ate his dinner while he looked at a sight he never dreamed he’d see — Arnold Schwarzenegger chowing down a few tables away. But there he was — the multi-millionaire movie star seated with all the other Joes in a tiny dining facility at tiny Forward Operating Base Connor, deep inside Bosnia.

"They said he was going to be here 40 minutes, sign maybe five or six autographs and go," said Miller, a National Guardsman with the 2nd Battalion, 198th Regiment of the 155th Armored Brigade out of Tupelo, Miss. Instead, the action-adventure, mega-star was an hour into his visit Saturday — nearly six hours into a tour of three American SFOR bases — and showing no sign of being in any particular hurry.

When he finally rose to leave, Schwarzenegger walked out to the cheers of men and women lining the porch rails of the base exchange, shaking hands as he strolled back to his caravan of three Black Hawk helicopters. As he rounded the corner and stepped into the night, Schwarzenegger suddenly reversed course like he’d forgotten something and walked back into the light.

The line from his blockbuster "The Terminator" has become a popular catch phrase around the globe. It was that kind of a sound-bite and video day.

Arnold, posing with soldiers at FOB Connor, a quizzical smile appearing when a wise guy poses Muhammed Ali-style, a threatening fist at his stone-solid chin.

Arnold, telling politically incorrect jokes at the jam-packed fest tent at Eagle Base, knowing he was among friends.

The 3,000 or so American troops — mostly National Guard troops and Reservist — assigned to the Stabilization Force in Bosnia haven’t been exactly deprived of entertainment. Rock groups and cheerleaders pass through. The Harlem Globetrotters are scheduled to visit this month. "Band of Brothers" author Stephen Ambrose came in December.

But Arnold "is the first ‘Oh, my God!’ star we’ve gotten" at McGovern, said Sgt. Christopher Ketterlinus of the 2nd Battalion, 22nd Regiment, 10th Mountain Division out of Ft. Drum, New York. Soldier after soldier ranked him as their favorite of the action-hero triumvirate of Schwarzenegger, Sylvester Stallone and Bruce Willis.

"There’s no doubt about it," said Sgt. Anthony Martin, with the 181st Field Artillery at McGovern. Martin said with finality. "He’s No. 1!"

The erstwhile reason for his visit to Bosnia was to promote his new movie, "Collateral Damage." But Schwarzenegger only mentioned the movie briefly before its screening Saturday night. The star appeared on stage at Eagle Base’s theater/fest tent with Army Maj. Gen. H. Steven Blum, commander of Multi-National Division North.

Earlier at FOB Connor, Schwarzenegger launched into what seemed like an old-fashioned stump speech, stating that he came to the United States from Austria "looking for opportunities to make it, to get rich and famous. And also to become a good human being."

No American, "not Bill Gates, not any kind of business leader — or religious leader — no one could be successful if it wasn’t for you all who protect the U.S," he said.

Schwarzenegger finished by vowing to tell the political elite that they need to give the military the budget it needs: "I play an action hero. You ARE the action heroes."

At which point, one specialist turned to a captain and asked: "Hey, sir, is he runnin’ for somethin’?’"

Whatever his reasons for flying in, Schwarzenegger arrived with quite a posse. There was a military general, film crews, still photographers, publicists, a producer, and officials from Morale, Welfare and Recreation and United Service Organizations. They filled three Black Hawks, moving from Eagle Base near Tuzla to Camp McGovern, outside Brcko, then 80 miles south to FOB Connor inside the Republika Srpska.

On the military side, Sgt. Wayne Brenize headed the security team for the man he admired not as a movie star, but as "the godfather of bodybuilding."

Indeed, Brenize said, his group of eight MPs — Schwarzenegger’s round-the-clock security team — was chosen from the 372nd Military Police, 99th Regional Support Command, precisely because they’re body builders. "We’re in the gym all the time," the 31-year-old said. "That’s why we got picked."

They needed the bulk because it seemed all 408 people at Camp McGovern turned out, and no one wanted to leave. A few of the soldiers seemed mildly annoyed that at 6-feet-1 inches, Schwarzenegger was somewhat smaller than his 20-foot tall image on multiplex screens.

But far more thought Schwarzenegger was still "The Man." "His chest is the size of my head!" said Spec. Maurice Clay, 21, part of Schwarzenegger’s 372nd MP security detachment. Posing with a signed photo of a young muscle-bound Schwarzenegger, Sgt. Thomas Maycock of Headquarters, Headquarters Co., 2nd Battalion, 22nd Regiment of the 10th Mountain, could only smile. For him, the visit "was like Christmas! Like Christmas and all the other days together."