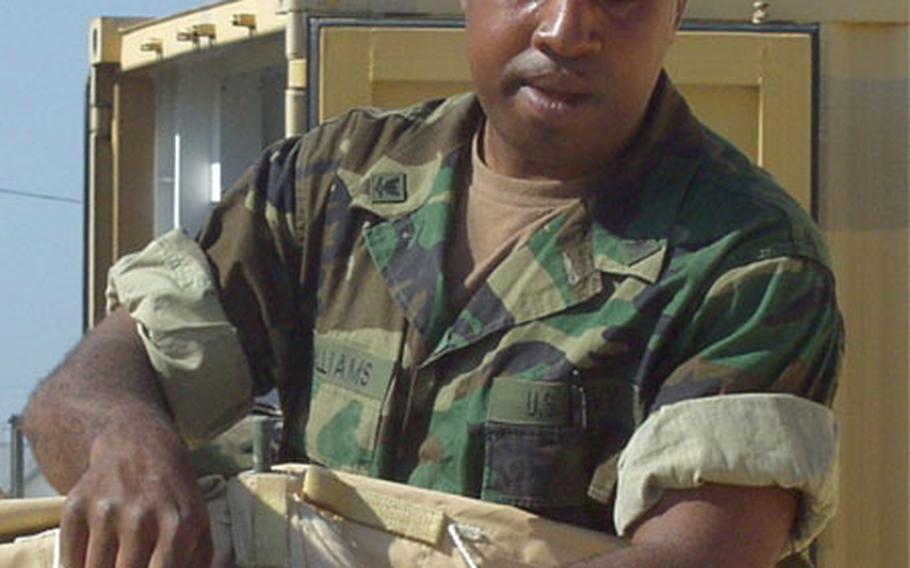 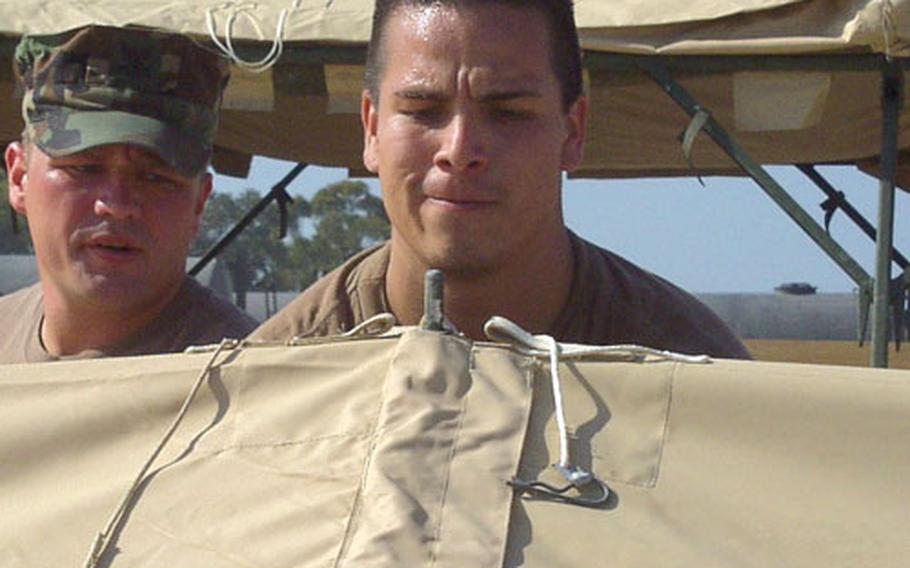 NAVAL STATION ROTA, Spain &#8212; A Navy tent hospital set up in southern Spain to treat war casualties from Iraq has slashed the number of beds by more than half and is sending some people home.

The first group of doctors, hospital corpsmen and cooks from Fleet Hospital Eight will leave Rota on Tuesday.

The tent hospital has gone from 250 hospital beds to 100 in the past week. The unit tore down its initial 116-bed hospital about two weeks ago.

Capt. Pat Kelly, the hospital&#8217;s commanding officer, said Friday that although the hospital is getting smaller, the Pentagon has not determined when the rest of the unit will leave.

The number of combat casualties dropped off considerably during the past several weeks as heavy fighting in Iraq decreased.

Last week, several tents and a galley that served as many as 600 meals to patients and hospital staff were torn down. Two dozen of the galley&#8217;s mess specialists will leave next week after spending about two months in Spain.

Petty Officer 2nd Class Lemuel Manlogon, one of the sailors leaving Rota after arriving in March, said everyone is glad to be going home. He expected the war to last much longer.

The fleet hospital is comprised mostly of medical personnel and Navy Seabees from Bremerton, Wash., and San Diego. However, 19 different U.S.-based commands contributed personnel to the unit.

The bulk of the people arrived in Rota from the United States in February and set up a small hospital on a field about a block from the base&#8217;s air terminal. In March, additional personnel arrived to move the unit to the larger tent facility that could expand to treat as many as 500 patients.

In Europe, the Rota facility along with the U.S. military hospital in Landstuhl, Germany, treated casualties from the war.

In three months, the Rota hospital treated more than 600 patients, Kelly said. Of those, 142 were surgical cases.

Sixty-three patients arrived at the hospital last Thursday, and hospital officials expect to see a steady amount of wounded soldiers as long as there are tens of thousands of troops in the Persian Gulf region.

While the typical battlefield-type injuries &#8212; shrapnel and gunshot wounds &#8212; have decreased, other types are on the rise. Doctors are now treating mostly sports-related injuries or personnel hurt in automobile accidents.

While many of the battle injuries doctors and nurses treated during the war were expected, some were surprised by the ages of some patients.

&#8220;One of the things was that there were a lot more older people out there in Central Command than we anticipated,&#8221; Kelly said. &#8220;There are a number of people from the selected Reserves. There are a number of people who are [Department of Defense] contractors, DOD civilians who are out there. It&#8217;s not all 19- and 20-year-old Marines and Army guys.&#8221;

The older patients presented doctors with a set of challenges not usually seen during war. Some came in with heart problems and took much longer to heal than a younger soldier.

Doctors also have seen a higher number than expected of orthopedic cases. About 80 percent of the surgical cases involved injuries to limbs.

&#8220;The Kevlar body armor and helmets have just remarkably and dramatically reduced those types of injuries,&#8221; Kelly said.

NAVAL STATION ROTA, Spain &#8212; What do you do with nearly 6 tons of underwear?

That is just one of the quirky dilemmas Navy doctors and medical personnel in Rota face as major combat operations in Iraq and the number of war wounded dwindle.

They do not know what to do with the mounds of underwear, toiletries and sweat pants donated by concerned citizens and corporations to injured troops at the tent hospital.

Since late March, people worldwide have responded to reports that many of the injured U.S. troops arrived from the front with little more than a hospital gown.

Walmart answered by donating the truckload of underwear. Others donated everything from Snapple to deodorant.

But now that the heavy fighting is over, the hospital is stuck with a lot of donated stuff, including the surplus briefs.

The hospital was set up prior to the war in Iraq to treat casualties. Last week, it reduced the number of patient beds from 250 to 100 and sent some personnel back to the States.

But the donations keep coming.

The hospital in Rota may send some items to troops who need it in Iraq. Commanders are also looking at possibly donating it to needy people in southern Spain, but rules on dishing out donations overseas could make it difficult.