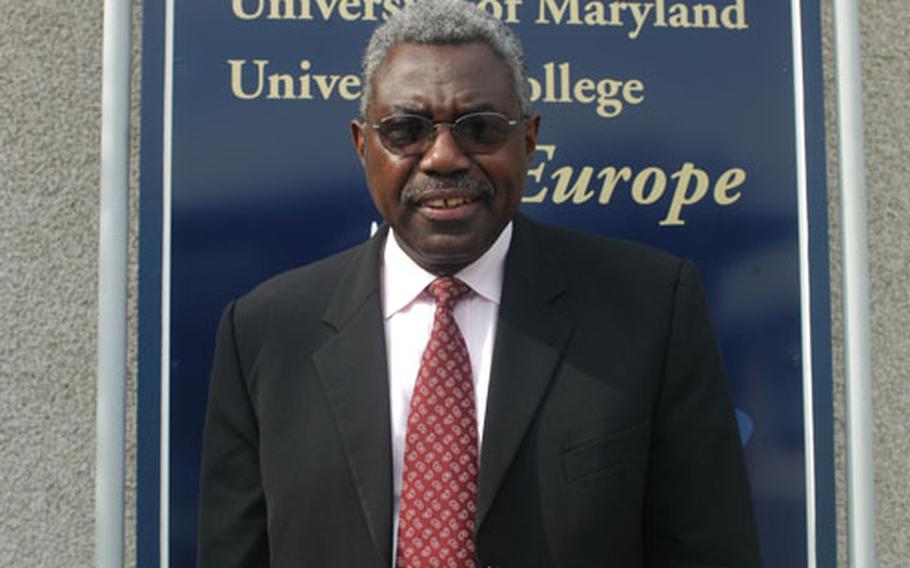 Robert Scott, University of Maryland University College Europe director for central Germany for the past five years and a 18-year UMUC veteran. His termination with UMUC has raised questions with a local civil rights group. (Nancy Montgomery / S&S)

HEIDELBERG, Germany &#8212; An institution that for 60 years had provided soldiers with education and career enhancement is undergoing a staff shake-up that is leaving many of its longtime educators unceremoniously unemployed.

The University of Maryland University College Europe began its downsizing earlier this month after four of its senior staff &#8212; some worked for the university for decades and all hold advanced degrees &#8212; were told in December their positions were being eliminated.

Each of the four applied for fewer, newly created positions and were rejected, then told they would be allowed to teach until the end of July and that no severance pay would be provided.

On Thursday, scores of staffers in a variety of departments at UMUC headquarters &#8212; logistics, student affairs and administrative and clerical jobs &#8212; were given termination notices and told that they could apply for 27 remaining positions, according to two staffers. The staff&#8217;s first notice of changes was a March 5 memo that offices and positions were to be &#8220;strategically combined.&#8221;

&#8220;I don&#8217;t know that I dispute there needed to be a reduction,&#8221; said Elizabeth Trousdell, 54, who for the past nine years was one of three area directors overseeing faculty and programs in the three European regions and is one of the senior staff facing unemployment. &#8220;The manner in which it&#8217;s being done, I think, clearly gives pause.&#8221;

The abrupt moves have brought up questions of equity and oversight in an institution that collects tuition for college courses from some 45,000 military members, soldiers and family members in Europe, Asia and the Middle East.

UMUC Europe&#8217;s director, Allan Berg, who was instrumental in the decisions, declined to comment, referring questions to a university spokesman in Maryland.

Spokesman Jim Hambright said that the university was reorganizing and reassessing as the number of U.S. armed forces in Europe dwindled through transformation and online courses became more numerous.

&#8220;It&#8217;s just a general reassessment that any business would do,&#8221; Hambright said. &#8220;People who are embedded don&#8217;t always add value and can be resistant to change,&#8221; he added, saying he was speaking generally. Hambright said the university needed flexibility and that leaders did not intend to be inhumane.

The senior staff reduction has left two assistant deans in charge of an operation that used to be handled by six academic directors. It also changed directors of European regions into directors of the individual services (Army, Navy, Air Force), resulting in the loss of another position. More changes are to come, and employees anxiously await their fate.

Among the positions cut Thursday were the professional librarian, one worker said, which is not to be replaced.

Unlike professors at four-year colleges and universities in the States, most UMUC professors as well as staffers don&#8217;t have tenure or other guarantees of continued employment. Scott said he was never given a performance review.

Scott, the only African-American on the senior staff and, he said, one of eight African-Americans among more than 500 UMUC Europe faculty, contacted the local branch of the National Association for the Advancement of Colored People for support.

He said he&#8217;s not accusing anyone of racism but that the university has been slow to hire blacks and that his absence will send a discouraging message to black students and faculty.

Scott said the tension in his UMUC headquarters building was palpable.