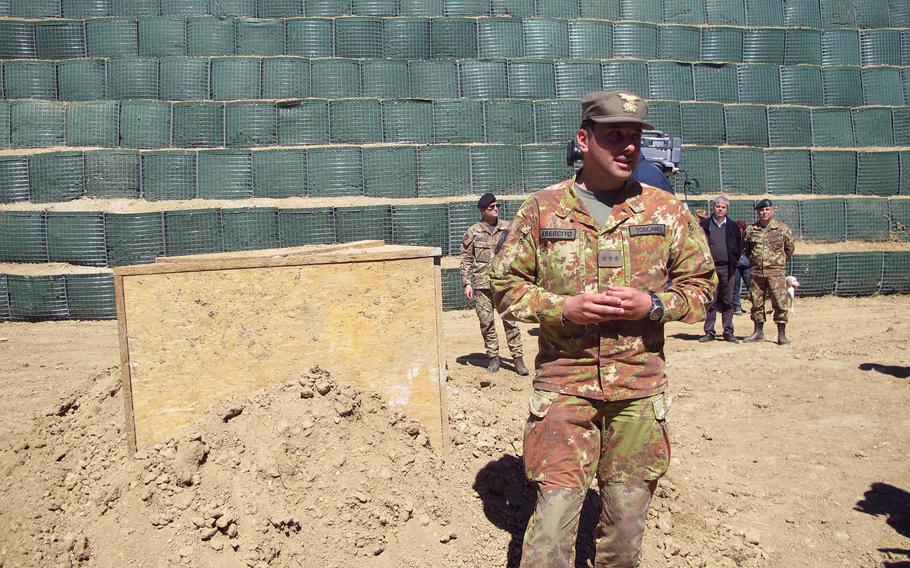 A World War II-era, 4,000-pound bomb was discovered by explosives experts surveying a field in October. It is the largest of some 133 bombs found in the area, and has been under constant police guard since then, covered with a wooden box and surrounded by monumental Hesco barriers. (Nancy Montgomery/Stars and Stripes)

A World War II-era, 4,000-pound bomb was discovered by explosives experts surveying a field in October. It is the largest of some 133 bombs found in the area, and has been under constant police guard since then, covered with a wooden box and surrounded by monumental Hesco barriers. (Nancy Montgomery/Stars and Stripes) 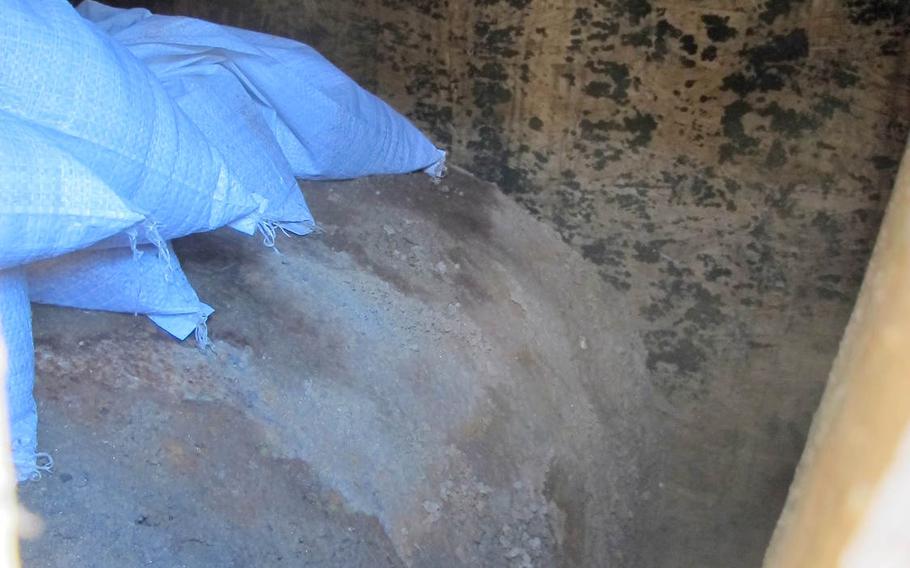 This 4,000-pound "Blockbuster" bomb dropped by the British Royal Air Force on Vicenza in 1944 is to be defused, disarmed and hauled away to a nearby cave by Italian combat engineers on April 25. (Nancy Montgomery/Stars and Stripes) 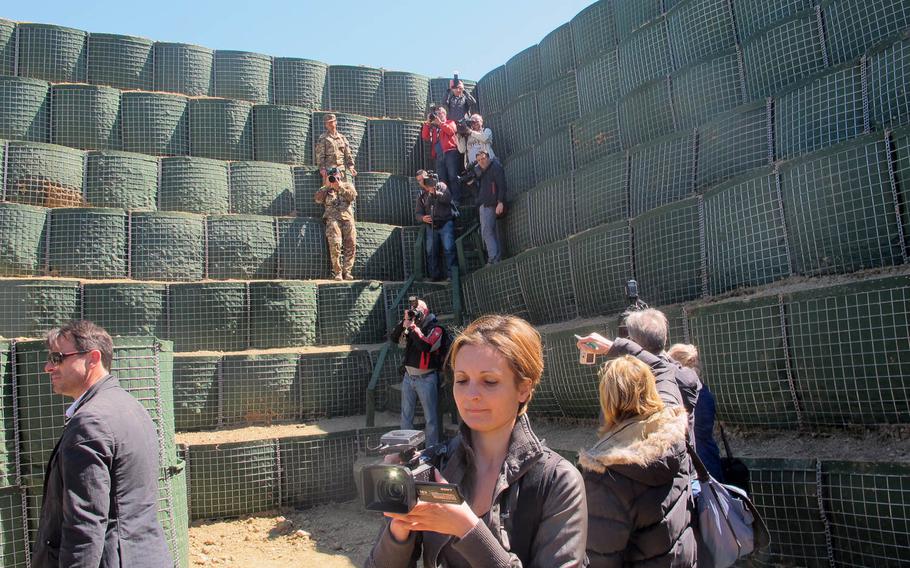 Media were invited to visit the site of a huge World War II-era bomb on April 16, 2014, and briefed on plans for defusing and removing it. (Nancy Montgomery/Stars and Stripes) 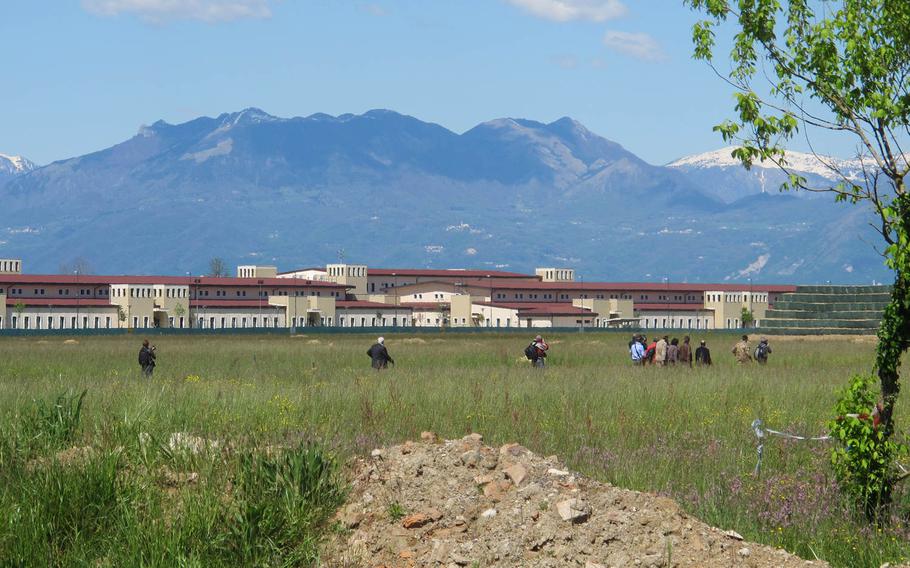 Italian journalists trek out to the site where a giant World War II-era bomb was found in a field next to the U.S. Army's Del Din base. It is to be defused and removed on April 25, 2014. (Nancy Montgomery/Stars and Stripes)

VICENZA, Italy — Tens of thousands of city residents and U.S. Army soldiers here will evacuate their homes, offices and barracks Friday as military explosives experts, seasoned by duty in Afghanistan, attempt to disarm a gargantuan bomb that was among thousands dropped during a single Allied mission 70 years ago.

The 4,000-pound British “Blockbuster” bomb rests in what’s now a field adjacent to the U.S. Army’s Del Din base, formerly Dal Molin airport, which, in 1944, was controlled by the German air force and Benito Mussolini’s Italian Republican National Air Force.

Since its discovery in October, the bomb has been under constant police guard. Over the past six months, the Italian army has built five huge blast walls made of soil and green Hesco barriers.

Explosives experts from the 2nd Regiment of the Julia Alpine Engineers, veterans of many Afghanistan deployments, were enthused about the job.

“One as big as this, we’ve never done before,” said Lt. Giovanni Contini. “It’s a challenge for us.”

The most dangerous part will be removing the bomb’s three fuses, the engineers said. If that’s not possible, the plan is to shoot hot water at high pressure into the bomb to “melt” the explosives before hauling it away to a cave.

They’ve named their mission, out of respect, they said, for its British origin and age, Operation Old Lady.

Local officials were looking forward to getting the bomb out of the ground and away, despite the cost — about $2 million — and disruption — a daylong evacuation of the 30,000 or so residents within about two miles of the site.

“We have to do it,” said Vicenza Prefect Eugenio Solda.

Del Din, home to the 173rd Infantry Brigade Combat Team, is to be evacuated by 6 a.m., except for emergency crews, and most of its soldiers will get the day off. Army officials planned trips and a variety of activities.

That confidence is widely shared.

“This is my third bomb,” Solda said. “Usually, everything goes as planned.”

The bomb is by far the biggest of 133 found by experts in the area, which is to be developed as a “peace park” to placate Vicenza citizens who opposed the creation of Del Din.

“It was a sort of devil house that night,” said the 2nd Regiment’s Lt. Col. Mauro Altieri. The British Royal Air Force bombed at night; U.S. bombers followed by day.

Dal Molin and Aviano were among four airports targeted that night, according to “Bf 109 Aces of North Africa and the Mediterranean,” a book about Axis fighter pilots. Strategic bombing, in which non-military targets are hit, was used extensively by the Allies in World War II, including in Italy, even after it switched to the Allied side in 1943.

“Since German forces were in occupation, northern and central Italy remained a target for allied bombing until the very last days of the war,” British historian Richard Overy writes in his new book, “The Bombers and the Bombed: Allied Air War Over Europe 1940-1945.”

“Throughout the campaign, the political necessity of defeating Germany overrode any political considerations toward the population held hostage on the battlefield,” Overy writes. By his account, some 60,000 Italian civilians were killed by bombs, either because, as often happened, the bombs missed their target, or because population centers were targeted.

Blockbuster bombs, used only by the British Royal Air Force, were basically huge cylinders full of explosives, designed for their blast effect to cause damage to buildings. In particular, they were supposed to blow off roofs so incendiary bombs could reach the building interiors.

The British believed bombing Italian civilians would cause them to revolt against their Fascist government and their German colleagues-turned-occupiers, Overy writes. The bomber pilots and crews were themselves at great risk of death, Overy writes, either from enemy defenses or, more often, accidents, bad weather or mechanical failure.

Another 4,000-pound unexploded Blockbuster — found in Vicenza’s city cemetery in 2001 — dated from the same November 1944 bombing raid as the one now near Del Din, according to local military historian Giuseppi Versolato. Some 500 Vicenza citizens were killed in the Allied bombings, he said.

Removal of the cemetery bomb required the evacuation of two-thirds of the city, or 77,000 people.

April 25 happens to be Liberation Day. That’s Italy’s national holiday commemorating the day in 1945 when Italian partisans seized power from Mussolini’s fascist government in the north, a puppet regime of Nazi Germany, marking the end of the war for Italy.

“Many people still remember,” Vicenza Mayor Achille Variati said of Italy’s suffering in World War II, although he said the subject had only recently been introduced in schools.

But if the evacuation for the bomb removal brings up bitter memories, it also provides opportunity, he said, to train for emergencies and practice public safety measures, and as a reminder “of the great value peace brings.”