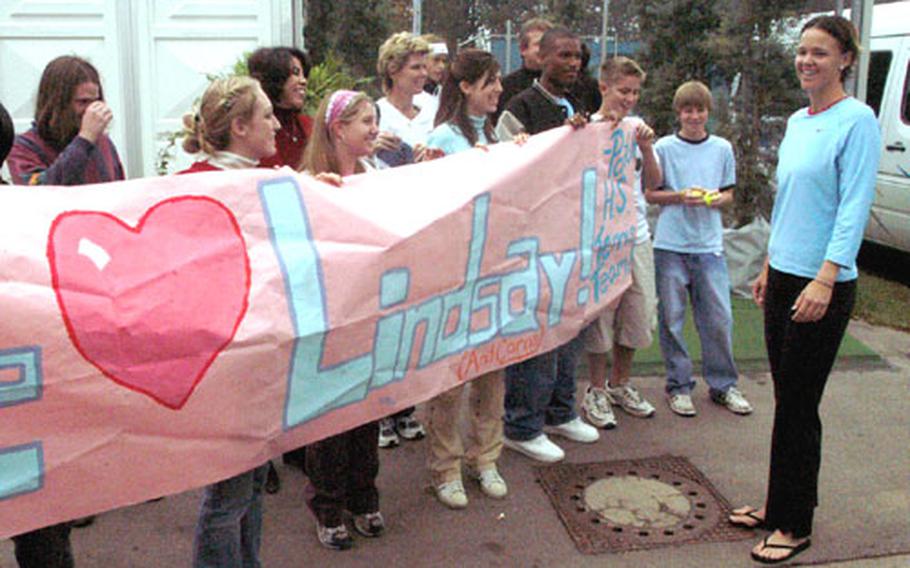 Lindsay Davenport, right, currently ranked No. 2 in the world in women&#39;s tennis, is greeted Wednesday by members of the Patch American High School tennis team after her match in the Porsche Tennis Grand Prix in Filderstadt, near Stuttgart. (Charlie Coon)

Lindsay Davenport, right, currently ranked No. 2 in the world in women&#39;s tennis, is greeted Wednesday by members of the Patch American High School tennis team after her match in the Porsche Tennis Grand Prix in Filderstadt, near Stuttgart. (Charlie Coon) 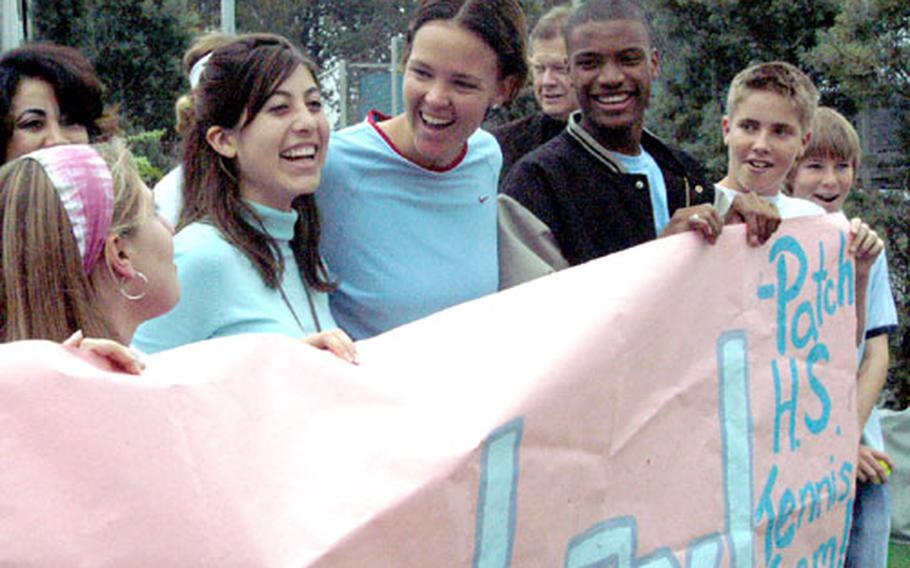 Lindsay Davenport, center, poses with some of her fans from Patch American High School. (Charlie Coon)

FILDERSTADT, Germany &#8212; It helps to have friends in high places, and the Patch High School tennis team has one in Lindsay Davenport.

Davenport, currently the No. 2-ranked player in the world, treated the Patch players Wednesday to a day of tennis as the WTA Tour came to Stuttgart.

After she defeated Italian Francesca Schiavone, 6-2, 6-2, in the second round, Davenport was greeted by the Patch players as she made her way to the press tent for the post-match interview.

Davenport, winner of 49 career singles titles including three of the four majors &#8212; the U.S. Open, Australian Open and Wimbledon &#8212; is defending champion at the Stuttgart tournament, called the Porsche Tennis Grand Prix. A victory this week would lift her back into the No. 1 spot, which she held earlier this year.

Over the years, he has also helped bring tennis stars Steffi Graf, Andre Agassi, and Venus and Serena Williams to the school, located on Patch Barracks.

Davenport, who last year hit balls with the team and addressed the school at an assembly, was trying to round up some more tickets for Friday&#8217;s matches.

The Patch players marveled at how a world-famous sports star with nearly $21 million in career earnings, as well as the other pros they&#8217;ve met, were so down to earth. Davenport signed autographs and chatted with all of them before stepping into her press conference.

Some of the high-school players looked to the pros for tips. Hank Anderson, a 17-year-old senior, said he watched to learn techniques such as hitting forehands and backhands and keeping a straight wrist.

Michelle Whitbeck, a 16-year- old junior, had her eye on strategy.

And while watching tennis on TV has its usefulness, according to Joey Pirosko, a 16-year-old junior, it doesn&#8217;t tell the whole story.