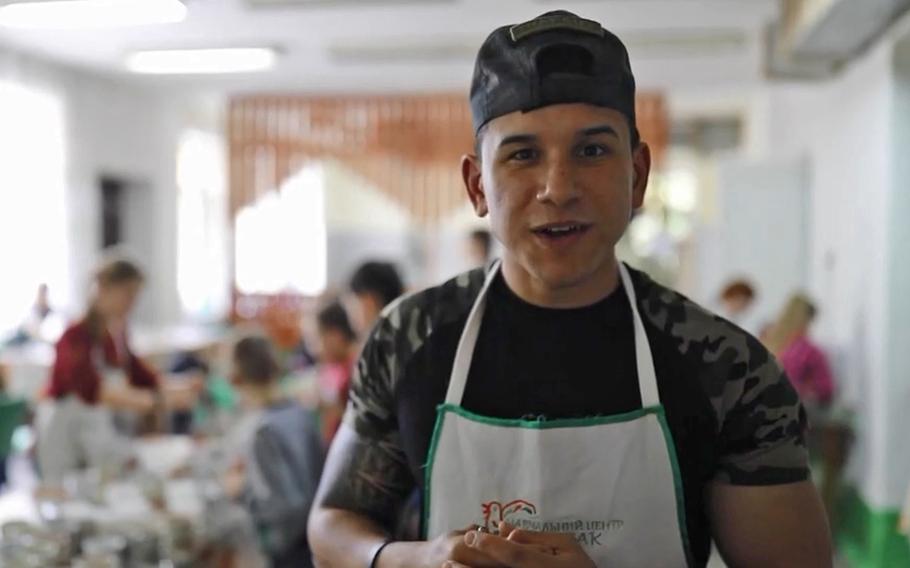 But after busy days teaching Ukrainian noncommissioned officers in skills like NCO leadership and better use of artillery, about a dozen of the Guardsmen volunteer once a week to go off-post to a local school and speak to students in English.

“The kids and teachers really enjoy us participating in this project, and they always welcome us with open arms,” said Spc. Justin Smith. “I started teaching English in Ukraine by simply volunteering. Some soldiers spoke about a chance to visit a local school to teach English to children and I instantly jumped on the opportunity.”

A Ukrainian military chaplain first invited U.S. soldiers to teach conversational English at the school back in 2015, when the U.S. Embassy in Ukraine was helping renovate the school.

The students there range in age from 7 to 16. Few of the soldiers know any Ukrainian, so the classes are taught entirely in English.

“I find it so interesting how fast they can learn English at such a young age, while speaking their native language at the same time,” Smith said.

Teachers will outline a lesson plan or give the soldiers something to talk about, and then the soldiers spend the rest of the class talking with the children about the topic. That is, unless they get distracted.

“Usually we get side tracked and talk about hobbies or interests,” Smith said. “Overall, the children ask a lot of questions and are very interested when we come to visit.”

The U.S. command is fully supportive of the volunteer effort, which is viewed as further building relations with Ukraine and strengthening the two countries’ partnership.

“Our main priority here is to assist and mentor the Ukrainian instructors,” said Lt. Kealy Moriarty, a spokesman for the regiment. “Along with that, we are very much involved in outreach projects as part of building relations with the local community.”

These opportunities have also given the soldiers a chance to learn more about Ukrainian culture and foster friendships with the local community, Smith said.

For instance, the soldiers learned about traditional Ukrainian holidays, Ukrainian foods and what games little kids play over there.

“I like the kids. They are so smart and teach me the importance of embracing other cultures,” Smith said.

“We all learn from one another, and I guarantee if anyone had the opportunity to sit down with these kids and just have a simple conversation, they would really appreciate the Ukrainian culture.”