Tenjin off limits at night after 7 assaulted 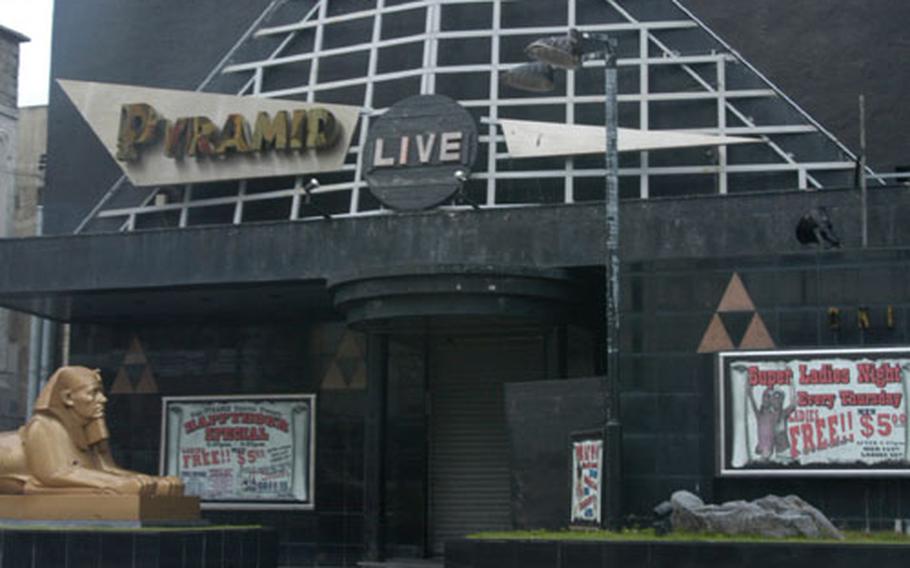 Club Pyramid in the Ueichi district of Okinawa City is one of three clubs placed off limits as of Friday for all SOFA status personnel on Okinawa. The other clubs on the prohibited list are Disco Else and Club Manhattan, which are in the same vicinity as Club Pyramid. (Mark Rankin / S&S)

Sasebo and Iwakuni Marine Corps Air Station commanding officers issued orders that took effect Wednesday at 4:30 p.m. They prohibit anyone in the two military communities covered by the U.S.-Japanese Status of Forces Agreement, including spouses and civilian base employees, from entering the area between 8 p.m. and 6 a.m.

The Sasebo &#8220;Emergency Off-Limits Order&#8221; by Capt. Michael James, commanding officer, said the servicemembers were attacked by &#8220;a gang of approximately 30 Japanese males armed with baseball bats and metal pipes.&#8221; His order also applies to &#8220;all SOFA-sponsored personnel on the Island of Kyushu,&#8221; even those visiting the area, base officials said. It&#8217;s in effect for 30 days.

The off-limits order from Col. David Darrah, Iwakuni&#8217;s base commander, applies until &#8220;further review after the incident investigation is complete,&#8221; Capt. Stewart Upton, a base spokesman, said Wednesday.

The order, Upton said, reflects the &#8220;decision made by the base commander after thoughtful consideration for the health and welfare of servicemembers.&#8221;

The seven servicemembers, all stationed in Iwakuni, were attacked by the Japanese men Sunday between 3:30 a.m. and 5 a.m., Upton said.

He said the condition of the three hospitalized servicemembers was unknown early Wednesday evening, although one of the three reportedly had &#8220;serious injuries&#8221; when admitted.

However, he declined to discuss what might have prompted the incident, saying, &#8220;It would not be proper to speculate as to the cause of, or what provoked the incident, while it is still under investigation.&#8221; The Navy Criminal Investigative Service is conducting an investigation in conjunction with Fukuoka law enforcement personnel, whose cooperation and help &#8220;we sincerely appreciate,&#8221; he said.

A Chuo police spokesman in Fukuoka confirmed the incident but provided different details. He said one American was hospitalized after 20 Japanese men attacked five servicemembers. The spokesman didn&#8217;t know details of the injury or the servicemember&#8217;s condition.

He said local police responded to a phone call about the altercation but when they arrived, all the attackers were gone. No arrests have been made.

Upton said the ranks, names and unit assignments of the seven servicemembers were not released because the families are still being contacted.

Asked if Sunday&#8217;s attack was the sole reason for the Iwakuni off-limits order, Upton cited &#8220;recent incidents.&#8221; Further details will be released only after pending investigations of such incidents are complete, he said.

Sailors in Sasebo learned of the off-limits order Wednesday evening. Some weren&#8217;t complaining.

Echoing Stuart was Petty Officer 3rd Class Alfred T. O&#8217;Donnell, who said, &#8220;You can be sure if they go to the extent of securing a location to restrict us from the area, then there&#8217;s a good reason; they are looking out for us.

After the attack, two bloodied servicemembers tried to engage a taxi to find a hospital, but the driver misinterpreted their actions, denied them entry and reported the incident to police as a robbery attempt, the Chuo police spokesman said. Police rectified the misunderstanding.

The police spokesman added that there have been minor incidents in Tenjin when &#8220;servicemembers became drunk and caused trouble but nothing like this, where they were in a quarrel with 20 people.&#8221;