Teeth to get the high-tech treatment at Walker clinic 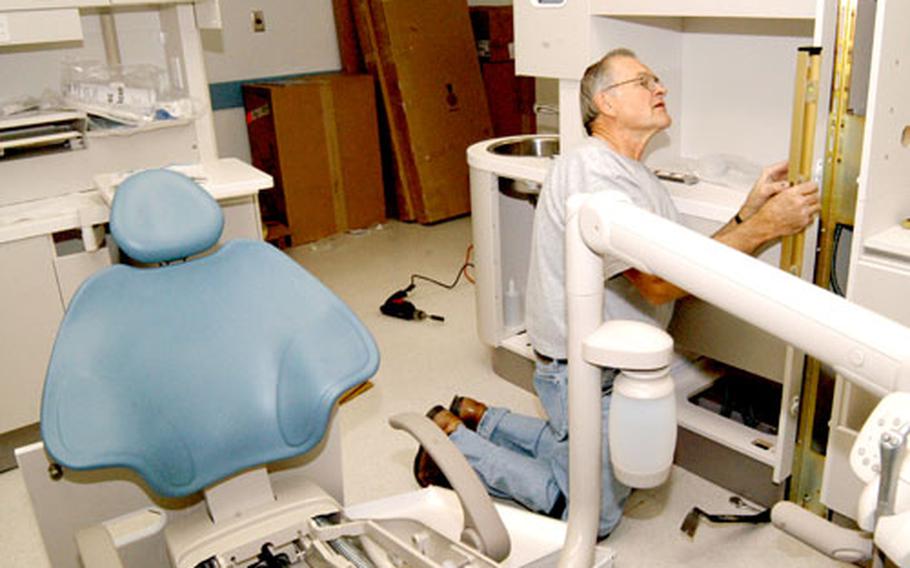 At Camp Walker Dental Clinic in Daegu, South Korea, in November, Ron Gaumer, a contractor with Austin Dental Equipment Company, checks the alignment of newly installed cabinets during the final phase of the clinic’s $2.3 million renovation, which began in December 2004. A dental treatment chair in the foreground awaits assembly. (Galen Putnam / U.S. Army)

The facility will be called the Bodine Dental Clinic and will open with a formal ceremony Jan. 6, said Capt. Paul Graves, executive officer of the Army&#8217;s 618th Dental Company, part of the 18th Medical Command.

The $2.3 million renovation began last December across from the Wood Medical Clinic. The single-story structure was built in 1959 and measured 4,800 square feet.

The renovation expands the clinic to 8,000 square feet and adds two dental chairs, bringing the number of chairs to 12. It will have a more spacious reception/waiting area and the most modern equipment, Graves said.

Improvements include a digital X-ray system that will speed the process of getting X-rays taken and reviewed by a doctor, Graves said. And each treatment room will eventually have its own attached X-ray room, he said.

And if X-rays need to be sent to another clinic or hospital, that can be done with the speed of the Internet, he said.

The new clinic will have its own lab for making crowns, bridges and other dental devices, Graves said. In the past, the clinic could make only a limited number of such items; the others had to be shipped from Army dental labs at Yongsan Garrison in Seoul and Fort Gordon, Ga. But more such items now can be done in-house, Graves said.

To provide dental service during the renovation period, the Army in January set up a five-chair interim clinic inside the Wood Clinic.

But with the Bodine Clinic set to open next month, the interim clinic closed last week, said Graves. The space it occupied will once again serve as Wood&#8217;s physical therapy clinic, he said.