Teens take on world issues at The Hague 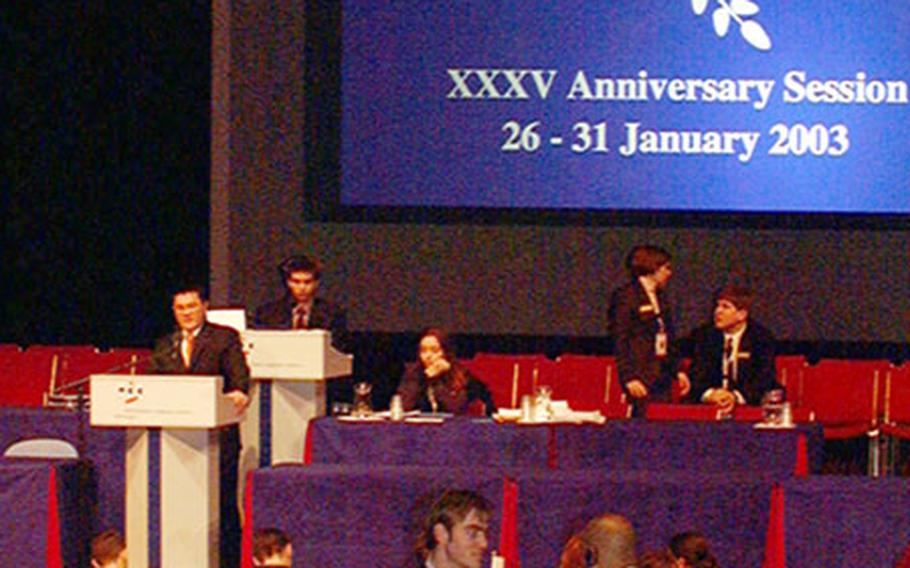 Delegates took to the stage Tuesday to make brief opening remarks at the opening session of the General Assembly for The Hague International Model United Nations. More than 3,100 high school students from 106 countries attended this week&#39;s annual conference, now in its 35th year. (Kevin Dougherty / S&S)

Delegates took to the stage Tuesday to make brief opening remarks at the opening session of the General Assembly for The Hague International Model United Nations. More than 3,100 high school students from 106 countries attended this week&#39;s annual conference, now in its 35th year. (Kevin Dougherty / S&S) 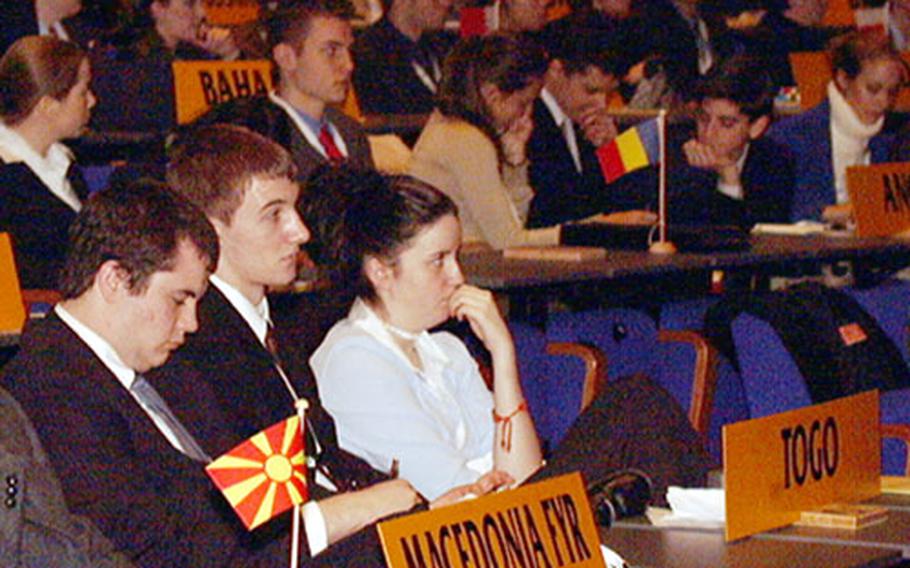 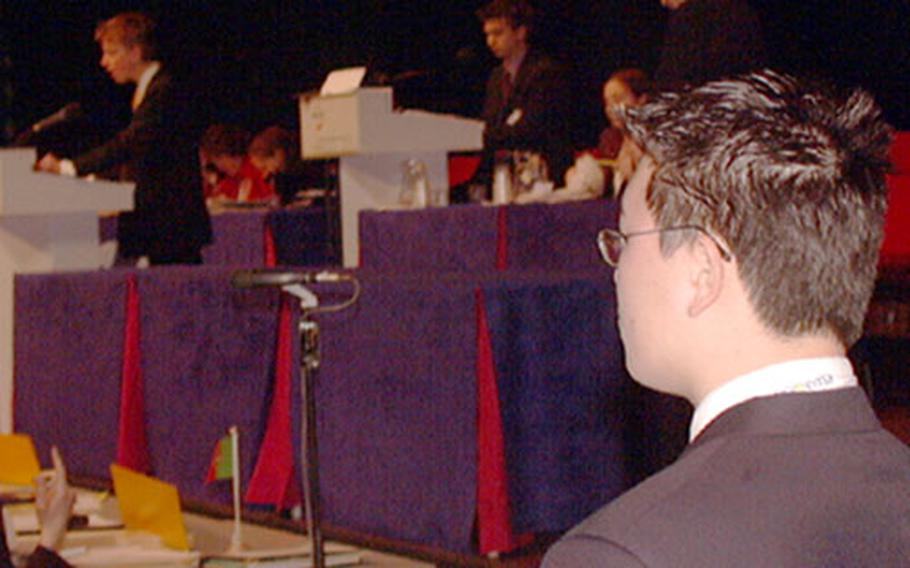 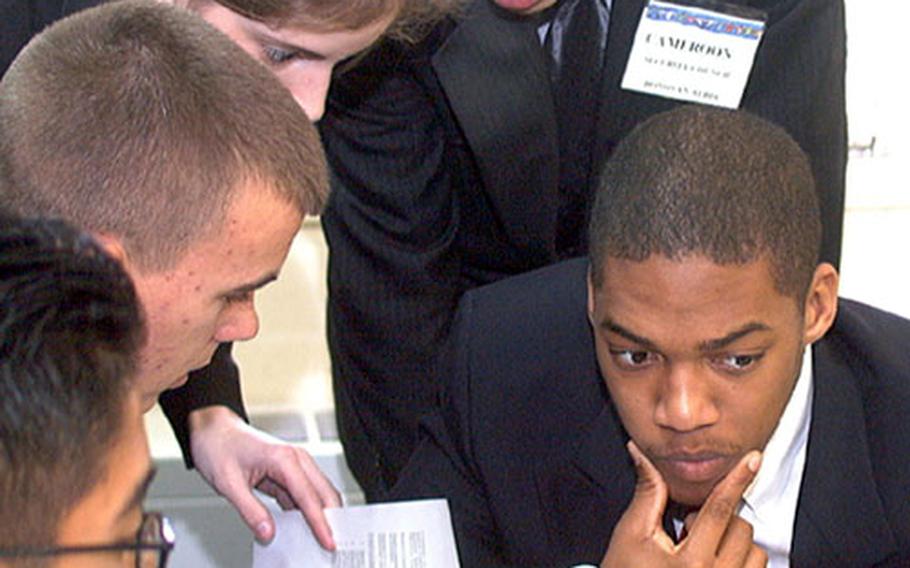 THE HAGUE, Netherlands &#8212; Amanda Kunkel represents Togo, supports human rights and seeks a worldwide ban on the death penalty for any but the most serious crimes. Quite a load for an 18-year-old.

A year from now, if all goes as planned, the senior from Alconbury American High School in England will be cramming for her midterm exams at San Jose State University in California. But this week, she&#8217;s focused on her role as the U.N. ambassador for the West African nation of Togo.

That means not being inextricably wedded to every word and clause in the death penalty resolution she intends to introduce this week at The Hague International Model United Nations.

It also means collaborating with students from others schools and from other lands in civil, yet clever, ways to forge a passable resolution.

Half the size of Tennessee, Togo isn&#8217;t even an understudy on the world stage. So Kunkel and the other pseudo-delegates representing this country of 2.7 million people rely on finesse and the power of principle to raise the curtain and make a difference.

For the past 35 years, high school students from around the world have congregated in The Hague to simulate the public and backstage haggling that often characterizes the U.N. General Assembly in New York.

More than 3,100 students from 106 countries are in attendance this week for the annual session. The Department of Defense Dependents Schools sent 243 students to The Hague to represent nearly 20 entities.

Among other things, participants are required to dress appropriately, which means formal trousers, suits, blazers and dresses. Clothing or accessories that &#8220;call attention to themselves&#8221; are prohibited, according to the general rules of conduct.

In the fall, participating schools are randomly assigned countries or official organizations, such as the International Monetary Fund. Each delegation is obligated to act in the best interest of that nation or body.

Resolutions that win approval are forwarded to the United Nations for consideration, though few if any ever move the real delegates to action.

For DODDS, some of the pairings are quite intriguing. The delegation from Ramstein High School, Germany, represents China, while nearby Mannheim High School has North Korea and London Central claims Libya.

&#8220;Sometimes you have to say things that you don&#8217;t really believe,&#8221; confessed Bob Putko, a 16-year-old student from H.H. Arnold, which wound up representing the United Kingdom.

&#8220;To get an American thinking like an Iraqi is far more than an educational exercise,&#8221; said Hanns Koehler-Kruener, a teacher and member of the board of directors that runs the conference.

Though Koehler-Kruener was speaking hypothetically, at least one American student has taken on the challenge.

Joseph Maher is a senior attending the American Community School of Athens in Greece. Its delegation had the good fortune, from an academic standpoint, of drawing Iraq.

&#8220;You have to do a lot of research to accurately portray their foreign policy,&#8221; Maher said as he and another student sat behind a small Iraqi flag and nameplate in the main assembly hall.

The need for research, whether it&#8217;s about Hungary or hunger, applies to all students.

Much of it occurs on the Internet, or in books and reports they&#8217;ve read. In some cases, students will reach out to diplomats for insight.

The delegation from Athens, for example, sat down with Thomas Miller, the U.S. ambassador to Greece, for some tips in diplomacy.

Linos, who is Greek, takes the assignment seriously, but also wants to have some fun with it.

On Tuesday, when the model general assembly convened, Linos stood up a couple of times to state a point. Sometimes she was out of order, such as when she referred to the United Kingdom as &#8220;a stooge of the United States.&#8221;

And she did just that after an outburst. It was great theatrics, though the real reason that she and two of her delegates stormed out was because they had another session to attend.