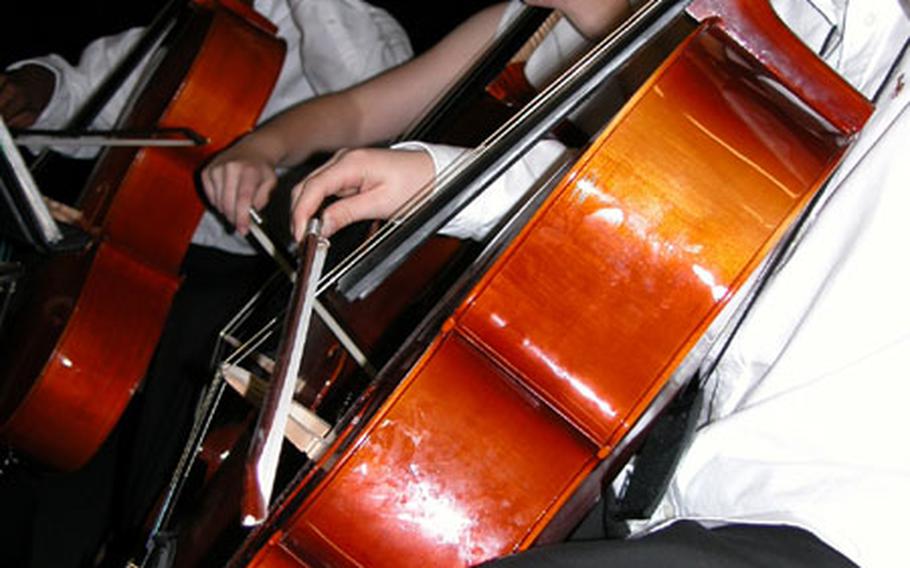 Pryor and fellow string group members toured Department of Defense Dependents Schools in England last week playing for elementary school kids. They are the only high school string ensemble in DODDS Europe, according to their teacher, Cary Sands.

The students played Monday for pupils at the RAF Croughton and RAF Alconbury elementary schools, Tuesday at RAF Lakenheath and RAF Feltwell, and Wednesday at RAF Menwith Hill.

There are 11 members of the ensemble. They play violin, viola and cello. They were joined in concert last week by London Central&#8217;s concert choir and Women&#8217;s Vocal Ensemble.

The strings kids say they&#8217;re into popular European bands such as System of a Down and Flogging Molly. They even get into old-timers such as AC/DC.

Dexter Simpson, a senior, said he sometimes feels like busting out on stage and rocking on his cello.

They play for fun. Simpson said he likes playing Christmas songs such as &#8220;Angels for the Realm of Glory.&#8221;

Sand, the music director at London Central, got the attention of the fidgety grade-schoolers at Lakenheath when he complimented them for sitting up straight with their hands on their laps.

About 100 of them sat four rows deep in the front of the school&#8217;s auditorium. Even the fighter jets roaring overhead after taking off at Lakenheath could not distract them.

Sand said he began the strings ensemble at London Central in 1996. He said he could play a wind instrument with decent results after just a few weeks of practice. Stringed instruments are a different story.

Pryor said he went to a classical concert with his parents when he was about 6. That got his attention. He took up the violin at 8.