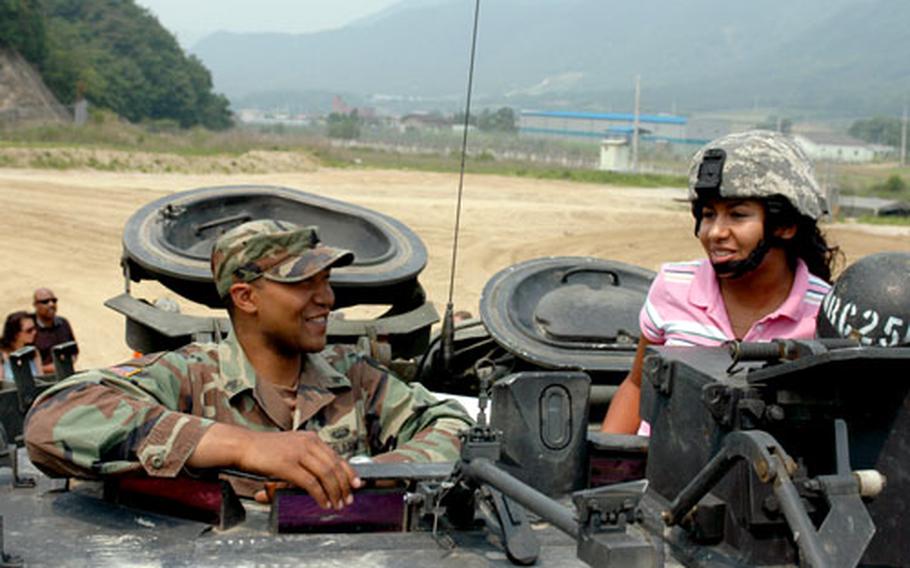 Tania Foster hands out gift certificates on May 31 to soldiers of the 2-9 sniper team. (Amanda Merfeld / U.S. Army) Tania Foster gets some weaponry instruction. Foster handed out gift certificates on May 31 to soldiers of the 2-9 sniper team. (Amanda Merfeld / U.S. Army)

CAMP RED CLOUD, South Korea &#8212; Juggling full-time school with a part-time job while running a nonprofit organization is a tall order for anyone.

Foster is the force behind Dallas is Love, a charity dedicated to supporting troops serving in South Korea. Since its inception, Foster has raised enough money to distribute hundreds of $25 gift certificates to servicemembers. She also has distributed corporate gifts and Dallas Cowboys merchandise, some of it signed by active supporter and former Cowboys standout Tony Hill.

Foster and her family toured South Korea during the past two weeks, getting the opportunity to visit both Rodriguez Range and the Demilitarized Zone during her stay. Her dedication has earned ample appreciation from servicemembers, said Army Staff Sgt. Allen Cottone.

Foster&#8217;s interest in troops in South Korea starts with her family. Her father is a Vietnam veteran and former Army Lt. Col. Patrick Foster and her mother&#8217;s family is Korean.

Foster&#8217;s commitment doesn&#8217;t surprise her mother, Linda Foster. Tania always went along as a child when her father did community volunteer work. She also has helped out with a canned-food drive for the past six years and helps with a fire department toy drive, Linda Foster said.

Meanwhile, Tania already has secured a full scholarship to the University of Texas-Dallas and holds a part-time job.

Before leaving for Seoul, Tania spent a 12-hour day pounding the pavement in Dallas trying to raise money to improve morale for servicemembers.

When she was 16, Foster wrote to family and friends for guidance on how she could help. She then met with a vice president at then-Hibernia Bank who helped her organize a plan.

It hasn&#8217;t always been easy; the teenager says she is having some difficulty establishing her organization as a registered 501(c)3 nonprofit corporation, which is hurting contributions. She hopes to resolve those difficulties soon.

In the meantime, servicemembers are very appreciative of her efforts, said Capt. Terrance Houston.