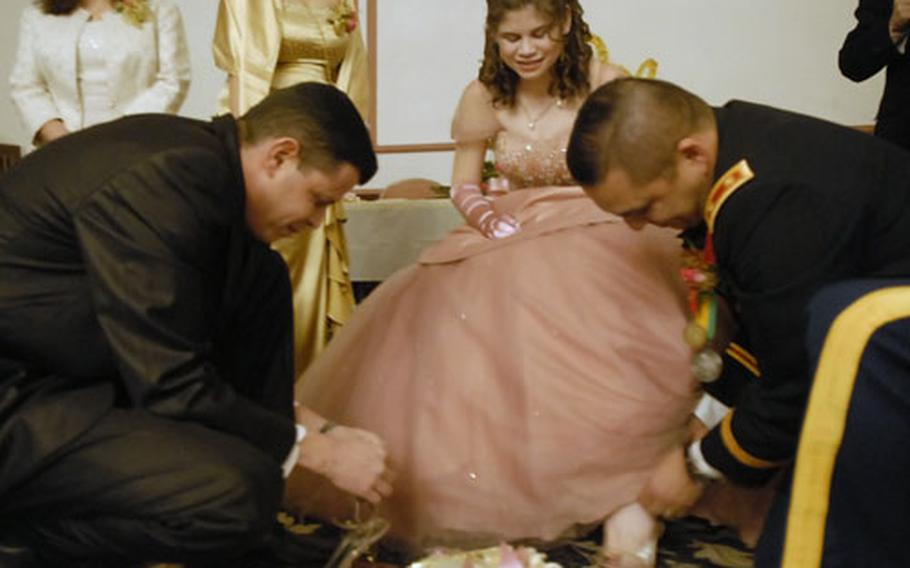 Raul Sanchez, left, and Army Maj. Neftali Santiago, right, help their daughter, Ashley Sanchez, put on her high heels, which symbolically marks her transition from a girl to a young lady at her "quinceañera," a traditional Latino 15th birthday party for girls. (Charlie Reed / S&S)

The elaborate Saturday night celebration, known in the Latino community as a quinceanera, drew 200 guests. There were costume changes, choreographed dances, a mariachi band, extravagant gifts and even a &#8220;court&#8221; of her friends with whom she danced the night away.

But it would not have meant as much if her stepdad, Army Maj. Neftali Santiago, had not been there, too. Luckily, Santiago, who is deployed with the 12th Combat Aviation Brigade Logistics Support Team out of Katterbach, made it back from Iraq for the party.

Though Ashley&#8217;s birthday was in August, the family organized the party around Santiago&#8217;s expected leave. For Ashley, it was worth the wait.

&#8220;It wouldn&#8217;t have been the same without him,&#8221; said Ashley, whom Santiago has helped raise since she was 5. Ashley&#8217;s dad, Raul Sanchez, who is a civilian engineer at Ramstein Air Base, was also there to mark the special occasion.

The Mexican-American family blended seamlessly Saturday night, both men sharing duties such as the father-daughter dance and presentation of la ultima muneca, or last doll. Ashley is their only daughter, though both men have two sons.

For Aracely Santiago, who has been dreaming of throwing a quinceanera for her daughter since Ashley was 11, the event surpassed her expectations.

And celebrating Latino traditions in Europe made the event that much more memorable, she said.

For partygoers such as Randy Dolph, whose son Matthias was part of Ashley&#8217;s court, the quinceanera was more than a birthday party.

For German-born Andrea Rodriguez, whose husband is Mexican-American, the quinceanera highlighted the Sanchez-Santiago family bond.