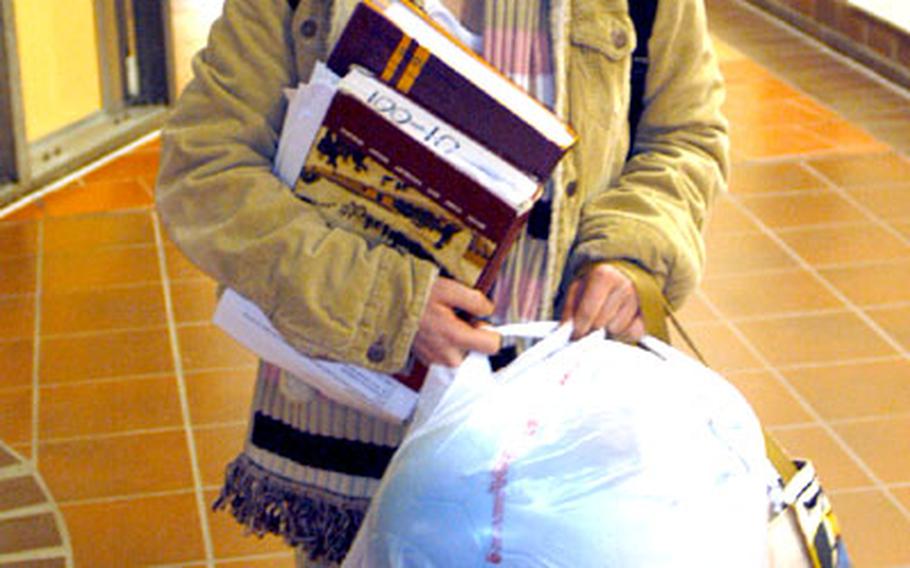 Laura Ingold, 16, a Patch American High School junior, saved money to buy a plane ticket for Ethiopia, where she will hand out soccer balls and school supplies. (Charlie Coon / S&S)

So she&#8217;s giving for Christmas instead of receiving.

Laura, a junior at Patch American High School, has spent recent months saving money for a plane ticket to Mettu, Ethiopia, where she will hand out soccer balls and school supplies she has collected for an orphanage.

Laura plans to help build a kindergarten and give soccer lessons to the children there.

Laura and several members of her church, which has &#8220;adopted&#8221; the orphanage, are making the annual trip. The 16-year-old said her interest was sparked by photos from previous trips hanging on the Patch Chapel walls.

Laura, the daughter of retired Senior Chief Petty Officer Bret and Amy Ingold, saved money by working at the base cinema for $7.90 an hour.

She also took a summer job at the Stuttgart Health Clinic for $5 per hour to help fund her $1,015 plane ticket.

She also brainstormed ways to collect soccer balls and school supplies, such as a school supplies trick-or-treat where residents gave out pencils and notebooks instead of candy.

In addition to her jobs, Laura is president of the junior class, plays soccer and runs cross-country.

Medical or missionary work might be in her future, she said.

She attends Protestant services but doesn&#8217;t consider herself a member of any faith.

Laura&#8217;s desire to help others comes as no surprise to Army Chaplain (Col.) Sherrill Munn, chaplain of the 6th Area Support Group.

&#8220;She has a very strong Christian faith, and is a very ethical, moral person and really involves herself into the community in any way she can.&#8221;

In Bahrain, one of her father&#8217;s previous stations, Laura said, she was impressed by how some people who were very poor were also completely satisfied with their lot in life.

They just wanted food and water.

Laura, who is scheduled to return Sunday, said she expected to find out if the Ethiopian orphans also wanted God in their lives.