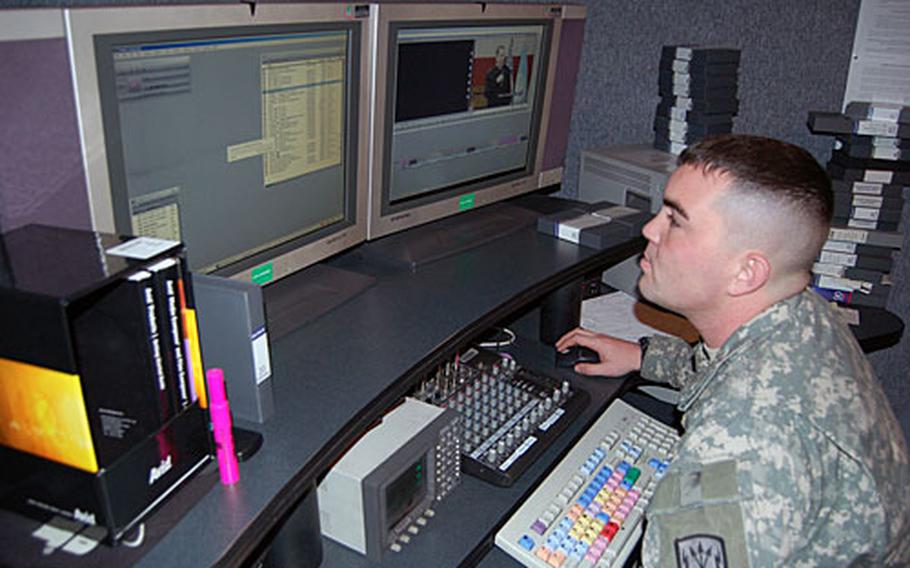 AFN viewers started with just one TV channel and no Internet.

Not that long ago, isolation from home seemed a routine part of life for servicemembers and civilians stationed overseas.

Finding a favorite TV show or catching a ballgame usually meant watching tape on the Armed Forces Network&#8217;s lone channel. No one had even heard of the Internet. And in the early 1990s, a call to friends or family in the U.S. cost $1 a minute from many Pacific locations.

The landscape certainly has changed.

The American Forces Network&#8217;s broad expansion and other telecommunications advances have given people media options once thought unimaginable. But the rapid-fire innovations also have fed into familiar problems, including a lack of competition and service issues at most bases, and corruption charges in one location.

In South Korea, contractor SSRT had been providing home Internet service at U.S. military installations until bribery allegations surfaced against its chief executive. The charges embroiled two Army and Air Force Exchange Service officials, whom the executive is alleged to have bribed so that his company could hold on to a $206 million, 10-year contract. (See story on Page 4)

And at Yokota Air Base, Japan, a contentious transition unfolded last year in which Americable International Inc. was forced out after a 10-year stay and AAFES signed a new deal with Allied Telesis. The two providers failed to reach an agreement on the transfer of Americable-owned infrastructure and equipment, leading to a gap in premium cable television and broadband Internet service still felt at the base.

Under command direction, Americable shut down its Yokota operation at midnight on Oct. 25, 2006, abiding by contract stipulations established a decade earlier.

The company had been banned from competing for new Department of Defense business after a federal jury convicted its former comptroller and other affiliated cable television companies on 72 counts of fraud and money laundering in September 2004. In August 2006, however, the company announced it had reached an agreement with the government to have the &#8220;debarment&#8221; lifted.

It wanted to remain at Yokota, but base and AAFES officials contended they could not negotiate with Americable during the corporation&#8217;s restricted status and had to move forward with the contract-bidding process.

In the months that followed, Allied Telesis set about completing its own fiber-optic network, also using existing base infrastructure and functions to help launch the massive project.

More than a year after signing their contract, it&#8217;s still unclear exactly when a full premium offering will be rolled out, Allied Telesis and AAFES officials said.

A mixed bag of cable television, Internet and telephone services are offered at other U.S. bases in Japan. Some installations plan to recruit new providers and bring in better capabilities to keep up with technology.

Residents across the mainland recently weighed in about service quality and package costs. Some lamented the lack of competing brands inside base gates.

Spc. Jennifer Galloway of Camp Zama&#8217;s 441st Military Intelligence Battalion said she pays about $40 a month for Internet service. She hasn&#8217;t had any problems with the service but said she wishes it was faster. Phone services available on base are &#8220;much cheaper than back in the States,&#8221; she added.

Viewers who live at nearby Sagamihara Housing Area get only the eight AFN channels and a handful of Japanese stations.

Kyle Hammitt, AFN Tokyo&#8217;s director of media, said Channel 4 on the Direct-to-Home satellite system currently delivers AFN-Prime Pacific to all Kanto Plain bases. Up until now, the detachment could only insert Yokota television spots, but that&#8217;s about to change.

&#8220;Our new DTH capabilities will allow us to include command information for each Kanto Plain installation,&#8221; Hammitt said. &#8220;In coming months, audience members will begin seeing products that provide information and support for their communities as well.&#8221;

Iwakuni Marine Corps Air Station residents can get TV and telephone hookups through base offices and Internet service from NTT Communications Corp., a private Japanese company.

Many argue the free television offered has less variety than services elsewhere and Internet speeds are slower.

The base TV lineup includes 42 channels but little premium programming such as MTV or ESPN, which are available on other bases through private cable providers.

More than four years ago, Iwakuni Marine Corps Community Services requested bids for private commercial vendors, but none stepped up because of the base&#8217;s small population and concerns about technical solutions within the system, said Capt. Floy Yates, head of the base&#8217;s communications department that manages all cable TV service.

However, conditions that discouraged vendors in the past are changing.

Thousands of servicemembers are to transfer to Iwakuni from Naval Air Facility Atsugi in coming years as part of realignment. Yates said the base is upgrading to a fiber-optic system, which will be completed by February 2009 as required by federal law.

However, Miller argued that phone and cable offerings are inadequate. Cable is &#8220;nonexistent&#8221; with limited TV channels, he said, and it&#8217;s a hassle to call stateside.

Tech. Sgt. Armagan Altunova of the 35th Logistics Readiness Squadron said she pays an extra $30 a month for long-distance phone service from Vonage so her family can call her overseas with a U.S. number. That&#8217;s on top of Internet and her base phone bill, which now totals about $130 a month, she added.

AAFES is scheduled to take over phone, cable and Internet services in late 2008, according to Misawa officials. It&#8217;s likely AAFES will hire a subcontractor to provide integrated voice, video and data services, similar to what&#8217;s been done at Yokota and Kadena air bases, said Capt. Christopher Corbett, the 35th Communications Squadron&#8217;s plans and resources flight commander.

Americable maintains a franchise agreement with Navy installations in Japan through 2011. Jim Smith, Americable president and CEO, said its products are available in all housing areas and officials are working on service for the Home Port Ashore program.

The company provides up to 53 television channels and Internet speeds up to 10 megabits per second, according to a company Web site. For an additional $29.99 per month, base residents also can sign up for unlimited Internet-based telephone services, which includes calls to the United States.

At Sasebo Naval Base, Americable is the sole provider of cable, Internet and Internet-based phone services. In past years, however, it was remote and didn&#8217;t receive the spectrum of services available at other bases served by the provider, said James Smith, Americable Japan regional manager, who works out of Yokosuka.

Stacey Weidetz, a dependent spouse who lives at Sasebo&#8217;s Hario housing area with her family, said she&#8217;s studying online for a master&#8217;s degree in education and uses Americable&#8217;s Internet service to connect with classes and send homework.

&#8220;We are continuing to invest in equipment and bandwidth to support higher Internet speeds to keep up with market demands,&#8221; Jim Smith said. &#8220;Our 10 Mbps service is the best in the area and substantially cheaper than offerings at other bases. We are always looking for more programming and ways to improve the quality of our channel lineup.&#8221;

People living in Yokosuka and Atsugi residential areas have an alternative for Internet service with Japan&#8217;s SoftBank Telecom.

Mediatti Broadband Communications is a major player at all military bases on Okinawa, delivering two tiers of cable television and cable Internet service in a contract that lasts through 2019.

Mediatti officials said the company is adding more bandwidth, which is scheduled to go online Nov. 20.

Roslyn McCumber, stationed on Okinawa with her husband, said her base cable and Internet service are both unreliable.

&#8220;The Internet service loses connection and then I have to go to the modem and reset it,&#8221; she said, adding that many of the cable channels are blurry, especially the Cartoon Network.