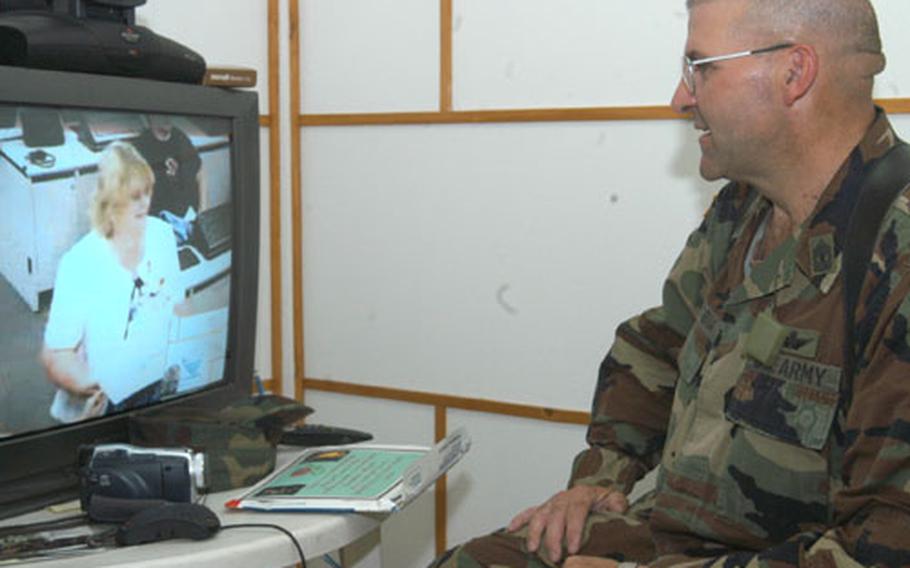 First Sgt. Delbert Jacobia of 1st Battalion, 108th Aviation Regiment, and his wife, Karen, renewed their wedding vows via video teleconferencing on their 30th wedding anniversary Monday. The couple, who now live in Salina, Kan., got married when Jacobia came back from a deployment to Vietnam. (Ivana Avramovic / S&S)

EAGLE BASE, Bosnia and Herzegovina &#8212; When Karen and Delbert Jacobia celebrated their silver wedding anniversary, they started planning to renew their vows five years later.

But then Delbert deployed to Bosnia with the 1st Battalion, 108th Aviation Regiment &#8212; a National Guard unit from Kansas &#8212; and it looked like it would not happen.

That is until some fellow soldiers suggested the first sergeant take advantage of video teleconferencing.

So on Monday, their 30th anniversary, the Jacobias held their hands out toward each other&#8217;s face on the TV screen and renewed their vows.

In Bosnia, a chaplain and a fellow soldier sat in the VTC room with Delbert taping the event for the couple, while the Jacobias&#8217; two daughters, five grandchildren, pastor from home and friends from church were with Karen in Salina, Kan.

Getting married in the first place was challenging.

While Delbert was in Vietnam and Karen was preparing for a July wedding, his assignment was extended when orders for the Navy ship he was on were changed. They had to put off the wedding.

But then another change of orders got Delbert home early, and the couple got married on the last day of June &#8212; just a week after he returned and ahead of the original wedding date.

The Jacobias have proved some old maxims wrong. They were both young, only 19, and had spent less than a month with each other before the wedding. Their closest communications were by mail and tape recordings. Yet, their marriage has flourished.

These days the couple makes phone calls and e-mail. Communications is easier. But they still appreciate all the letters saved from years ago.

Some things will still have to wait until they are together again, a honeymoon and a kiss they both wish they could have had, but they got to make their plan come true.

The distance between them makes Delbert miss his wife even more, he said.