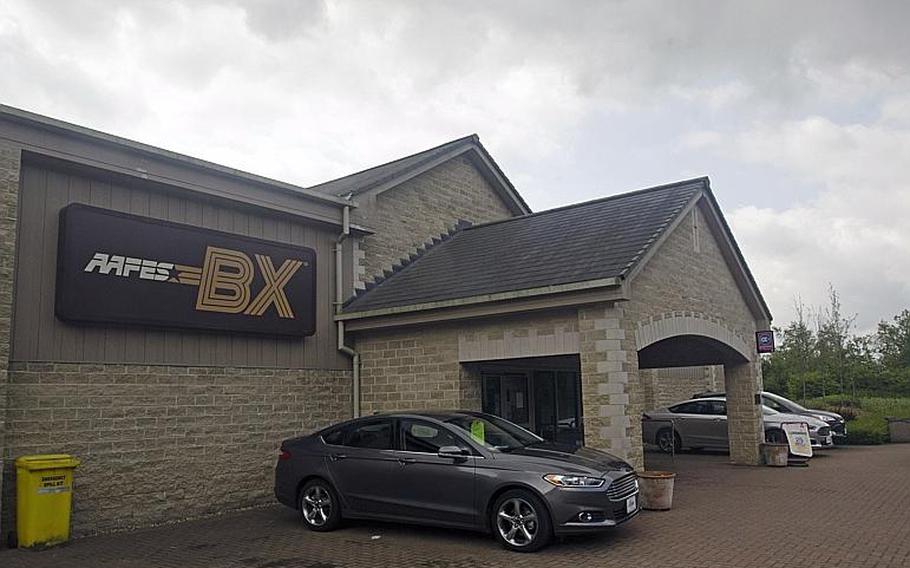 Army and Air Force Exchange Service and commissary services at RAF Menwith Hill, England, will have their footprints reduced in response to the reduction of 500 personnel at the base by October 2016. A Department of Defense review determined technological streamlining of operations could allow for the reduction in personnel. Adam L. Mathis/Stars and Stripes (Adam L. Mathis/Stars and Stripes)

RAF MILDENHALL, England — A technological streamlining of operations at RAF Menwith Hill is behind the decision to cut some 500 servicemembers and civilians at the base in central Britain.

U.S. European Command announced Wednesday that the 421st Air Base Group, which provides base support at Menwith Hill, “and other U.S. military units will be deactivated.”

A worldwide Department of Defense review found that operations at Menwith Hill could be streamlined by doing the same job with more technology and fewer personnel “so that kind of drove the reduction,” said Capt. Michael Hertzog II, a spokesman for U.S. Air Forces in Europe-Air Forces Africa.

Hertzog could not elaborate about the nature of technology involved or which operations were being streamlined at the National Security Agency base in Yorkshire. But he alluded to wider improvements in computer and information technology.

“It’s fairly consistent with ... what’s been going on across the spectrum, ... as we improve everything from ... server capacity to the hardware that we’re using; we’re doing more with less,” Hertzog said in a telephone interview.

The reduction in operation personnel also will affect support staff, which led to plans for downsizing the 421st Air Base Group into a squadron, he said. It has not yet been decided how many airmen will make up the squadron, he added.

Squadron Leader Geoff Dickson, the Royal Air Force commander at Menwith Hill, said Wednesday that the reductions will affect all areas of the base and they “will be spending the next few months deciding what the exact footprint will be for RAF Menwith Hill.”

The reductions, however, will cut into the Army and Air Force Exchange Service and commissary locations at the base, which is more than 100 miles from the majority of other U.S. bases with those services in England.

“AAFES will still offer products for sale and so will DeCA (Defense Commissary Agency), but it’s not going to be the same facility footprint that it is now,” Hertzog said.

Dickson, however, said that the change will not affect the base’s mission capability.

“There will be no impact on the mission whatsoever, and Menwith Hill is not closing and the mission will continue,” Dickson said.