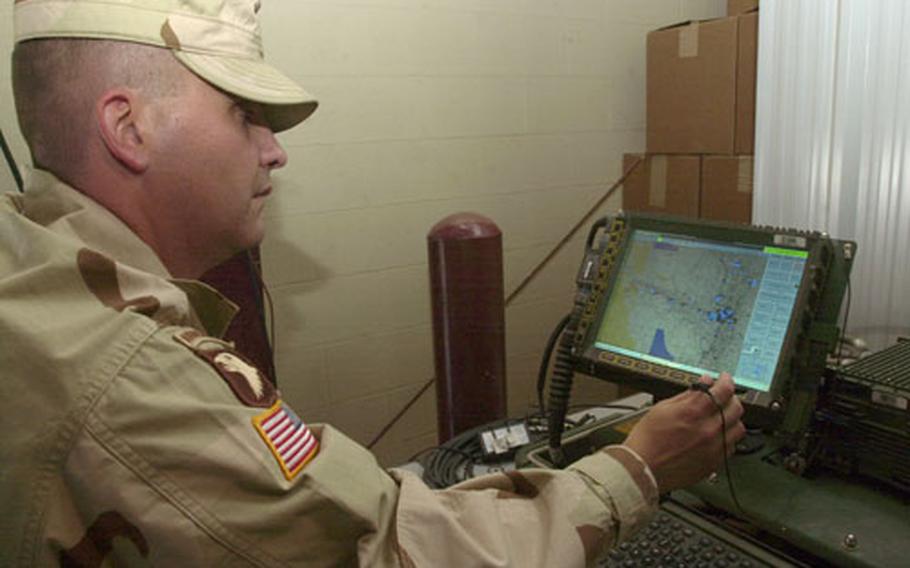 Army Maj. Michael Martyn, Blue Force Tracker program manager, demonstrates the system&#39;s capabilities by showing equipped vehicles currently on the ground in Iraq. Martyn pulled them up on the screen from a warehouse on Camp Arifjan, Kuwait. (Fred Zimmerman / S&S)

CAMP ARIFJAN, Kuwait &#8212; A relatively new way of viewing the battlefield has commanders in operation centers and troops in the thick of the fight now on the same computer screen.

Those vehicles and battle commands equipped with the Blue Force Tracker can now watch an unfolding fight in almost real time, according to Army Maj. Michael Martyn, tracker program manager. The system allows users to track vehicles on the battlefield and identify enemy positions and trouble spots.

It is made up of several computers, monitors, a Global Positioning System, and satellite communications gear. A completely installed system costs about $20,000 a vehicle.

Each system has a touch screen that lets the user choose between a map or an satellite photo to display forces in the region. If a commander touches a blue icon on his screen, he will quickly learn everything from the type of vehicle and what role the crew is serving to its speed and unit.

&#8220;It gives you an overall picture of where your blue buddies are,&#8221; said Greg Garrett, system integrator.

Blue Force Tracker is a cousin of Force 21 Battle Command, Brigade and Below, or FBCB2, which uses a similar set-up, but a network of strategically placed radio nodes are used to transmit data via satellites, Garrett said.

FBCB2 was introduced about eight years ago and BFT was created less then five years ago. Garrett said the latter system was designed to link units and commands in the rugged terrain of the Balkans, where its predecessor wouldn&#8217;t work.

Half of the vehicles that have the latest system in Iraq were equipped in Kuwait, Garrett said. Not all vehicles were outfitted, he added, but several in each unit were just in time for the start of the war.

&#8220;We had installers jumping off the vehicles after finalizing [the system] as [the vehicles] crossed the berm,&#8221; Garrett said.

Since the system talks via satellite, Martyn said it has a range that far exceeds typical radios. It especially comes in handy when calling for something like a medical evacuation, he said. Using the GPS, the command knows exactly where to send the help.

Martyn said while the system isn&#8217;t real time, it does update often, allowing all who are watching to see progress.

It also allows an individual vehicle to electronically identify a spot on the map, letting everyone else know about potential trouble.

&#8220;You can mark where the enemy is and everyone can see that at the same time, allowing a quicker reaction time,&#8221; Martyn said. The system could also warn other vehicles of a threat, such as the location of a roadside bomb.

Martyn and Garrett said they are currently installing the system in armored Humvees in Kuwait. They said their crew of five installers can set up an average of 10 vehicles a day. Once those vehicles head to Iraq or Afghanistan, they are turned over to the different rotating units to keep the technology in theater.

So far, military leaders seemed pleased with the system&#8217;s results.