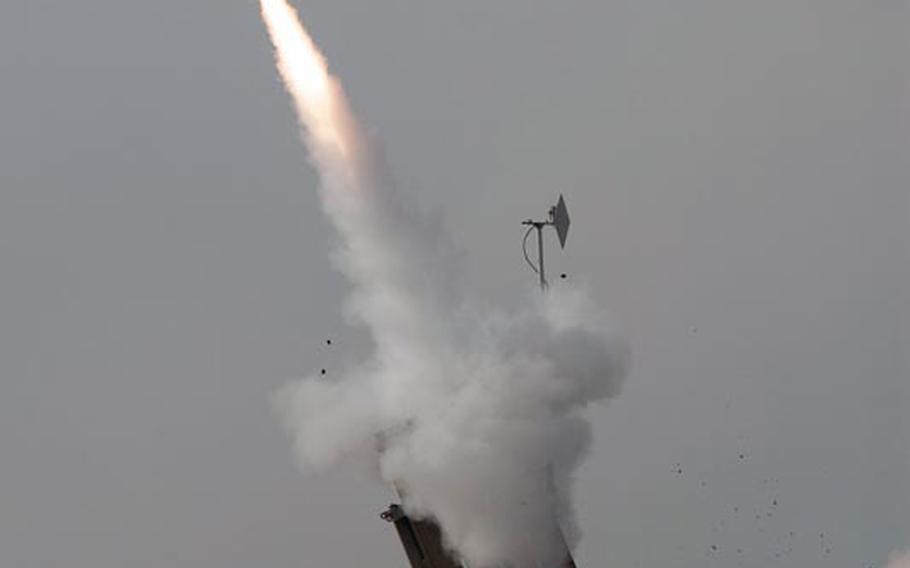 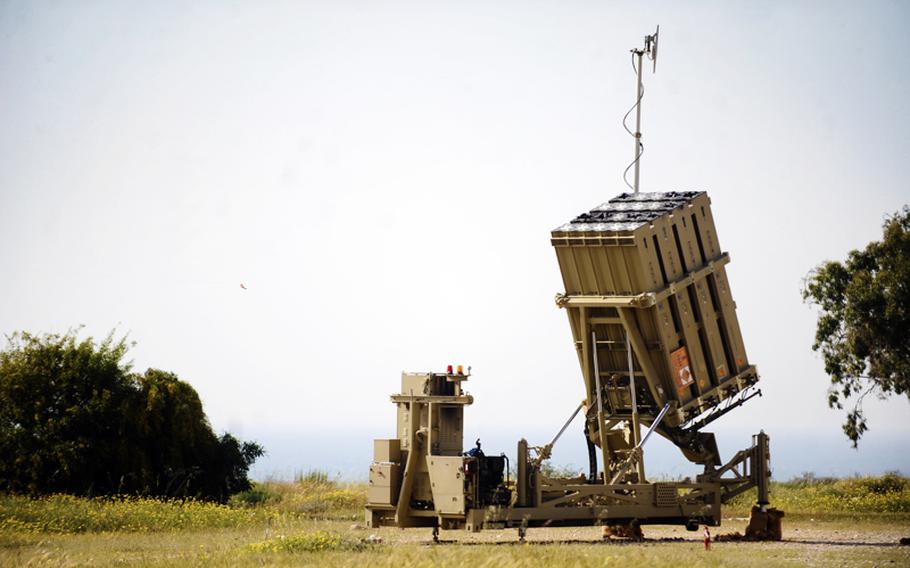 Short-range missiles fired by Hamas at Israel&rsquo;s major cities last month and the potential long-range threat of the rocket North Korea launched this week are suddenly sharpening interest in capitals around the world over a new generation of missile defense systems that can defend against hostile neighbors.

On Friday, for example, Defense Secretary Leon Panetta announced the deployment of two Patriot missile batteries and 400 American military personnel to Turkey to help protect the NATO ally from the missile threat posed by the disintegrating Assad regime in neighboring Syria.

The concept of shooting down enemy missiles has been around at least since World War II, when British fighters flew sorties to destroy Nazi bombs aimed at London.

Many criticized Star Wars as unrealistic, but today, with technology advancing rapidly, some of its goals appear to be within reach.

While America&rsquo;s adverseries and its allies are making strides in their efforts to develop long-range ballistic missiles, technological leaps are enabling the U.S. and others to build increasingly robust missile defense systems.

And the success of Israel&rsquo;s Iron Dome system against unsophisticated short-range Hamas missiles fired at densely populated urban areas was touted by experts as a potential game-changer.

The Iron Dome system uses a tracking radar to locate approaching threats and determine where they will likely land. An intercepting missile is then released to destroy the incoming rocket, according to the Israeli Defense Forces.

&ldquo;Iron Dome is one of the most practically effective missile defense systems we have ever seen in the field,&rdquo; said Shashank Joshi, a Middle East specialist with the Royal United Services Institute in London. &ldquo;It represents a major shift for Israel.&rdquo;

The Iron Dome system was praised by Secretary of Defense Leon Panetta during a joint news conference late last month with his Israeli counterpart, Ehud Barak.

In the days since the conflict was quelled by a Nov. 21 cease-fire, Iron Dome has been credited with averting a ground conflict in Gaza by preventing the kind of civilian casualties in Israel that could have pressured the government into escalating its offensive efforts. More than 150 Palestinians were killed during the eight-day conflict. By contrast, six deaths were reported in Israel.

Of the 1,500 missiles fired toward Israel, Iron Dome intercepted 421 rockets aimed at Tel Aviv and Jerusalem, Israel&rsquo;s largest cities and home to more than 3.5 million people, according to Israeli officials. Missiles that were headed for unpopulated areas were not targeted.

&ldquo;This phenomenal success has told the public at large and the world that missile defense works and it saves lives,&rdquo; said Riki Ellison, chairman of the Missile Defense Advocacy Alliance, a lobbying group that supports the development of missile shields. &ldquo;Israel didn&rsquo;t go to war. They didn&rsquo;t go into combat formation and go into Gaza. It was a peaceful solution.&rdquo;

Barak told reporters in Washington last month that the deterrent effect goes beyond the technical aspects of the system. Just the knowledge of the existence of &ldquo;such an effective system, especially when we&rsquo;ll be equipped with many more interceptors, it will change the balance of contemplation on the other side,&rdquo; he said.

Proponents argue that similar shields in other regions plagued by low-tech air attacks could also transform the pace of those conflicts by discouraging strikes that could be rendered ineffectual by interceptor missiles.

Ellison said a revamped Iron Dome system could prove significant against mortar attacks in Afghanistan or in Syria, where airstrikes have led to numerous civilian casualties.

While Iron Dome became the darling of the defense community in the aftermath of the eight-day conflict between Israel and Hamas, North Korea&rsquo;s rocket launch earlier this week &mdash; traveling a third of the 5,000 miles needed to reach the continental United States &mdash; refocused attention on the need for medium- and long-range missile defense.

&ldquo;At the strategic level, this [Iron Dome] is important, but this is not an answer to ballistic threats,&rdquo; said Natan Sachs, an Israel expert at the Brookings Institution&rsquo;s Saban Center for Middle East Policy.

The U.S. military and its defense contractors are touting the increasing accuracy of their medium- to long-range missile defense systems.

The U.S. Army&rsquo;s new Terminal High Altitude Area Defense (THAAD) system has hit nine out of nine targets during testing over the past five years. THAAD and the PAC-3 missile fired by Patriot batteries performed flawlessly during a recent exercise that involved a simulated attack by five airborne targets, according to Lockheed Martin Corp. officials.

&ldquo;It is a very deadly system,&rdquo; said Theodore Postol, a science professor at the Massachusetts Institute of Technology, who has analyzed the Patriots. &ldquo;Iron Dome is really not the same as Patriot in that it is shooting at much easier targets.&rdquo;

The THAAD and PAC-3 systems are part of an increasingly sophisticated, worldwide and multinational missile defense network. The network includes floating Aegis Ballistic Missile Defense (BMD) and the Phalanx Close-In Weapons System, which serves as the last line of defense against anti-ship missiles and also protects forward operating bases in places like Iraq and Afghanistan from mortars.

The U.S. is installing Aegis BMD equipment in more ships every year and it can deploy them anywhere they are needed.

At the same time it&rsquo;s planning to build ground-based versions of the Aegis BMD system &mdash; dubbed Aegis Ashore &mdash; in Romania in 2015 and Poland in 2018 as part of President Obama&rsquo;s &ldquo;Phased Adaptive Approach&rdquo; to missile defense.

Aegis Ashore will be installed in Hawaii next year for training purposes and ground stations could be placed in other places where there&rsquo;s a potential threat to U.S. forces, such as Guam, according to the system&rsquo;s maker, Lockheed Martin.

Last month, for example, the U.S. Defense Security Cooperation Agency, which facilitates sales of the equipment to foreign governments, notified Congress of more than $7 billion of proposed sales of THAAD launchers, fire units, interceptors and early warning radars to the United Arab Emirates and Qatar.

The PAC-3 has been sold to Japan and Taiwan. South Korea recently purchased used Patriot batteries from Germany, although they are not outfitted with the PAC-3, said Orville Prins, vice president of international air and missile defense business development at Lockheed Martin&rsquo;s Missiles and Fire Control business.

Rio Hinata-Yamaguchi, a Japanese defense expert doing research at Hawaii&rsquo;s Pacific Forum, said the more North Korea develops its missile capability, the more incentive there is for Japan, which already has four Aegis BMD destroyers and plans to acquire more, to invest in missile defense.

&ldquo;Japan is very worried about anything that North Korea does with nuclear or missile capabilities,&rdquo; he said. &ldquo;Japan has good reasons to be concerned, especially if it can reach all of the Japanese archipelago.&rdquo;

Iron Dome, which was put into action last year to fend off a steady stream of attacks from Hamas, did not gain international recognition until the recent Gaza conflict.

&ldquo;There was a lot of skepticism initially, both in Israel and the United States, about the ability to do what they appeared to have done,&rdquo; said Eric Edelman, a former undersecretary of defense for policy in President George W. Bush&rsquo;s administration.

That now has changed.

Nations worried about attacks from belligerent or untrustworthy neighbors are expected to be among the first to demand Iron Dome-like systems, fueling the growth of the missile shield industry and driving new innovations, analysts said.

&ldquo;These missiles were relatively unsophisticated,&rdquo; Joshi said. &ldquo;If you try to do the same thing with an Iranian missile or a Syrian ballistic missile or a Chinese missile, you will find they know how to cope with this missile defense. Any national adversary that the United States is worried about, like China, would have very little trouble overwhelming a missile defense shield.&rdquo;

Aegis failed to engage one of the targets it was supposed to shoot down during a recent exercise, officials report.

Missile defense has yet to shoot down a North Korean missile and it wasn&rsquo;t able to protect South Korea&rsquo;s Yeongpyong Island when it was shelled by the North Koreans in November 2010, Hinata-Yamaguchi said.

The director of Lockheed Martin&rsquo;s Missile Defense Program, Nick Bucci, said Thursday that Aegis BMD has made rapid strides since it was fielded in 2004 as technicians have added more powerful computers and complex software to better target missiles.

The system is also being linked to land, sea, air and space sensors that can stream mountains of data back and forth before an enemy target is engaged. The system is being integrated into air defense systems that scan the skies and respond to enemy aircraft as well as missiles.

The projected expansion of the missile defense market is especially noteworthy amid growing pressure to decrease military spending across Europe, in the United States and in other financially-struggling nations.

&ldquo;Countries want to be able to reassure their public that they can protect them,&rdquo; said Patrick Cronin, a senior adviser at the Center for a New American Security, a nonpartisan policy institute based in Washington.