Technical upgrades on Navy’s fleet could save time, save lives, save ships 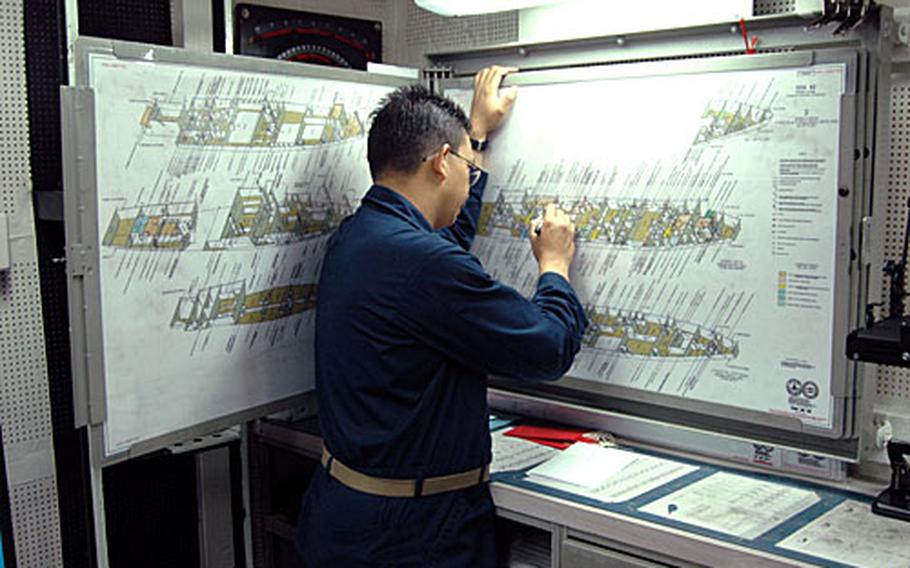 Until now, Navy ships have relied on schematics, like those pictured here, to track the status of spaces effected by floods, fires and other damage control issues. With a new computer system, however, laptops and software are joining firehoses and breathing apparatus to help save the ship. (Chris Fowler / S&S)

YOKOSUKA NAVAL BASE, Japan &#8212; A nearly completed technology update on all of the Navy&#8217;s cruisers and destroyers is designed to save time, save lives and save the ship.

The system replaces a more time-intensive, manual system of tracking damage status during combat or other shipboard emergencies.

During general quarters &#8212; a heightened state of readiness during combat &#8212; a ship&#8217;s central engineering control space, called Damage Control Central, acts as both an emergency command center and a public works hub.

The plates &#8212; basically a diagram of the ship &#8212; identify where things are and let users quickly track what is on and offline.

The new DCTMS opens lines of communication by networking repair lockers and central in a virtual environment. Each locker has its own plotter who inputs onto a shared set of virtual DC plates. Changes are seen in real time by all users.

Nash was at Afloat Training Group, Western Pacific, earlier this month teaching sailors how to use the new system being installed by Naval Sea Systems Command.

The system, which places a dedicated laptop in each locker, can use information it collects to generate drills a ship&#8217;s damage control sailors can use to hone their skills, he added.

&#8220;If we lose a (damage control) locker, we can just plug the laptop into any LAN drop and still be able to plot because everything is stored on the ship&#8217;s server,&#8221; Bradshaw said.

Petty Officer 2nd Class Carin Deitler, a plotter in the Lassen&#8217;s Damage Control Central, said DCTMS will streamline communication and save time &#8220;because not as many people trying to talk at once. That way, I can focus on helping people find safe routes around the ship.&#8221;